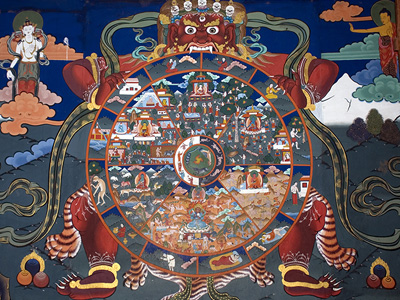 Some parts of the Dharma seem more plausible than others for us of the Euro-American cultures. While we easily take to “cause and effect” and the benefits of meditation, rebirth or cyclic existence, a concept central to Buddhadharma, gives many of us pause.

In grappling with spiritual concepts, often our bottom line is whether an explanation is plausible in the light of science. From the scientific point of view, when the body dies, that’s the end—no afterlife, no rebirth. Cause and effect apply only physically without a moral dimension. Meditation’s purpose is to manage our stress.

On the other hand, cyclic existence appears to be ingrained in some cultures. I say this partly because of a surprising statement I heard in a documentary on the 1989 Tiananmen Square protests. One of the Tiananmen activists—a nominal atheist—in a moment of supreme frustration says “Chinese people are so stupid! I will never be reborn as a Chinese.”

I have no idea whether he “really” believed in rebirth, but his use of that expression shows how the concept of rebirth stubbornly persists in officially atheist China.

In pursuing the Dharma, I have learned to be provisional in my doubts. I understand that what I do or don’t believe is always my current guess about what the Dharma is saying—not necessarily what Dharma is actually saying. If I can’t wholeheartedly accept a concept, I put it on the back burner.

Maybe it’s the power of purification practice or doing the daily death meditation but, after 40 years of rebirth simmering on that back burner, I am now on board with the idea of cyclic existence. A clear light subtle mind persisting after the body dies—free of the personality of Tanya but having propensities toward some activities and not others—seems completely plausible to me.

Since the mind is formless and the body is form (even conventional science will tell you that), the brain might not generate thought but rather mediate between raw physical experience and non-physical thought. It’s not much of a leap from there to imagining a continuous stream of thought that lightly associates with a living body and flows to a new body when that one dies. Why not?

How is this idea stranger than a poisonous gas (Cl) and a soft silvery metal (Na) combining to form table salt? Or that our bodies are created from a single cell with a construction manual “written” in four chemicals (CGAT)?1 Or that time is slower at the tops of mountains than at sea level?

The intent of every word the Buddha spoke was to liberate us from suffering. Without rebirth what are we liberating? In our heart of hearts, are we only after a mitigation of our self-inflicted emotional wounds? Or the end of cancer and war? If we are free from the sorrows of this life when we stop breathing—why get up at 5 am and meditate? Relief will come soon anyway, and we need the rest.

When we don’t accept rebirth, are we less than a level one practitioner?2 Are we level zero practitioners who can’t even imagine a next life let alone work for one of fortune and leisure?

Sure, like you, I believe in my secret heart, against all evidence, that I alone will not die. Or in the worst case scenario, after a long life including long bike rides and a razor sharp wit in my 90’s, I will just not wake up one day. Even if I can’t avoid death, there will be no sickness and old age for me!

The evidence is clearly against us. The obituaries are numerous, my friend.

Let’s be honest. Isn’t this tightly held belief that “I can’t end” really the basis for the stubborn insistence on the unique reality of this current life and no other?

I will die. Tanya will end. But the world will not end then. Beings will still be born. There will be future lives—we can at least agree on that. And I must ask: If there is no real “my” life now, only a collection of parts, effects and causes, terms and concepts, what does “my future lives” mean?

There’s a new urgency and a new optimism in my practice—on and off the cushion. Some ideas are making real sense to me that up to now had me scratching my head. There’s a shift in my attention. I think more about what to purify and what to stabilize—and what can I throw forward that will be useful. I make a strong effort to stay focused on what I’m doing on the cushion. Don’t laugh, I actually try to meditate on emptiness—slippery as that is—and sharpen my awareness attempting to pierce this intuitive sense of self-existent external objects granting pain and pleasure.

Accepting rebirth will do that to a person.

Find more on these topics: death

Virtuous karma and its effects