You are here: Home > Practical Buddhism > Prison Dharma > By Incarcerated People > On Addiction > Intoxicants
By R. L. on Jun 18, 2011 in On Addiction

It should have been obvious that fateful day that the use of any intoxicating beverage would, at best, be extremely foolish. After all, I had witnessed firsthand the devastation alcohol had caused my own family.

Rather than recall the painful memories of my childhood, seeing my father laying unconscious on the front porch of our home, or the living room floor if he was able to actually make it inside the house, urinating on himself, or returning home after a night of drinking to beat and abuse my mother, younger brother and myself, I ignored those telling memories, and indulged in drinking alcohol. 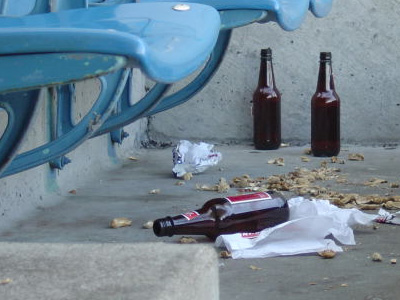 Intoxicants can make our otherwise peaceful and pleasant personality change to a more aggressive and coarse one. (Photo by Malingering)

It was a simple enough act in itself, and one that most people wouldn't think twice about. However, for the biological son of an alcoholic, it was to be the harbinger of death and destruction. After consuming half a case of beer, my otherwise peaceful and pleasant personality changed to a more aggressive and coarse nature, to the point of becoming provocative. As a result, when confronted by a young man who found it offensive that I was in a drunken stupor in a public park and threatened to summon the police to have me arrested, I argued with the person briefly, and then repeatedly shot him until he was dead. In my drunken and confused state there was no rational thought process at work, nothing that would leap to the forefront and say, "This is terribly wrong. You cannot take a life." Instead, within a few short irrational minutes, I had taken the glorious life of another human being. These events took place more than 33 years ago, and as a result, I have remained incarcerated since.

In the brief time it took to commit the irrevocable act of taking a life, I also forfeited my own life in many respects. In a convoluted way, I succeeded in bringing devastation to the families and friends of two human beings. People who played no part in the actual event became victims as well.

Throughout these many years since that terrible day, I have relived those events time and time again. And while I am genuinely remorseful, I realize that there is nothing that I can say or do that will ever bring my victim back to life. What I should have done should have been done before I ever took a single drink. I should have acknowledged the fact that alcohol consumption can and often does result in tragedy, and acted accordingly. I should never have imbibed.

If asked today, I would caution anyone against the dangers of drinking alcohol. This should be fairly obvious to anyone, not only in terms of such common place things as traffic fatalities, but in the number of people held in jails and prisons across the country, who committed any number of crimes as a result of intoxicants. There is no way to underscore the dangers strongly enough!

Find more on these topics: karma