Coming out of a three-year deity retreat, Petra McWilliams was invited to talk about the most important realization she had during that time. “There’s no way!” was her first thought—so much had happened. Four and a half seconds later, she knew what she wanted to say:

For me, the most important aspect of this retreat was really experiencing the difference between understanding things intellectually, and even wholeheartedly believing that they were true, and having a real heartfelt life-transforming realization. The lamas always say that there’s a difference. I’d experienced so many lamrim topics that for me were intellectual, or something I wholeheartedly believed in, but feeling them transform into realizations was one of the most striking and significant aspects of my retreat. I want to talk about one of them, because this one happened early on, and set the tone for a lot of the rest of my work in retreat. 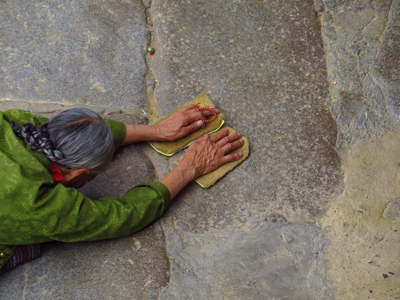 A large number of my epiphanies happened while face down on the cold floor, prostrating. (Photo by Cam Lewis)

It happened on January 15, 2001, the first year in retreat, and the birthday of the great bodhisattva Martin Luther King, Jr. As I was doing my prostrations—usually when I woke up, around 3:30 or 4:00 A.M., I would do a round of prostrations to the 35 Buddhas, and I found that a large number of my epiphanies happened then, face down on the cold floor—I suddenly flashed on my mother, who had passed away twenty years ago. I thought about my selfishness and lack of kindness to her, especially as a rebellious teenager. In that moment, I had an enormous realization of the depth and extent of my self-centeredness. And on top of that, I realized what the lamas have always said, and I had heard over and over again for years and thought I believed: that self-centeredness is the source of every moment of suffering that I’ve ever had in my entire life. It hit me like a ton of bricks!

For the next three days I just sat on my cushion crying almost non-stop. I spontaneously reviewed my entire life, and saw that every moment of suffering that I’d ever experienced, from a moment of slight irritation to the lifelong difficult relationship with my father, was created by my self-centeredness; not to mention all the suffering that I’d created and caused other people to experience. And it was just relentless—my mind couldn’t stop going through this process. At one point I was desperately looking for some exception to the rule that self-centeredness had caused every moment of suffering. There wasn’t one exception! So I just cried and cried. It was so intense.

At that point I remembered one of my favorite teachings, the Seven Point Mind Training by Geshe Chekawa; and the Five Forces, especially the Fourth Force, "to rip something out by the heart." In Liberation in the Palm of your Hand, Pabongka Rinpoche says on that point, when self-centeredness raises its ugly head, just bash it. I decided to take this teaching as my heart advice, and to live my life by it. I started applying it with fierce determination because I’d just seen this relationship between self-centeredness and my own and others’ suffering. And so every morning even before I got out of bed, I’d say, "I’m going to do it! I’m not going to give it an inch. I’m just going to bash it whenever it raises its head?" I was relentless and determined.

And in doing this, I noticed another relationship that the mind training texts also mentioned—that self-centeredness and self-grasping are inextricably linked, even though they’re different. And I saw this too, that, as I was tearing out the heart of my self-cherishing I was also going for the jugular of my self-grasping and my ego. It was an extremely uncomfortable and edgy process of not letting my ego have any slack either.

I remember reading a transcript of a teaching by Chogyam Trungpa Rinpoche on emptiness. In the question and answer session at the end of the teaching, one of his students asked him why it’s so hard to see reality the way it is. Rinpoche said, "I think largely because we’re afraid to see it." And the student said, "Why are we so afraid?" And he said, "Because we want an umbilical cord attached to our ego through which we can feed all the time." And I saw that even in total isolation, in a yurt in the middle of nowhere, I was still thinking of all these tricky, sneaky little ways to feed my ego. It’s incredible what you do to feed your ego.

As I relentlessly bashed both the self-cherishing, and the self-grasping, I noticed how my ego felt stripped, and shredded, and how much my sense of identity was linked to these two things. And as I was bashing them I felt like I was ripping my identity to shreds. It led to an incredibly uncomfortable experience of "groundlessness," as Pema Chodron expresses it, where there was nothing to hang on to, because everything I had been hanging on to, and calling "me," just wasn’t allowed any breathing room anymore.

The more I got used to it, the groundlessness gave way to an incredible feeling of spaciousness. Nothing to hold on to meant nothing to limit me, nothing to stop me. This led to some amazing meditative experiences in which I felt my ego, self-cherishing, and self-grasping strip away. In bodhicitta meditations I would feel there was no "I" between me and the other sentient beings—there was no little, isolated, tightly defined ego-grasping "me." Those barriers had just come down. I would send out light rays to benefit sentient beings, and it felt like there was no more "me," just this huge heart filling the universe. It was a feeling of poignant bittersweet rapture—an incredible experience of bliss that had a poignant edge because I felt the suffering. There was no "I" limiting me from the feeling that I really could benefit sentient beings. And I experienced a physical sensation of limitless bliss.

And I realized once again that what the lamas have always said is so true—that to overcome self-cherishing is the highest happiness; that what we’ve been used to thinking since beginningless time—that looking out for ourselves will give us happiness—is completely wrong. It’s just the opposite. Only by overcoming self-cherishing completely can we have the highest happiness. And [this happiness] was just a thousand-fold stronger than any feeling of happiness or bliss that I’d ever had in my life. It just went on, day after day after day. And the only reason that that happiness was possible was because there was no more "me" to get in the way. It didn’t have anything to do with me at all. And I saw how renunciation leads directly to bodhicitta—out of the ashes of this level of renunciation rises the phoenix of bodhicitta.

I saw from my experience that to get to this point you need to be willing to give up everything you’ve thought since beginningless time would give you happiness, comfort and security; you just need to strip it all down and give it all up. And what you’re really doing is just releasing yourself from this prison that keeps you trapped, trapped in this lie called "self-cherishing," and that’s what keeps you trapped in samsara.

Because I’ve had a taste of this experience, I just keep trying; being willing to go to the edge—so that I can live there all the time, that I can get to the point where bodhicitta is my permanent address! And just having the taste of that experience, and knowing what real happiness is, and what the cause of that happiness is, is by far the most significant experience of my retreat. And I will never give up until I get there.

Article reprinted with permission of Mandala Magazine, where it was first published.