Raymond reflects on how illness and disability helped him to integrate the Lamrim teachings more deeply into his life.

When I took refuge nearly eight years ago, it was because I had fear and faith: fear of the sufferings of samsara, and faith that the Three Jewels would protect me from these sufferings. Since taking refuge, I have tried diligently to be devout, have studied the lamrim (Gradual Path) teachings many times over, have received teachings from amazing gurus, and have maintained a constant practice. In particular, I have made a point of studying the teachings on death and impermanence and karma. It has also been my especially good fortune to receive teachings and guidance from Venerable Thubten Chodron and Venerable Sangye Khadro.

A new urgency to practice

However, there has never been a time during my Buddhist life when I have been more aware of the sufferings of a human rebirth—birth, old age, sickness, and death—than in recent months. There is a new urgency to my study and practice of the Dharma, that should always have been present. Unfortunately, the real importance of fully understanding and practicing the Dharma was something I failed to fully grasp. At least, until I was unexpectedly struck with a serious medical condition in June, 2007. My entire perspective changed then, which is not to say that I had not previously taken the Dharma and my practice seriously. I always have. However, because of my traditional Western attitudes, it was extremely difficult for me to eliminate the three poisons of attachment, hatred, and ignorance from my life. I had never seriously considered the fragility of human life or the inevitability of my own death, nor had I much experience with actual physical suffering. All of this was basically an abstract concept, something that would never touch me personally.

Being awakened early one morning to severe pain in my right leg and lower back, and then realizing I was unable to sit upright or stand without incredible pain and difficulty, radically altered my perspective. As the severity of this condition continued to progress during the next few weeks, it became impossible for me to stand or walk. I could only get from one place to another by wheelchair and it was excruciating.

Several weeks later, I began experiencing similar pain in my upper body and right arm, and began losing the ability to use my right hand. After months of enduring pain and losing the tactile sensation in large areas of my body, I was diagnosed with a medical condition known as neuropathy. Basically, the nerves of my body are randomly and selectively dying or becoming dormant. The process is progressive and painful, and as yet no definitive reason has been found for its cause. It is a frightening and life-changing experience, to be sure.

The determination to practice

One of the most profound changes in my life has been the inability to continue my daily practice as I had always done it. Such ordinarily easy things as sitting in the lotus posture to meditate or performing full-length prostrations was impossible. The pain was so severe and pervasive at times that it was difficult simply to go for refuge. I was unable to adequately do practices such as White Tara, Chenrezig, confession to the 35 Buddhas, and other meditations. There were times when it was even difficult to remain focused long enough to read the lamrim.

This was a low point in my life, because I was failing to maintain my obligations to my gurus and to the Buddhas. It became obvious that I had to make changes, that I would have to adapt to my new situation so that I could continue my practice. I was determined to persevere, and with the guidance of Venerable Thubten Chodron, I was reminded of the importance of maintaining my practice. She reminded me of the importance of maintaining mindfulness and practicing such basic Buddhist principles as compassion for others and occupying my body, speech and mind with virtue. She encouraged me to embrace my sickness, seeing it as the ripening of destructive karma that was now being purified. As the lamrim says, sickness and suffering are like a broom clearing away the dirt of destructive karma from our lives.

Transforming illness into the path

I realized that I should be happy because the destructive karma has ripened in this lifetime, and although its ripening is painful, it is possible to eliminate it so that it will not be a cause for rebirth in a lower realm. As I grew happy that this karma ripened as my illness, I recalled that by practicing the taking and giving meditation (tonglen), I could take on the negativities and obscurations of sentient beings. I realized through my meditations that I could relieve sentient beings of all their suffering. This has been a tremendously inspiring practice that has affected me deeply. 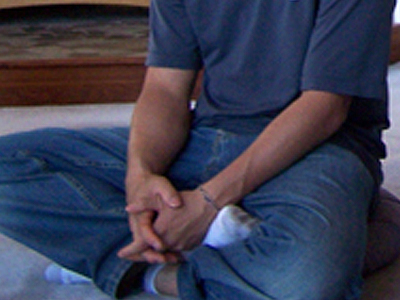 When dealing with illness, it’s important to maintain our practice and see the illness as as the ripening of destructive karma that is now being purified.

With the passage of time and the aid of various medications, the severity of my pain has diminished somewhat. It has changed from a constant burning sensation to that of numbness and an occasional shooting, stabbing pain. I have regained the ability to stand and walk, albeit with a limp. My arm and hand are a bit of a different story, since I have not regained full use of my hand. The progression of this terrible condition has continued and now involves other parts of my body. Fortunately, though, I am once again able to sit in lotus posture for meditation and can once again perform full-length prostrations to my gurus and the Buddhas.

My practice has never been more fulfilling or inspiring, and like never before I realize the extreme urgency—how very little time I have in this human rebirth—to purify my past negativities and live virtuously, ethically, and be motivated solely by the Buddha’s teachings. The lamrim tells us that unfavorable conditions are an incentive to engage in virtue. The unfavorable conditions that suddenly ripened in my life are all the incentive I need, and I know now like never before how important it is to practice the Dharma.

Taking joy in our Dharma practice