Officially sanctioned bhikkhunī ordination disappeared from the Theravāda Buddhist tradition centuries ago. The last evidence for the existence of the original Bhikkhunī Sangha in a country following Theravāda Buddhism dates from Sri Lanka in the eleventh century. Beginning in the late 1990s, however, a revival of the bhikkhunī ordination has been underway in the Theravāda world, spearheaded by monks and nuns from Sri Lanka. With the support of a number of learned monks,1 Sri Lankan women have sought to restore the long-vanished order of nuns not only to a place in their nation’s heritage but to the religious life of international Theravāda Buddhism. 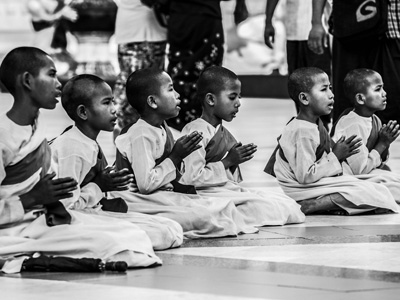 The first ordination in the contemporary revival movement took place at Sarnath, India. (Photo by ALwinDigital)

The first ordination in the contemporary revival movement took place at Sarnath, India, in December 1996, when ten Sri Lankan women were ordained as bhikkhunīs by Sri Lankan monks from the Mahābodhi Society assisted by Korean monks and nuns. This was followed by a grand international ordination at Bodhgaya in February, 1998, conferred on women from many countries. It was held under the auspices of the Taiwan-based Fo Guang Shan organization and was attended by bhikkhus from different Buddhist countries following both the Theravāda and Mahāyāna traditions along with bhikkhunīs from Taiwan. From 1998 on, bhikkhunī ordinations have been held regularly in Sri Lanka, and at present over 500 women on the island have been ordained. But while the ordination of bhikkhunīs has won the backing of large numbers of bhikkhus as well as lay devotees, to date it still has not received official recognition from either the Sri Lankan government or the mahānāyaka theras, the chief prelates of the fraternities of monks. In other Theravāda Buddhist countries, notably Thailand and Myanmar, resistance to a revival of the Bhikkhunī Sangha is still strong. In those countries, the conservative elders regard such a revival as contrary to the Vinaya and even as a threat to the longevity of Buddhism.

In this paper I intend to focus on the legal and moral issues involved in the revival of the Theravāda Bhikkhunī Sangha. My paper will be divided into three parts.

I. The case against the revival of bhikkhunī ordination

While monastic ordination has never been an absolute requirement for spiritual practice and attainment in Buddhism, through the centuries the lifeblood of the Buddhist tradition has flowed through its monasteries and hermitages. Even today, in this age of electronic commerce and high technology, the call to the simple monastic life still inspires many, women as well as men. Yet in most countries that follow the Theravāda tradition women are allowed to enter only upon subordinate forms of renunciant life. The heritage of formally sanctioned monastic ordination prescribed in the ancient canonical texts is denied them.

Conservative Theravādin Vinaya experts posit hurdles at all three stages. I will discuss each in turn.

The first step of entry into the renunciant life, pabbajjā, transforms the woman aspirant from a lay devotee into a sāmaṇerī or novice. The Vinaya Pitaka itself does not explicitly state who is entitled to give pabbajjā to a female aspirant for ordination, but the Theravāda tradition unequivocally understands that it is a bhikkhunī who assumes this role. Of course, in the earliest phase of the Bhikkhunī Sangha, this procedure had to be managed differently. According to the account found in the Cullavagga, the Buddha ordained Mahāpajāpatī Gotamī by giving her eight principles of respect and then allowed bhikkhus to ordain the other women.2 The bhikkhus then gave upasampadā to the five hundred Sakyan women directly. It seems that at this point the distinction between pabbajjā as novice ordination and upasampadā had not yet arisen. But thereafter it became the duty of a bhikkhunī to give pabbajjā to a female aspirant, who would become her pupil, to be trained by her for eventual full ordination.

Once a full-fledged Bhikkhunī Sangha came into being, one never finds in the Pāli Canon or its commentaries an instance of a bhikkhu giving pabbajjā to a woman. But we can still ask whether there is any prohibition against a bhikkhu doing so. Though no Vinaya rule forbids this, conservative Theravādins hold that the pabbajjā always has to be given by a bhikkhunī. They point out that in the texts and commentaries, when a woman asks the Buddha to admit her to the Sangha, the Buddha does not give her pabbajjā himself or send her to any of the senior monks for ordination but always instructs her to go to the bhikkhunīs. Later texts, neither canonical nor commentarial, explicitly state that it is prohibited for a bhikkhu to give pabbajjā to a woman. Thus the Mahāvaṃsa, the “Great Chronicle” of Sri Lankan history, relates the story of the Elder Mahinda’s arrival in Sri Lanka and his conversion of the royal court to the Dhamma.

But the queen Anulā, who had come with five hundred women to greet the elders, attained to the second stage of salvation [once-returning]. And the queen Anulā with her five hundred women said to the king: “We wish to receive the pabbajjā-ordination, your Majesty.” The king said to the elder, “Give them the pabbajjā!” But the elder replied to the king: “It is not allowed (to us), O great king, to bestow the pabbajjā on women. But in Pāṭaliputta there lives a nun, my younger sister, known by the name Samghamittā. She, who is ripe in experience, shall come here bringing with her the southern branch of the great Bodhi-tree of the king of ascetics, O king of men, and (bringing) also bhikkhunīs renowned (for holiness); to this end send a message to the king my father. When this elder-nun is here she will confer the pabbajjā upon these women.”3

While waiting for Sanghamittā to arrive, the queen Anulā, together with many women of the royal harem, accepted the ten precepts and wore ochre robes. That is, they observed the same ten precepts that a sāmanerī observes and wore the robes of a renunciant (probably not cut up into patches), but they had not received any formal ordination; they were the equivalents of the dasasilmātās of present-day Sri Lanka. They left the palace and went to reside in a pleasant convent built by the king in a certain part of the city. It was only after Sanghamittā and the other bhikkhunīs arrived from India that they could take pabbajjā.

The second legal obstacle to a woman’s ordination, according to the conservative Vinaya experts, is imposed by the sixth garudhamma. This rule states that before she can take upasampadā a woman candidate must live as a sikkhamānā, or “probationer,” training in six rules for a period of two years. She receives the status of sikkhamānā through a saṅghakamma, a legal act of the Sangha. Now this act is performed by the Bhikkhunī Sangha, not by the Bhikkhu Sangha,4 and therefore, in the absence of a Bhikkhunī Sangha, a female candidate for ordination has no way to become a sikkhamānā. Without becoming a sikkhamānā, it is said, she will not be able to fulfill the prescribed training (sikkhā) leading to upasampadā. Further, after completing her training in the six rules, the sikkhamānā must obtain an “agreement” (sammati) from the Sangha, an authorization to take upasampadā, and this agreement too is given by a Bhikkhunī Sangha.5 Thus these two steps along the way to upasampadā—namely, (1) the agreement to train in the six rules, and (2) the agreement confirming that the candidate has completed the two years’ training in the six rules—both have to be conferred by a Bhikkhunī Sangha. In the absence of a Theravāda Bhikkhunī Sangha, the Vinaya experts say, a candidate for bhikkhunī ordination cannot pass through these two steps, and without passing through these two steps, she will not be qualified for full ordination.

This requirement for dual-Sangha ordination became integral to the Theravāda tradition’s conception of the bhikkhunī. In the Pāli Vinaya Piṭaka, we encounter a standard description of a bhikkhunī that reads thus:

From the time the Bhikkhunī Sangha reached maturity until its demise, in Theravāda countries the dual-Sangha ordination was regarded as mandatory. We find in the Vinaya Piṭaka occasional mention of an ekato-upasampannā, “one ordained on one side,” and we might suppose this means that some bhikkhunīs continued to be ordained solely by the Bhikkhu Sangha. This, however, would be a misinterpretation of the expression. The expression ekato-upasampannā refers to a woman who has received ordination solely from the Bhikkhunī Sangha but not yet from the Bhikkhu Sangha. It denotes a woman in the intermediate stage between ordinations by the two wings of the “dual-Sangha.” The Pāli Vinaya Piṭaka is scrupulously consistent in restricting the use of the word “bhikkhunī” to those who have fulfilled the dual-Sangha ordination. In the Suttavibhaṅga section of the Vinaya, whenever the text has occasion to gloss the word “bhikkhunī,” it states: “A bhikkhunī is one who has been ordained in the dual-Sangha” (bhikkhunī nāma ubhatosaṅghe upasampannā).

Thus, in the light of the Parivāra’s criteria, the Vinaya legalists argue that when the rules for ordination specify a dual-Sangha upasampadā, and when a bhikkhunī is legally defined as one ordained by a dual-Sangha, if a single Sangha performs the ordination, the assembly is defective, because valid ordination requires the participation of the two assemblies, of bhikkhus and bhikkhunīs. The motion and announcements are also defective, because only one motion and three announcements have been recited, whereas valid ordination requires two procedures each with its own motion and three announcements. Starting from these premises, since a Theravāda Bhikkhunī Sangha no longer exists, the legalists arrive at the inevitable conclusion that there is simply no possibility of reviving the Theravāda Bhikkhunī Sangha. Bhikkhunī ordination will remain out of reach throughout the duration of the present Buddha’s dispensation.

Bhikkhu Bodhi is an American Theravada Buddhist monk, ordained in Sri Lanka and currently teaching in the New York/New Jersey area. He was appointed the second president of the Buddhist Publication Society and has edited and authored several publications grounded in the Theravada Buddhist tradition. (Photo and bio by Wikipedia)
View all posts by Bhikkhu Bodhi →