Featured on Spirituality and Practice. 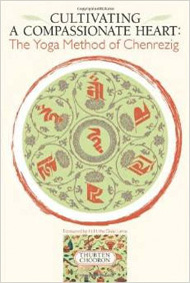 Sometimes, just watching the news creates agitation and anger in our mind. Self-righteous feelings and judgment arise because “those idiots” are doing something we don’t like. Work with that self-righteous, judgmental mind in your meditation. Others may do negative actions, but why do we need to be contemptuously “holier than thou” in our response? Why can’t we cultivate a compassionate response to others’ negativity? After all, they’re confused about what causes happiness and what causes suffering, and they’re under the control of mental afflictions, which harm them. Thinking in this way enables us to have compassion, because we see that others don’t mean harm to us when they act in certain ways. Then we can send light and purify other sentient beings of their negative karma.

Someone once asked Lama Yeshe whether Mao Tse-tung was an evil being. His army killed many people and due to his actions, many people, including the Lama himself, were adversely affected. Lama looked at us and said, “He meant well, dear.” We were waiting for Lama to make a strong political statement, especially since he had to flee Tibet due to Mao’s army, carrying only his tea cup with him, and enter India as a refugee. We were a group of liberal Westerners, ready to scream “injustice” on behalf of oppressed people, but Lama just said, “He meant well, dear.”

Often, people act harmfully but think they’re doing something good. Their minds are overwhelmed by disturbing attitudes and karma. I’m sure we can look at our own past and see things we’ve done and say, “How could I have done that?” Looking back and understanding our own mind, we see that we were overwhelmed by afflictions and karma. We weren’t a horrible person who meant harm. We were just totally confused at that time. Understanding this, we forgive ourselves and, in doing so, become less judgmental and more forgiving of others.

Before or after watching the news, do the Chenrezig meditation and send light out to purify all those sentient beings. Try to figure out which afflictions are motivating them to do what they’re doing, and imagine the light purifying specifically those disturbing attitudes and negative emotions. Think about the kind of karma those people are creating and what kinds of results that karma could bring. Ask yourself, “What did they do in the past to make this behavior habitual so that they’re still doing it now?” Then, send light to them to purify the seeds of past actions that cause this habitual behavior and to cleanse the karma they’re creating now so they don’t have to experience future suffering.