After the September 11, 2001 attacks on the United States, Venerable Thubten Chodron received many emails from Dharma students in Singapore, Kazakhstan, Russia, Israel, and El Salvador. She answered them with the following thoughts:

I’m very touched by how many of you have written from far-away countries to express your sorrow at what has occurred in the USA, inquire about my well-being, and send messages of peace. Thank you so much for your concern.

I am well, though I am grieving for those who have lost their lives and those fire fighters and police who have sacrificed their lives to save others. Although this attack was on the USA, it will have ripple effects on all of us internationally as we struggle to try to understand how other human beings could harm each other in this fashion. 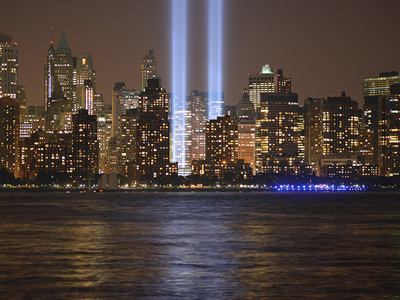 Imagine Chenrezig’s light of compassion and wisdom filling all of us, purifying our minds of all obscurations and bringing us the calm, love, and wisdom to prevent harm and act beneficially.

The last few evenings at Dharma Friendship Foundation, we have come together as a community to bring our Dharma practice and aspirations to bear on this tragedy. We were not there to spout beautiful-sounding Buddhist ideals, but to look in our own hearts in an attempt to deal with what has happened in the country and what is happening within ourselves, and to support each other in this process. After some chanting and silent meditation, I asked people 1) to observe all the emotions they had gone through that day, and 2) to be aware of what their questions are, i.e. "What am I struggling to understand?" We then shared our reflections on these.

People expressed sorrow, confusion, and fear; tears were shed. Many felt the sense of impermanence, insecurity and lack of control that the Dharma talks about, but we do not see in our daily lives when we feel "on top of things."

Some said they were angry but knew retaliation would only worsen the situation. Some were struggling to understand the minds of the terrorists.

Others were wondering how to deal with colleagues and friends who were angry and wanted the government to inflict immediate retribution. Some were wondering how they could ever feel safe or feel that they could protect their children. Many people were afraid that the US government would react strongly causing more death and violence. A teenager said he felt disillusioned, and everyone agreed that things will never be the same.

We all wanted to get a message of peace and compassion out to others. Although people are in shock, only some people in the USA are calling for retaliation. Many are not. When people are frightened and feel powerless, anger and a wish to retaliate arise. We at DFF are clear that, while we grieve and condemn the terrorist attack, as the Buddha said, hatred is not resolved by hatred, but only by love. We want those who do not want our country to make an angry response to know that there are others like them.

One DFFer wrote letters to local Muslim groups offering support to those who had received threatening phone calls. We all signed those last night and sent them off. Another DFFer wrote to President Bush saying that we do not want military retaliation. It, too, was signed by everyone and sent. One person wrote a letter-to-the-editor expressing our wish for peace. We are making a collection to put a full-page ad in a Seattle newspaper with a quote from His Holiness the Dalai Lama and the verse from the Dharmapada mentioned above. We also took down the President’s email address, knowing that the voice of peace must be spoken and heard.

I believe the USA must do some "soul"-searching. Once we have processed our initial reactions, we must ask: Why do others wish to harm us? How have our governmental policies harmed others? How has our country behaved arrogantly to other nations and to the international community as a whole? This will take time and much courage, and I pray Americans are up for it.

We then did some meditation on Chenrezig, the Buddha of Compassion. We visualize Chenrezig where the World Trade Center towers used to be and another Chenrezig on top of the Pentagon. Those Chenrezigs emanate light which flows into us, into those who were killed and their families, into the terrorists and their families, into all people in the country, and into all living beings everywhere. While we recite "om mani padme hum," this light of compassion and wisdom fills all of us, purifying our minds of all obscurations, especially hurt and anger, and bringing us the calm, love, and wisdom to prevent harm and act beneficially. Please join us in our meditation.

Venerable Thubten Chodron gives a commentary on healing anger in the wake of September 11.