At the first Global Awards for Outstanding Contributions of Commended Bhikshunis, presented in November 2016, Venerable Master Jingliang spoke to the assembled bhikshus, bhikshunis, and laypeople.

Continuing with the awards ceremony, we now cordially invite the Honorary Chairperson of the Buddhist Association of the Republic of China, Venerable Master Jingliang, to address us. Since mainland China and Taiwan opened up relations, he has visited mainland China many times and has made many contributions to developing Buddhist ties between the two shores. Everyone, please welcome him with a warm round of applause!

To all the founding masters at this great assembly, Venerable Master Bhikshuni Pu Huei, all senior bhikshunis, Venerable […] from […] Temple [inaudible], and also my fellow senior bhikshus, Abbot of Fo Guang Shan Temple Venerable Xinbao, and all the great laypeople present who support the Buddhadharma, good evening. 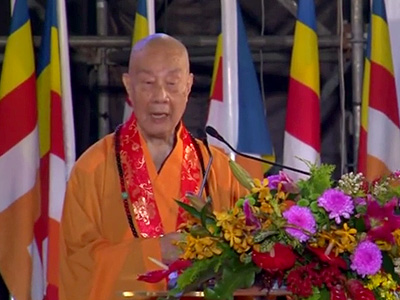 Speaking from the heart, the reason I am attending the celebration of the 20th anniversary of the founding of the Chinese Buddhist Bhikshuni Association today is to extend my congratulations with a heart that wishes to repay gratitude.

From the 38th year of the Republic of China (1949) when I came to Taiwan until today, I have spent 68 years in Taiwan. What I have seen and heard is very clear in my mind. I can say that in Taiwan, I am among those monastics who have considerable influence. In the decades since 1949, bhikshunis have been making great contributions to the flourishing of the Dharma in Taiwan.

Later in 1953, after we gave the going-forth and precepts here, bhikshunis became the majority of monastics. It can be said that today in Taiwan, compared to bhikshus, bhikshunis form two-thirds of the strength of the monastic population.

What I would like to express here is very simple, just a few words. Regarding bhikshunis I can only say one thing about their contributions: the fact that Buddhism in Taiwan has been able to progress and shine with boundless radiance is entirely due to bhikshunis who have been attending to their duties and offering their contribution. For instance, bhikshunis are contented, hardworking, and magnanimous. They cherish others, are dedicated, and sacrifice their own happiness for the Dharma. In organizational meetings, they are neither egotistical nor small-minded. I feel that in each and every group, they have quietly offered their contribution.

A few days ago, I was in Taipei to attend the World Buddhist Sangha Council’s executive committee meeting. It so happened that being very gracious, Venerable Master Liaozhong (the President), asked me to be the chairperson. As I was chairing the meeting, a German abbot, a bhikshu, said something that I found extremely moving. He said that when we look on the globe, we have no idea where Taiwan is. It’s just a small island that we can barely see it. Who would have expected that Buddhism in Taiwan could emanate boundless radiance and illuminate the world? I was very happy to hear this.

Of course, at the meeting it was not appropriate for me to say too much, as I was the chairperson not a speaker. As such, the meeting participants are still not aware that Buddhism in Taiwan has such great fortune today and shines with boundless radiance due to numerous bhikshunis personally stepping forward to quietly offer their contribution, allowing us scholarly bhikshus to expand upon their abilities. Now that I have visited mainland China, I likewise hope that bhikshunis in mainland China will follow the lead of our bhikshunis in Taiwan and also demonstrate their strength. In this way, both shores will share each other’s joy and follow the same course.

I pray that our efforts to propagate the Dharma will flourish, that mainland China and Taiwan can be harmonious and happy. I pray that each and every one of us will thrive, and that the world will be peaceful. Then wouldn’t our human world be a pure land? Whether such a pure land can continue in the future and be brought to greater heights depends on the bhikshunis who are present here before us, whether they can generate the aspiration to receive such an inheritance from the senior bhikshunis who have come before them. I pray they will take heed, further exemplify, and expand upon what the present bhikshunis have done. Then, we will have good fortune: Taiwan will have the greatest energy and enthusiasm, everyone will have peace and joy, and our Dharma propagation efforts will flourish. The merit of this will be inconceivable.

Finally, I would like to wish everyone good health in body and mind. May you be filled with the joy of the Dharma and have a long life. Amituofo!