May 9th was the annual Buddha Day celebration at Coyote Ridge Correctional Center. Coyote Ridge is a medium security prison located in Connell, Washington, about two-and-a-half hours from the Abbey and is the largest prison in the state. There are 2,468 males incarcerated currently.

I arrived at the prison at 8:00 am and was greeted by the lay volunteer of the Buddhist group, Chris. He introduced me to two Zen monks; Thay Kozen and Thay Vinh Minh as well as two other volunteers. We passed through security and walked through a series of locked gates and fences with razor wire. The landscape was concrete without any green plants or trees growing. We arrived at a large room that was in the education wing of the prison. 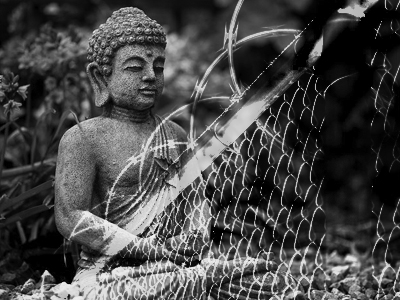 It was beautiful to see the mutual trust and respect between them. (Photo by Stephen Bowler)

Some incarcerated people were setting up an altar and others were setting up chairs in a circle. At 8:45 movement began and about 35 people came into the room. They were open and friendly with Chris and the other volunteers as well as with the chaplain, Eric Askren. It was beautiful to see the mutual trust and respect between them.

Some of the incarcerated people had requested to do the ceremony of formally taking refuge in the Buddha, Dharma, and Sangha and taking lay precepts so I talked about what it means to take refuge and how we train in the precepts once we take them. I told them that they all had buddha nature and could totally transform their minds but they had to quit holding on to negative views of themselves. After the talk, eight people came up to take refuge with the others witnessing. It was very lovely and at the completion of the ceremony the others came up and congratulated them.

Lunch was then served, and one could see this was very special food—not the usual food they get. Everyone was very happy to get nutritious food.

After lunch Thay Kozen led the metta meditation and then a cloth mandala was brought out and the participants filled the image in with colored rice. At the end, the mandala was destroyed to remind everyone of impermanence.

In the afternoon I gave the bodhisattva vows to a person who has been corresponding with the Abbey and studying the bodhisattva vows for at least three years and was well prepared to take them. I was very impressed with the guards who were relaxed, open, and eager to help Buddha Day be successful.

I came away with a deeper conviction that, when a group of people sincerely practice the Dharma, the entire environment is profoundly affected in a very positive way.

The far-reaching practice of fortitude
Living an open-hearted life