It was 6 o’clock in the morning when Venerable Samten, Venerable Yeshe, Anagarika Terri and I set out to the Airway Heights Correction Center to attend their annual Buddhist Festival Day celebration on June 2, 2012.

Airway Heights is a medium-level prison that houses 2,258 men. As we neared the entrance, we met two of the volunteers at the prison, Judi and Rowan. We stepped into the main building, placed our belongings in a locker and handed our I.D.s over to the guard as we signed in. One by one, we passed through the security gate with our shoes off.

After we cleared security, Chaplain Luce escorted us into the prison. We were herded into a small room, and the door slammed behind us and clicked shut. In this narrow space, we signed in again and flashed our visitor badges to a guard sitting behind a glass window. Then a door was unlocked, and we walked into the yard of the prison, down a long walkway to the building that housed the library and the chapel. Along the way, the path was adorned by beautiful flower gardens that the people in this prison tended to lovingly. 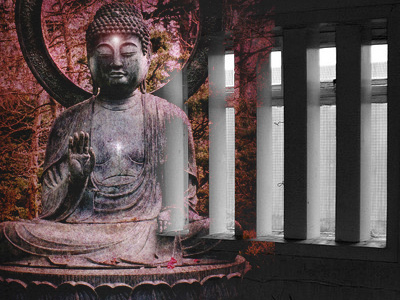 Practicing the Dharma can be a great support to inmates. (Photos by Still Burning and Alice Popkorn)

At the chapel, we were greeted by paintings of Buddhas, as well as an altar with a Buddha statue, offering bowls and incense. There was a table full of Dharma books, and another covered with a white sheet on which a mandala had been drawn. Chairs and cushions were spread out around the room. In about 20 minutes, “movement” would happen, during which the incarcerated people were allowed to travel from one section of the prison to another.

When they arrived at the chapel, their faces lit up with smiles as they put their palms together to greet us. Many approached us and extended their hands to us, expressing their heartfelt gratitude that we had come to attend their once-a-year celebration.

One of the people, Coda, stepped forward to welcome everyone. There were about 25 incarcerated people, many of whom were sitting on blankets and meditating. Coda introduced the theme of the celebration as “Sangha and its meaning.” He asked us to introduce ourselves, and then invited Rowan, a Zen Roshi who had traveled from Missoula, to share on the theme. Rowan spoke about what the Sangha meant to him for a few minutes, then invited the rest of us to share our views. After the Dharma sharing, we all sat in meditation together. The celebration rounded off with a social hour, during which many of the incarcerated people began to work on the mandala, while others socialized with each other and the guests.

I had the opportunity to speak to two of them at length. The first, Tim, shared with me how he had received news last year that he would be in prison for the rest of his life. He was so upset that he had stopped practicing the Dharma, even though he realized that practicing was important for his mind. We talked about accepting, but also staying open to change. Tim had many questions about the lamrim (stages of the path to awakening), especially on how to meditate on the teachings. We had a good discussion on how meditating on the lamrim teachings repeatedly would transform the mind.

Towards the end of the celebration, a young man with long hair came up and asked me how to stop his self-hatred. With tears in his eyes, he said, “I hurt my wife and my family real bad. I cannot forgive myself.” We talked about the pain and damage that self-hatred wreaks on our hearts. He understood how self-hatred blocks our ability to grow our compassion for others and grew very interested in purification practices and in developing bodhicitta.

All too soon, our time together was up. We bowed to one another, hearts open, feeling compassion towards each other.

Responsibility versus obligation
Karma and its effects