How to grow a monastic

How to grow a monastic

Report on the 19th Annual Western Buddhist Monastic Gathering held at City of the Dharma Realm in Sacramento, California from October 21 to 25, 2013. Watch sharing on Youtube.

The annual gathering of Western Buddhist monastics is one of my favorite events of the year. Having attended all but three or four of the nineteen gatherings, I have watched our group expand and coalesce into a vibrant community over the years. It seems to me the Buddha would be very pleased to see his devoted disciples gather with harmony each year, supporting each other in this adventure of living as monastics in modern Western society, where people have little idea who these shaven head, saffron-robed ones are. Of course, we recognize each other, not just because of the robes, but because we see in each other the genuine aspiration to be free from cyclic existence and to benefit others. People who live with such an intention and with ethical conduct are not easy to come by in a world that values money and consumerism.

This year [2013], over forty of us—female and male celibate monastics—gathered at the City of the Dharma Realm, a Chinese Mahayana Nuns’ Monastery in Sacramento, California from October 21 to 25. “Monastic Formation”—an umbrella term that covers the many aspects of monastic training that help to guide and develop all aspects of a human being—was our theme this year.

The first morning, a panel with both elders and juniors shared their personal experiences of training. We discussed: While we have teachers, how do we manage our ignorance, anger, and attachment on a daily basis? How do we accept that our teachers have more faith in our potential and capabilities than we have in ourselves? How do we avoid bringing the teaching down to our level instead of trying to stretch ourselves to fulfill our spiritual aspirations? As one person said, “The Buddhadharma is the only thing stronger than desire.”

The afternoon session was “Training and Being Trained: The View from the Abbess’s Seat” with Rev. Master Meian from Shasta Abbey and Bhikshuni Thubten Chodron from Sravasti Abbey. We discussed in depth how being in a leadership position impels us to train our own minds so that we can respond to everyone with equanimity, compassion, and wisdom. Handling the “antics” of the juniors was another topic of commiseration, and as one of the abbots in the audience commented, “When you become an abbot or abbess and have to work with others, you recognize what you put your own teacher through and immediately call him or her and apologize profusely.”

The entire second day, we were in break-out groups discussing “Exploring Tensions Between Traditional Buddhist Cultures and Contemporary Western Values and Cultures and How to Resolve Those Tensions.” This brought up many fruitful discussions, among them: What is the Role of the internet, iPhones, and other technology in a monastic community? How do we relate to gender inequality in Asian and Western monasteries, and how do we foster gender equality? What is the role of hierarchy in monastic formation and what responsibilities do elders and juniors have for each other? How do we practice the vinaya—monastic discipline—in a culture with different values and etiquette? Have we brought with us into Buddhism the unconscious idea of Original Sin? A “guilt group” was born from this discussion, and many people found it valuable to discuss not only the subtle and not-so-subtle ways we denigrate ourselves and prevent ourselves from growing but also the Buddhist practices that help us overcome these obstacles.

The third day, we did a “Walk to Feed the Hungry” in support of the work of Buddhist Global Relief. Organized by one of the bhikkhunis, all of us walked around the government buildings of downtown Sacramento carrying banners to encourage people to give to help people around the world who lack food and education. This was followed by a picnic in the Capitol Park and talks by those who are directly benefiting others, for example, by teaching farming methods, healthy diets, and so on. On the walk, we talked with each other and with people who approached us and were interested in feeding the hungry.

The afternoon session centered on “The Influence of Judeo-Christian Conditioning on Western Buddhist Training,” a fascinating topic to both the Asians and Westerners at the gathering. That evening, Rev. Heng Sure did a sing-along of Dharma sounds while he played guitar and we asked questions to his monastic puppets who gave hilarious answers.

Outside of the formal sessions, we could join in chanting with the nuns from the City of the Dharma Realm. We meditated together, walked together, and shared many cups of tea one-on-one or in groups where we could explore more deeply what came up in our sessions and personal questions we had. The friendship across traditions was palpable, especially since many of us have gotten to know each other very well throughout the years of the Western Buddhist Monastic Gatherings.

In our being together over these days, we learned from each other, shared experiences from our different perspectives—as junior and as senior; as those in community and those practicing alone; as monks and as nuns. We shared the challenges and beauty we find in our monastic life and supported each other in growing in the Dharma, letting go of afflictions, and cultivating our good qualities and potential. We returned to our monasteries or apartments with increased respect for the Buddha’s teachings and the monastics that hold them and with renewed effort to practice the Buddha’s precious teachings ourselves. 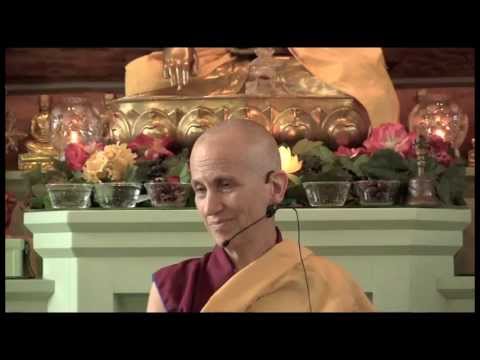 Emptiness does not mean nothingness 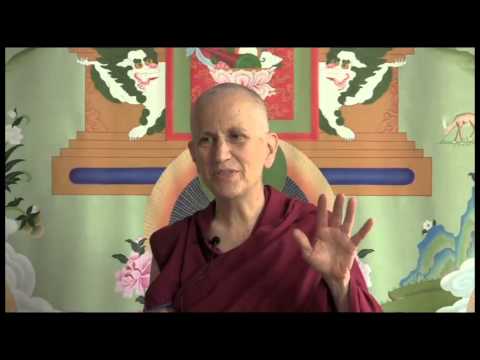