You are here: Home > Practical Buddhism > Prison Dharma > By Incarcerated People > On Addiction > Practising and upholding the precepts
By B. T. on Aug 20, 2011 in On Addiction

A better understanding of the second noble truth

Whoever is overcome by this wretched and sickly craving, his sorrows grow like grass after the rain. — the Buddha

I am a Buddhist practitioner, and I am also an alcoholic. I have seldom heard people address these labels as being related, although I am not suggesting that only addicts suffer due to craving. However, who but an addict would have a better understanding of the second noble truth, in which the Buddha states that the cause of suffering was craving? 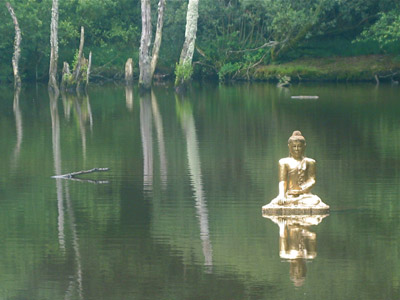 The Buddha said, “Until the craving that lies dormant is rooted out, suffering springs up again and again.” (Photo by Akuppa John Wigham)

A substance abuser’s suffering is blatant. It is also relatively easy to identify the cause of this dissatisfaction. Not only are we linked to our addictions psychologically, but also physically as well. Even after many years of being clean, we may be struck by the urge to use mind-altering drugs or alcohol.

I have been clean and sober for about six and a half years and now have no desire to use drugs or to drink. I regard my sobriety as a spiritual experience. There was no blinding light, no prophetic revelation from the Buddha. Rather, it was a process. By learning the basic principles of Buddhism and trying to practice them in my life, I began to change. There was an upheaval in my character defects. My values changed, and I began to have a new belief system. Vowing to uphold the precepts, I swore to abstain from taking intoxicants. Sounds pretty simple, huh? I just gave my addiction up.

Over the past several years that I have been clean, I have slowly ceased viewing myself as an alcoholic or addict. That is a fragment of my past. I began to identify myself more and more with the label “Buddhist.” It sounds so much more pleasant than “dope fiend” or “falling-down drunk.” Somewhere along the way I decided that I was fixed. “I have no desire to be drunk or high,” I thought. “So obviously I am well now. I will never use again.”

A review of past and recent events has led me to question these statements. It has brought me back to the realization that, in fact, I am an alcoholic. I am a drunk. I am a dope fiend. It’s just that I am not currently practicing those behaviors. The Buddha said, “Until the craving that lies dormant is rooted out, suffering springs up again and again.” My addiction lies dormant. I have to acknowledge that and recognize that all it takes is for me to use one time and the addiction will again be active. If I get just one taste of an intoxicant, it means my return to a nearly constant state of suffering.

What is to be done with my addiction? Can I eradicate this destructive desire from my life? Can I become well through faith? Maybe will power can sustain me? I don’t know. The only answer that I have right now is to search for more answers. What I do know is that this is a serious issue. The collective recidivism rate for prisoners in the USA is high. So many of these people are high or drunk when they make the decisions that lead them back to prison. And they are the lucky ones, aren’t they? Being a Buddhist didn’t stop Dan from shoving a needle into his arm not long after he was released. Taking a vow to abstain from intoxicants didn’t stop him from dying due to the craving from addiction.

So what do I do? I continue to investigate my mind and stay constantly on guard for shortcomings in my thinking process. I seek to correct the thoughts that lead me to engage in destructive behavior and investigate how my feelings often control my thoughts and vice versa. I must be mindful of these things as well as of the consequences that others and I will suffer if I choose to drown my body and mind in drugs and alcohol. I have to have solid recognition that I have a disease, and at the same time, to know that the Three Jewels offer me a remedy.

He who … is ever mindful—it is he who will make an end to craving. — the Buddha