The shop where I worked closed and I’m ashamed to admit that my practice has been off and on during this period. Alas, I don’t take change very well, not as much as I would like to believe I do. It’s kind of ironic that the very nature of things is to change, so why does it affect me so? Hmmm… maybe something to do with clinging, in wanting for things to remain the same so that there is a sense of equilibrium, of stability. But what’s “out there” is not what will keep me stable, will it? I need to make serious effort and commitment and get back up on that proverbial horse again and get focused. I know this in my heart and mind, and I know how important it is that I do this each and very day. I made a vow that I will and I know that I will. 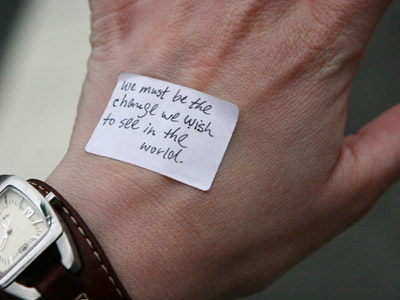 It’s kind of ironic that the very nature of things is to change, so why does it affect me so? (Photo by kris krüg)

I’m sure you’re familiar with imprisoned people doing “routines.” For many people in prison, routines are what keep us busy. Without a routine, life in here or even out there can get a bit chaotic at times. Since the shop closed, I’m in limbo, not knowing where I’ll be assigned. And once I get a new job and learn my new hours, it will be another week or two before I finally establish my routine. Funny isn’t it that in certain respects life seems to be a routine of established activities, from the soccer dad driving his kids to scheduled games to the mother driving her kids to an established after-school activity. Even in here there are scheduled activities from recreation to the use of the library. Our eating activities are firmly established. But when one of those activities has been suddenly cancelled, watch out! Sometimes you just have to grin and laugh when you see everyone’s reaction when an activity has been cancelled or rescheduled. The very atmosphere, the mood of every individual is suddenly evident in their body language and in the very unwholesome ways they express themselves. Yes, I too am guilty of some of these forms of expression, but I’m working on it. That’s why we call it practice, isn’t it?

Then there’s the big change that happens when we leave this place and try to re-establish our lives on the outside. As you probably know already with your past experiences with those on parole, it’s one thing to leave prison and another thing to stay out permanently. I’ve seen many come back for the oddest of reasons. They always manage to find fault in everyone else for failing except themselves. One guy in particular actually wanted to pick a fight with me because I was bold enough to confront him about his own failings. For him it was everyone else’s fault except his own. Mind you, he’s already been back twice! Now he is scheduled to be released again in less than a month.

There is another young man who has been out and back in and is now going to be released again. So I am going to have a long talk with him and point out that whatever happens, whether he succeeds or fails, it all has to do with the choices he makes. When he got released last time, he began hanging out with the wrong kind of people. I will remind him that he needs to grow up and leave those friends behind, friends who will only bring him into difficulties and into unwholesome states of mind. I know he means well, but he has a tendency to forget what’s really important in this life. It remains to be seen whether or not he will heed my counsel and hopefully yours. It also remains to be seen whether or not I heed my own counsel once I’m back out there. I’m not immune to unwholesome states of mind and so I need to be just as vigilant, yes?

Right now I can honestly say that I feel I’m up to the task but I know that once I’m out there, it will be a different thing because I will have to work to put food in my belly, clothes on my back, and have a home to live in. I know it’s going to be tough for a while. But if I’m persistent and approach things in moderation, I should handle it well. I know in the years ahead there will be many obstacles that I will have to overcome to make my plans reality. There are times when I even doubt my own potential, my ability to make the Dharma practice real for me. But when I actually do my practice, when I study or sit in meditation, I know that I’m not just going through the motions, a monkey-see- monkey-do way of approaching the path. I don’t do my practice because you tell me to do it. I do it because I know I have to. It is the only way that the whole world makes any sense to me.

Even when my practice gets lax (when I get lazy), there is this persistent gnawing in my mind, a reminder asking, “Why am I wasting my life in idly pursuing what is unnecessary, what is unwholesome, what leads to bondage?” I’m so grateful for these reminders because it teaches me that I have so much more to appreciate and learn. It humbles me and makes me realize that even though I’ve been at this practice for thirteen or fourteen years, I still have a long road ahead of me. More importantly, it makes me realize and affirm my willingness to take this journey towards liberation even if I have to drag myself kicking and screaming towards that end.

Anger and selflessness
Practising and upholding the precepts