Notes from a long-term retreat

From March 2000 to June 2003, I undertook a three-year, three-month (and three-day!) deity retreat, a traditional practice in Tibetan Buddhism. Five of us engaged in this retreat, although we lived and practiced individually and only met every few months for group practice, which we did in verbal silence, although there was a fair amount of note writing and made-up sign language on these occasions! Two of the retreatants were ordained, and three were lay people at the time (including myself).

Near the end of the retreat, we decided to meet to discuss our experiences and compile a three-year retreat manual. When we were preparing for the retreat, we referred to some journal and traditional retreat manuals that primarily discussed the rituals and logistics involved with undertaking such a retreat. However, we really had no information and no idea what to expect in terms of the spiritual, emotional, and psychological transformations we were sure were going to manifest for us and the optimal conditions to help bring these about. Thus after the retreat, we hoped that by compiling our thoughts, future long-term meditators would be able to benefit from our experience. 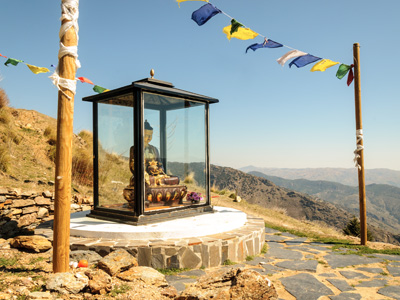 What was most conducive to deep meditation and serious contemplation was in most respects exactly in accordance with the monastic vows. (Photo by DPC)

During the course of these discussions, it became clear that what we had discovered through trial and error to be the most conducive to deep meditation and serious contemplation was in most respects exactly in accordance with the monastic vows. For example, we found that having a few changes of simple, comfortable clothing and a simple hairstyle (for those of us who still had hair!) and dispensing with adornment and even a mirror eliminated the distraction of focusing on one’s appearance. Three heavy meals a day didn’t work—two light meals were best, eaten early in the day, as eating a substantial meal in the evening led to a groggy, unclear evening meditation, as well as sluggish sleep and reluctant rising the next day.

Listening to music didn’t work—the songs would repeat endlessly in one’s head during meditation; and one plaintive love song by a female vocalist (Sarah McLaughlin was the worst!) could easily lead to endless obsessive ruminations about old high school boyfriends (“I wonder where he is now? If I did a search on Google, could I find him?”). Even though we didn’t have access to TV or movies, we could only imagine the effects would be similar, if not worse. Of course, strict celibacy was imperative, and sexual fantasies and daydreams were just frustrating and pointless.

When we did meet, we took great care to make our interactions harmonious, as any harsh interactions or misunderstandings led to feelings of either irritation or remorse (or often both) that would linger and disturb one’s meditation for days, even weeks. We also found that too much “conversation” and note-writing about mundane, non-spiritual subjects led to restlessness, a marked dissipation of energy, and even a physical feeling of bloatedness, similar to the aftermath of overindulging in junk food or sweets! Idle chatter was also out.

Simplicity of lifestyle, elimination of distractions, harmony of relationship. Sound familiar? It seemed to me, in reflecting on what we’d discovered to be conducive for contemplative practice, that these actions of body, speech, and mind met the vinaya—the monastic discipline—and meshed perfectly. Through trial and error and our attempt to analyze the most effective conditions for retreat and realization, we had discovered the system designed by the Buddha more than 2,600 years ago to accomplish exactly the same thing. About nine months before we began this process of discussing our retreat experiences, I had decided to get ordained, and this discovery just strengthened my resolve, as I gained a fresh appreciation for the perfect container that living in ordination creates for awakening.