Sharing the Dharma with incarcerated people

This past Valentine’s Day, Venerable Thubten Chodron and I drove to Salem, Oregon, walked past a huge gaggle of grey geese on the prison lawn and entered the Oregon State Penitentiary (OSP) for men. OSP houses those convicted of felonies. In the small visiting room, we met Randi from the Dharma Rain Zen Center in Portland. Randi and three Dharma friends of hers have been teaching Buddhism at OSP for a number of years. Venerable had a box of Valentine’s chocolates tucked under her arm, a gift to her from another Dharma group. She was hoping to bring the men a treat. However, we were not allowed to take them inside and left them in the visiting room for the staff and families who come to connect with their brothers, husbands, fathers, sons.

The Catholic chaplain, a Jesuit priest, escorted us to the chapel. There, we met the 12 men who had come to hear Venerable’s teachings. What I remember most clearly is the openness, warmth and strength of Venerable’s manner and the curiosity and wide-ranging discussion by the incarcerated people. Several of the men had been coming to the group for a while—others were brand new to Buddhism. One of them revealed he will be at OSP for the rest of his life.

One young man, who I can only describe as arriving inside a grey cloud of isolation, told us that he had been in OSP already for nine years. He appeared to be about 28 years old. He said he had learned to let nothing touch him. He wondered about this survival stance and the Buddhist idea of non-attachment. Were they similar? Venerable talked with him about perceptions: how we can mistake a rope for a snake and act on that wrong view. She pointed out that non-attachment is not based on not caring. Leaning into the group, he began to share how difficult it has been for him to keep a clear mind in the prison after so long.

All the men reflected the tremendous struggle they have “keeping it together” in a dark, depressing, often violent atmosphere. Venerable, talking about compassion, related the story of a Tibetan monk who had been imprisoned and tortured by the Chinese. After he had escaped, the Dalai Lama asked him what had most frightened him during that difficult time. He replied that he was afraid of losing his compassion for the guards who tortured him. Several of the men had that “light bulb over the head—aha look”. They showed a lot of respect and kindness toward all of us and maybe more importantly, toward one another.

As we left, an incarcerated person sweeping the floor in the visiting room held up a half-eaten chocolate from the heart-shaped box we had left there earlier. “Thank you,” he said, and smiled broadly at us before going back to his work. This trip with Venerable gave me the opportunity to see the great intelligence and potential of these men in prison. It left me with gratitude for my freedoms and thinking about prisons, OSP and samsara and hoping for total liberation for all of us. 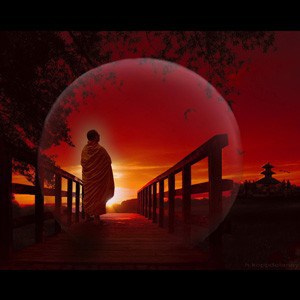