A kindergarten teacher has decided to let her class play a game. The teacher told each child in the class to bring along a plastic bag containing a few potatoes. Each potato will be given a name of a person that the child hates, so the number of potatoes that a child will put in his/her plastic bag will depend on the number of people he/she hates.

So when the day came, every child brought some potatoes with the name of the people he/she hated. Some had two potatoes, some three, while some had as many as five potatoes.

The teacher then told the children to carry the potatoes in the plastic bag with them wherever they go (even to the toilet) for one week. 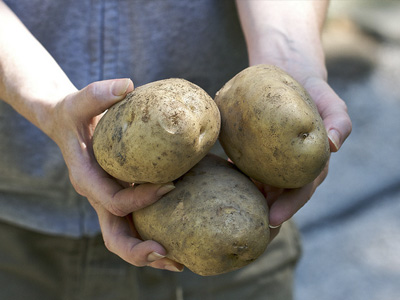 Throw away hatred for anyone from your heart. (Photo by Susy Morris)

Day after day passed by, and the children started to complain due to the unpleasant smell let out by the rotten potatoes. Besides, those having five potatoes also had to carry heavier bags. After one week, the children were relieved because the game had finally ended.

The teacher asked: "How did you feel while carrying the potatoes with you for one week?" The children let out their frustrations and started complaining of the trouble that they had to go through having to carry the heavy and smelly potatoes wherever they go.

Then the teacher told them the hidden meaning behind the game. The teacher said: "This is exactly the situation when you carry your hatred for somebody inside your heart. The stench of hatred will contaminate your heart and you will carry it with you wherever you go. If you cannot tolerate the smell of rotten potatoes for just one week, can you imagine what is it like to have the stench of hatred in your heart for your lifetime?"

Moral of the story:

Throw away hatred for anyone from your heart so that you will not carry sins for a lifetime. Forgiving others is the best attitude to take!