Report on the 2009 International Conference for Buddhist Sangha Education

How do you celebrate the birthday of an esteemed Dharma teacher? In this case, the disciples of Venerable Master Bhikshuni Wu Yin organized a two-day international conference on monastic education followed by a two-day temple tour. Organized by the Gaya Foundation and Lungshan Temple and held in Taipei, Taiwan, May 30-31, 2009, the conference attracted 400 people. They attended the presentations of nineteen speakers from eight countries, each presentation followed by comments from a respondent and questions from the audience. Some speakers were bhikshunis (fully ordained Buddhist nuns), others were university professors. Topics ranged from the history of Buddhist religious women in Taiwan to the current educational programs offered in Buddhist institutes around Taiwan. They also addressed Buddhist nuns’ education in Vietnam, Korea, Malaysia, Taiwan and the Himalayan regions of India as well as the education of Tibetan nuns in India, Theravada nuns, and Western Buddhist nuns.

In the welcoming talk, Mr. Wang Jin Ping, the president of the Legislative Yuan of the Republic of China, noted

The Sangha plays an important and indispensable role in every age. The Buddhism in Taiwan, due to the hard work of all of you (nuns) for the past few decades, it has today’s marvelous results … all the Buddhist women of the world, with their spirit of wisdom and compassion inherited from the Buddha, devote themselves to educate and train Buddhist talents.

How astounding for me, an American who never hears Buddhism mentioned by her government leaders, to hear Buddhism and its followers being openly appreciated by a respected elected government official!

Venerable Master Wu Yin commented in her keynote address, “Buddhism is the education of awakening,” and then noted two major defects in contemporary monastic education:

The second day of the conference began with a presentation by Bhikkhu Bodhi, which he had taped the previous day in USA and put on the web for us to watch. An American monk in the Theravada tradition, he spoke on “Bhikkhuni Education Today: Seeing Challenges as Opportunities.” He began by outlining the purpose of traditional Buddhist monastic education: to know and understand the Buddha’s teachings, to transform our character and behavior, to develop wisdom in order to know the real nature, and to teach and guide others. Since the sangha now exists in society that differs from that at the Buddha’s time, academic knowledge gained through higher education is also needed. The purpose of academic education in Buddhism is to transmit information in an objective manner about the cultural, literary, and historical settings in which Buddhism has existed, to sharpen our critical thinking, and to differentiate the essence of the Dharma from the cultural forms it assumes. While it is unwise to focus solely on academic knowledge of Buddhism, it is equally unwise to insist that the sangha has only a traditional education.

By combining the academic approach with the traditional approach, we can have the best of both. The practice-oriented traditional approach will fulfill our spiritual needs while the academic approach will enable us to learn about other Buddhist teachings and to engage in dialogue with scientists, psychologists, sociologists, bio-ethicists, and other intellectuals. The sangha will also gain the skills to be leaders in a dressing the dangers of war, poverty, ethnic conflict, and global warming.

He concluded by mentioning the challenges and opportunities related specifically to bhikkhunis: transitioning to a post-patriarchal culture and taking on new, more prominent roles as educated female monastics.

The two days of the conference were packed with presentations and interesting discussions. Many nunneries in Taiwan have Buddhist institutes where the sramanerikas and bhikshunis are educated for about five years. Since 2004, the Taiwanese government has accepted the degrees given at many of these Buddhist institutes as comparable to university degrees, which has expanded the possibility of what the nuns can do to help others after their studies. We heard about the educational programs at Foguangshan, Dharma Drum Mountain, and Luminary Buddhist Institutes. All of these organizations began in the late 70s and have since grown to have hundreds of bhikshunis, and except for Luminary Temple, the other two also have bhikshus.

In Taiwan at least 75 percent of the sangha is female. The nuns are well educated and capable, and they actively serve society by teaching the Dharma, counseling, doing welfare work, operating Buddhist radio and TV stations, and so on. As a result they are well respected by society. One lay man commented to me that while in formal monastic situations the nuns walk or sit behind the monks, in the eyes of the laypeople, they are equal. While a handful of Taiwanese bhikshunis are outspoken about gender issues, most are not. In fact, it was the male professors at the conference who told the nuns they should include women’s studies in their curriculum!

For me, being amidst so many bhikshunis was an inspiring experience. One day Venerable Master Wu Yin invited some of us out for a meal. Imagine seeing fifty bhikshunis going up the subway escalator and walking down the streets of Taipei!

Some common themes emerged from several of the conference presentations. Perhaps the most prominent was how do monastics in the modern age balance being educated in the Dharma and the vinaya, putting the teachings into practice through meditation, and meeting the needs of society through teaching, counseling, and providing welfare services? Since sentient beings have a variety of dispositions and interests, how can Buddhist organizations meet their diverse educational needs? What will attract the younger generation to become monastics and what are their unique educational needs? Discussing these is sues together during the presentations as well as during the break times was a first step in creatively brainstorming answers to these questions.

The lay volunteers at the conference were wonderful. They were smiling, joyful, and attentive to whatever was needed by the participants. I thanked some of the volunteers and commented on how happy they were while working so hard, and they responded that they considered it an honor to serve the participants and a privilege to be with the Bhikshuni Sangha.

After the conference, the organizers kindly invited the foreign bhikshunis for a two-day temple tour. We began by visiting Dharma Drum Mountain and Tzu-Chi Culture and Education Center. Continuing on to Chia-Yi, we were warmly welcomed at An-Huei Buddhist Center by lay people lining the road, singing and clapping their hands. I was asked to give a short Dharma talk to the 400 participants of the repentance ceremony that was being held. We spent the night at Hsiang-Guang Temple, where we were taken on a tour of the library and institute campus. Venerable Bongak, the Dean and Professor at Joong Ang Sangha University in Korea, and I both gave Dharma talks. Venerable Bongak used her life story as a teaching to encourage us to persevere in our practice no matter what obstacles we face, and I spoke about the interference self-centeredness causes in our Dharma practice and how to eliminate it by contemplating the kindness of others. Then each of the visiting bhikshunis offered words of advice to the students at the institute. To conclude, Venerable Master Wu Yin gave a Dharma talk which had us riveted. In a frank and direct way she asked us, “What do you want as bhikshunis?” and “What is holding you back?” and encouraged us to actualize our Dharma aspirations.

After lunch we headed for Yang-Huei Buddhist Center where were again warmly welcomed and given a tour of this city center which has won several awards for its innovative architecture. The night was spent at Hsiang Guang Shan Temple, a lovely rural hermitage near Taoyuan. The following morning the nuns there took us on a tour of their herb and vegetable gardens as we soaked up the tranquil atmosphere. And then, the winds of karma took us again in our different directions, taking with us all we had learned and shared together so that we can give it to those we encounter. 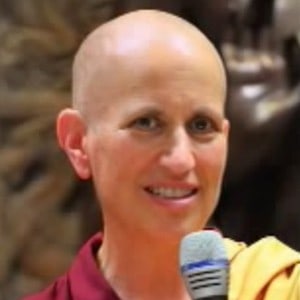 Karma and compassion: Part 2 of 2 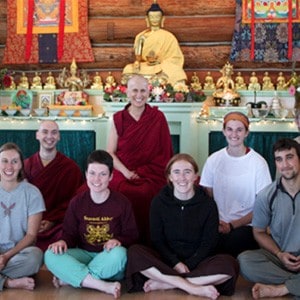