Although there has previously been discussion regarding bhikshuni [ordination], no decision has been reached. However, we need to bring this to a conclusion. We Tibetans alone can’t decide this. Rather, it should be decided in collaboration with Buddhists from all over the world. Speaking in general terms, were the Buddha to come to this 21st century world, I feel that most likely, seeing the actual situation in the world now, he might change the rules somewhat.

Tibetans are not solely responsible for the Buddhist tradition, but amongst those who are responsible, we have an important role. In general, in Thailand, Sri Lanka, Burma, Korea, Japan, and China, there are many “upholders of the vinaya” (bhikshus), and vast numbers of ordained persons; there are nuns and also there are also bhikshunis. Hence, all of these come within the sphere of those who are important in any decision that is taken. We Tibetans alone cannot decide this. 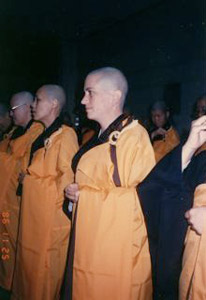 Venerable Chodron at her bhikshuni ordination in Taiwan, 1986. (Photo by Sravasti Abbey.)

However, now, from our Tibetan side we need to plan for when there is an international gathering to discuss this matter, so that we are able to present and explain in complete form whatever discussions and research we have undertaken. Thus, we need to bring our research to a conclusion and have a clear presentation to make, and then we should make connections with all corners of the Buddhist world. If we are able to do this, I think it will be very good.

Then, regarding what we can do ourselves, many of our nunneries have set up programs of advanced levels of education. Those studies are underway, and well-educated nuns are coming up. We had discussion some years ago that if nuns have studied two, three or however many of the [five] main texts, then if they take the debate exam on those texts, accordingly, they need to receive a geshe-ma degree. It was discussed that if there can be gelong-ma (bhikshuni), then there can also be geshe-ma.

For this, there needs to be discussion with the Department of Religion and it needs to be settled with a written document. This applies not just to we Tibetans, there are also many nunneries from Ladakh in the west to Arunachal Pradesh in the east.

In many countries of the world, not just within Buddhism, women have great faith in religion. For example, if we look at the Christian church, the majority of those who visit the churches are women. Regarding Muslims, I can’t say. But in any case, it seems that within the Buddhist countries in the Himalayan region, it is women who have greater faith in their religion. Hence nunneries become very important and accordingly, studies should be of high quality and if, gradually, the lineage of bhikshuni ordination can be introduced it would be good.