At the time he wrote this, B. T. had been living in “The Hole,” or Administrative Segregation, i.e. solitary confinement. He was waiting to attend a course for gang members for which there is a long list. Interestingly, he had dropped out of the gang, at the risk of his life, before he was put in Ad Seg for being in a gang. Upon his transfer to a new prison, he wrote this about the journey from Amarillo across Texas.

I did not know in advance that I would be transferred to this unit. I came by bus, and it’s a good thing too. They would have had a time trying to get me on a plane because I’m afraid of heights! 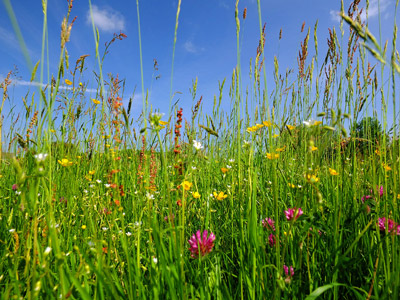 It was really nice to see the grass and the sky. (Photo by Steven Feather)

It was good to see the landscape. There is a lot of pretty scenery in West Texas and the Panhandle. It was also neat to see people, automobiles, and such when we passed through towns. So much of what I saw seemed alien to me. We stopped at a convenience store so the guards could take a break a couple of times. At one of them I saw gas pumps that took credit cards. It all looked computerized. I’ve never seen anything like that before. I wouldn’t even know how to pump gas in a car now. Everything seems to have changed so much.

It was really nice to see the grass and the sky. I don’t see that here and really miss it. We have windows in our cells on this unit—in Amarillo we didn’t—but they are frosted over so that we cannot see out. At least it lets in the daylight.

I received the latest Dharma Dispatch (the newsletter DFF sends to incarcerated people) and saw the pictures of the abbey covered in snow. It looks very pretty and peaceful there. We got our first snow of the year last night. I can’t see it, but that’s what they said on the news.

We are on unit lockdown at the moment (Lockdown means no one can leave their cells). Those that have been here a while say it will only last a week or so. That is good compared to the 3 to 3.5 weeks we stayed down in Amarillo.

I don’t know what happened with my parole hearing yet, though I don’t look forward to a good answer. My mom called them a couple of weeks ago and they have not given my case a vote yet. I’m not real sure how the process works. I am only interviewed about what address I would go to and where I might work, etc. I don’t get to attend the actual hearing. Matter of fact, no one does. Texas has a closed parole board. They don’t allow family members or anyone to attend to speak on my behalf. They are only allowed to write letters of support.

Thank you for the books you sent. I especially like the Dharmapada. There is a library here. We can get three books a week, but it is hit and miss about what they will bring. We don’t have a catalogue or list of books to choose from. We just request a topic and they bring us something that is similar. It is a good deal though.

I can’t receive the meditation tapes that you want to send. I have to wait until I am back in general population before I can try to get anything like that. I wish I could. I wish that I could hear some teachings.

Many incarcerated people from all over the United States correspond with Venerable Chodron. They offer great insights into how they can be of benefit to themselves and others in even the most difficult of situations.
View all posts by Incarcerated people →
Wheel of Sharp Weapons: Verses 56-59
Wheel of Sharp Weapons: Verses 60-63