During his time in prison C. M. became a Buddhist and now does a daily meditation practice. Having completed his prison sentence of many years and participated in several sex offender treatment programs, C. M. is being held under civil commitment due to government fear that he will re-offend. That is, he is being imprisoned beyond the time of his sentence although he has not committed a new crime. He said that this is a more political piece, compared to his usual writing. “I do this every once in a while when I feel a certain level of frustration over my environment or when I observe an obvious injustice,” he explained.

The Queen said: ‘Here is the King’s messenger: He is in prison now being punished and the trial does not begin until next Wednesday, and of course the crime comes last of all.’

‘But suppose he never commits the crime?’ asked Alice.

‘That would be all the better, wouldn’t it,’ the Queen responded.

‘You are wrong,’ said the Queen. ‘Were you ever punished?’

‘Only for faults,’ said Alice.

‘And you were all the better for it I know,’ the Queen said triumphantly.

‘Yes, but I had done the things I was punished for,’ said Alice.

‘But if you hadn’t done them,’ the Queen said, ‘that would have been better still, better, Better, BETTER!’

Her voice went higher with each ‘better’ until it got to quite a squeak.

Alice thought, ‘There is a mistake somewhere.’ 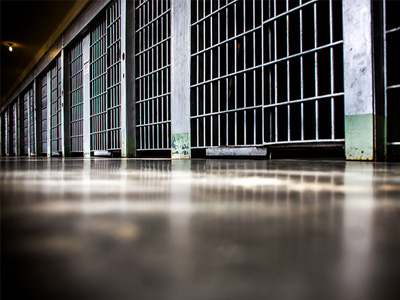 The result is a new form of prison utterly devoid of any of the rights that all prisoners today regard as sacrosanct. (Photo by Thomas Hawk)

Does this passage sound familiar to you? It should, the above quote is an excerpt from Lewis Carroll’s book, Through the Looking Glass. It may come as a surprise to those who believe that our laws are just and that our judicial system is the foundation upon which our democracy stands, to discover that the U.S. Supreme Court actually agreed with the Queen. In their 1997 ruling in (Kansas v. Hendricks), the justices determined that the indefinite detention of a convicted sex offender, upon the completion of his or her prison sentence, is constitutionally justified. Their ruling is based on the same philosophy as that which was offered by the Queen. This is best summed up by Justice’s assertion that certain “professionals” now have the uncanny ability to accurately predict future criminal activity well enough to justify indefinite confinement of anyone who they deem as dangerous. The result is a new form of prison utterly devoid of any of the rights that all incarcerated people today regard as sacrosanct.

This argument is made by the Sophist Thrasymachus in Plato’s Republic:

I affirm that the just is nothing else than the advantage of the stronger.

Sex offenders are now the most disenfranchised minority in the nation with virtually no voice in government and some say we deserve none. If our lives are discarded so easily, it would not take any stretch of the imagination to assume that society cares little about the method or means people are being incarcerated today. As long as the public is convinced that indefinite detention is the solution to sex offenses, this form of internment will continue unabated. Judicial procedures will continue to be streamlined for expedience and constitutional rights will be circumvented to accommodate the public’s appetite for revenge.

Who would endorse such an ominous prescription for totalitarianism? Do we as a society and as the leading democracy in the world want to endorse this methodology in our governing? By all appearances we do, and this too shall have its own consequences as more and more offences qualify for inclusion of indefinite confinement as an alternative to other judicial sanctions. With this mentality the ultimate result will be the loss of our standing in the world as the bastion of democracy.

The question we as a society should be asking is: “How far down this rabbit hole are we willing to go?” The future of our nation rests on the answer to that question. Perhaps Alice had it right; “There is a mistake somewhere.”

Steadfastness and self-confidence
Being present