A turnaround in Mundgod

We are used to Tibetan monks teaching the Dharma to Westerners in the USA, Europe, and Australia. But imagine a Western nun teaching the Dharma in English to Tibetans in India! I was, by chance (by karma?), involved in just such an experience when I visited Mundgod last October. In South India, Mundgod is home to Gaden and Drepung Monastic Universities, both of which are filled with highly accomplished and realized teachers. How then did I find myself giving a Dharma talk to 130-150 Tibetans? 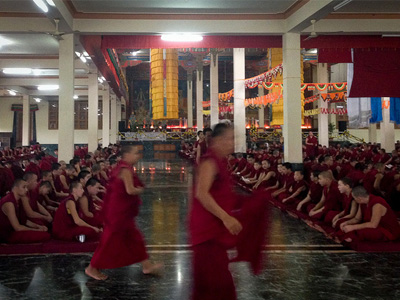 Contrary to many Westerners’ (and Hollywood’s) idealistic visions of Tibetan society, the average Tibetan knows little about the Dharma, aside from rituals such as setting up an altar and reciting a few prayers daily. Tibetans learn some basic Buddhist ideas and values from their parents, but most do not study the Dharma in earnest. First, like the average person in the West, their lives are focused on making a living. Second, most Dharma texts are in literary Tibetan, replete with technical vocabulary that is foreign to the colloquial language spoken daily. Lay Tibetans may attend initiations offered by a high lama in order to receive a blessing, but attendance is much lower when that same lama gives public teachings on lamrim or thought transformation. Until now, the monks in the monasteries in India have not taught classes for the lay Tibetans in the area, nor have the latter asked them to. In addition, although monks lead prayers for a few minutes every day at the Tibetan schools in India, the children do not have classes in which they systematically learn the Dharma and its practical applications in daily life.

Venerable Tenzin Wangchuk, Venerable Zong Rinpoche’s attendant, is an old friend of mine. Progressive and broad-minded, he is concerned about this state of affairs, and tries to encourage young Tibetans in India to learn the Dharma. To this end, he spoke with the principal and director of the Central School for Tibetans, an Indian-run school in Mundgod in which the children study many subjects in English, to see if they were receptive to the idea of an American nun giving a talk to the students. They were and thus he asked me if I would do it. At first I hesitated, for it seemed preposterous that I give a talk when Mundgod is filled with much more qualified teachers than I. But Tenzin persuaded me that the children would be receptive to hearing the Dharma from a “modern American” who spoke in simple language and gave daily life examples.

The teenagers from classes 10 to 12 were seated on the concrete open-air meeting area while I sat on a chair in front. For about 45 minutes I spoke about the applicability of the Buddha’s teachings in our lives: methods to work with anger, to overcome shyness, to develop self-confidence, and to get along better with parents and friends. They listened attentively, and after they realized that it was okay, they loosened up and laughed at my jokes. The session was then opened for questions, which they wrote down. Slips of paper flooded forward from the usually shy youngsters, filled with thoughtful questions that demonstrated their sincere interest. How did I go from a religion that believed in God to one that didn’t? What did my parents say when I did not think as they did? Where are the hell realms—from a scientific viewpoint, isn’t it hard to accept their existence? How did the universe begin? Is Buddhism compatible with science? What does it mean to have faith? What does it mean to be a Buddhist—if we recite Om Mane Padme Hum but don’t understand its meaning, what use is it? How do we deal with inner turmoil, depression, and confusion? What is a Buddha?

When time came to close, all of us were happy. Even the school’s director, who had been serious before, was smiling. But for days afterwards, I shook my head in amazement: how did this unique situation come about? I was extremely grateful, for this was my offering to His Holiness the Dalai Lama. After all the teachings he has compassionately given me and other Westerners, if I could repay that kindness in just a small way by teaching his people, I was delighted. 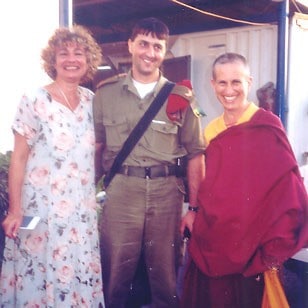 In the Holy Land, Israel and Palestine

Glimpse of the Gaza Strip