A while ago I wrote to Sravasti Abbey and asked for advice regarding jury duty. Then I found the video by Venerable Chodron which helped greatly.

A few months ago I had to choose a week—that is how they do it here—so this was the week I chose to do jury duty. I knew that I would be dismissed in voir dire, and I was.

It was an armed robbery charge. This young kid, about 18, you can see is dirt poor, and you can see too that if something doesn’t change, he’s in for a heap more suffering. His shoulders hunched up so tight that they almost touched his ears. He kept giving the court guards dirty looks. I thought about my own children and wished I could have grabbed him and hugged him tight; he looked like no one had ever hugged him.

Had they kept me longer I probably would have cried sooner or later. It was just heartbreaking. The public defender looked worn out, though he was probably doing his best. The district attorney was laughing and joking with the jury, like she was at a party.

I know those were my impressions, my perceptions and view about what was going on. She also just wanted to be happy and not suffer. I guess I had too many expectations; it just all seemed so strange. A young person’s future was in their hands. 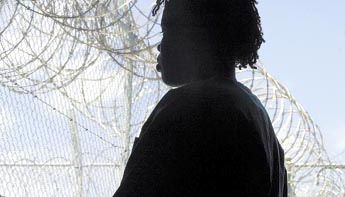 Kids like this are stuck between a rock and a hard place, with all their negative seeds being watered. (Photo by publik16)

I sat there and thought, what chance does this young man stand? There is no rehab in prison; it is there to punish. There is no help on the street; they are cutting back funds to this and that, but keeping the tax cuts for the rich folks. You can see that kids like this are stuck between a rock and a hard place, with all their negative seeds being watered.

I am not saying that if he did what they say he did, it is okay. It is not. But it is just so awfully sad, I see no positive anywhere.

Then looking at him, I thought about his buddha nature, about him becoming a buddha one day.

In the end I am exhausted but happy that I was there, even if it was just for a while, because in the end I was mindful enough to drop all my sad feelings and thoughts, and just breathe. I did tonglen (taking-and-giving meditation) for him.

Maybe that is why I was there, maybe to help create a cause for his positive seeds to ripen. We all created the causes to be in that room together sometime in the past. Somewhere he probably helped me.

May we all benefit by the prayers and practice I silently did, may he and all of us soon be free from suffering and all its causes.