You are here: Home > Practical Buddhism > Prison Dharma > By Incarcerated People > On Attachment > Prison, life, impermanence
By M. P. on Jun 18, 2011 in On Attachment

Attending prison these last 10 years has allowed me to learn many things. Realizations that I only had glimpses of before being incarcerated, but only occasionally taking the time to actually be present in, can be thoroughly explored and realized, if one so chooses. It is a great opportunity.

People’s notions of our country’s prisons may or may not be accurate. Although I had experienced what I considered tough times before, they were really nothing compared to my current experience. And living in a U.S. prison now is nothing compared to the time I spent in prison in a third-world county. No one really could have an understanding of that unless he or she actually spent time in one. Our prisons here in the United States are nice compared to those. 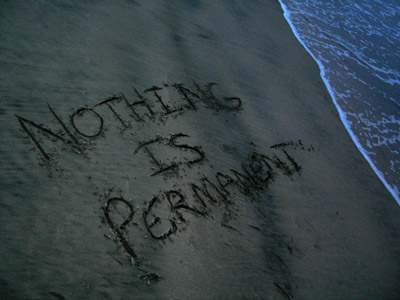 Realizations of impermanence were fully understood for the first time. (Photo by Licorice Medusa)

I had the opportunity to spend almost two years in solitary confinement, where I had nothing at all. I couldn’t even leave for meals; they were brought to my cell. If I was lucky, I could receive books and magazines from the librarian once in a while, when she or he came around. Other than a jumpsuit and a few toiletry items, that was it. I was locked in the small cell for 24 hours a day.

In the very beginning it was great, because I had just come from a third-world prison, where the small cell contained 12 people, with only two bunks. We were locked up 24 hours a day, it was very loud and extremely hot and humid, and the guards would shoot inmates through the bars. This setting allowed my to practice real patience, loving-kindness, and compassion.

After about a month in solitary the walls began to close in. There are studies that conclude the maximum time that one should spend in solitary is about 90 days before it can start to have many adverse affects on a person. I could feel some of those effects starting to happen within myself. For example, my hearing became acutely sensitive and I was very frustrated by not being able to move about outside of the cell. At least in the third-world prison there were many different people I could converse with, which helped the time pass quickly. Now I was totally alone.

At first I went through what I think is probably all of my emotions. Then I started to settle down. I am lucky to come from a business background and also had many years of martial arts practice, so I used these tools to focus on what I believed needed to be done. Of course I didn’t think I would be spending so much time in solitary.

Because of this situation I decided to focus totally on the Dharma and got down to meditating, sometimes upwards of six to eight hours a day. I meditated on so many subjects that I think I wore them out. I can truthfully say that I think I actually started to run out of thoughts. I made lists of many things and issues and was able to remember things from my childhood that I could not do now—phone numbers, addresses, names of people, etc. I believe that everything we experience is there in our mind and we can access it when the mind is clear.

The time in solitary was really like going away on a retreat in a cave somewhere, and that is why I wouldn’t trade that time for anything. Once the decision was made to not attach to these negative thoughts, the remaining time spent in that cell was wonderful. A comparison could be to do a solitary-type meditation retreat for about two years. I would not trade that time in solitary for anything.

Realizations of impermanence were fully understood for the first time. What did I really need? Not much. Food, water, some clothing, and maybe a roof over my head. That’s it.

One subject that comes up time and again in discussions in the Buddhist group at the prison I’m currently in is the issue of the material goods that we had before and now no longer possess. I was definitely attached to countless items. Now, we only have what can be considered bare necessities. Because of the small space which we must occupy with others, our property list is quite small. In some prisons you are not even allowed any personal clothing which takes away another element of our personal identity. Although my family did not possess much while I was growing up, as our family business grew, we accumulated many material goods. I was materially wealthy, but spiritually poor. Now it is the opposite and I am very happy. If I chose to posses some of the items I had before, my appreciation of them would be very different. I would not identify myself with these items, but would know that they are only there to help make living a bit easier. Does one really need three cars? How many towels can one use at one time? My meditation practice plus living in prison has allowed me to experience the fact that one does not need too much to live.

During the time I meditated in solitary, I also came to understand my attachment to others. I comprehended that although having the people who are dear to me around was nice, it was not necessary. I also realized that when I got upset, it was often because of my expectations of them.

Realizing that everything begins and ends with myself and that I must take responsibility for my own feelings, thoughts, and actions completely changed my thought process. Stress? Why would I want to subject myself to that? Why would I choose to suffer? Anger? What am I afraid of? That does not mean that frustration doesn’t raise its head, but when I see it coming I make a full attempt to let it pass by like a wave in the ocean, knowing full well that it will eventually, so why not now.

For others who are incarcerated and dreaming of entering a monastery, where you are is a good place to practice the Dharma. It is an opportunity that can not be undervalued at all. Don’t waste your time!