A paper presented at the World Buddhist Conference in Kuala Lumpur, Malaysia on September 25-26, 2010.

All of us know about the environmental degradation that our planet faces and we may have some inklings of how, if it is not checked, it will affect our lives and those of future generations. Nevertheless, most of us tend to get stuck when it comes to responding to this situation in an appropriate way. Instead we get side-tracked by feelings of helplessness, blaming others, and lack of mindfulness. Let’s investigate these detours and see what we can do to overcome them.

Last year, I attended a Buddhist monastic conference on the environment and learned that there is now a new psychological ailment called “climate anxiety or environmental anxiety.” That is, people look at the environmental devastation and become fearful, angry, anxious, or apathetic in response. There is so much to do and so little time to make the necessary changes that, rather than face the challenge with creativity and fortitude, we stay stuck in our emotions and do very little. It is as if a corner of our mind thinks, “If I can’t fix this problem quickly and easily, why even try?” and we sink into despair. 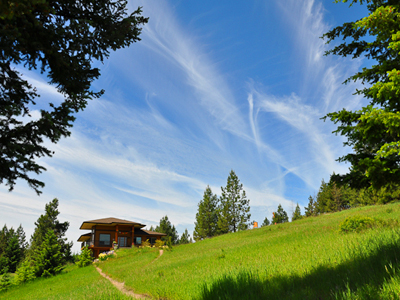 Making efforts to protect the earth is in accord with the Buddha’s teachings.

This debilitating mental state becomes an extra, added obstacle to remedying the problem of global warming. It is also opposite to the attitude the Buddha encourages us to have as a Dharma practitioner. If the Buddha thought that since infinite sentient beings are drowning in cyclic existence, it is impossible to lead all of them to liberation and if he threw up his hands in despair and refused to teach after he attained enlightenment, where would we be? But the Buddha knew that just because something is difficult, it doesn’t mean we give up and don’t act. Instead, he knew that whatever he did to teach and guide sentient beings would benefit them, even if the final objective of all of the countless sentient beings attaining enlightenment was virtually impossible. He called up his hope, optimism, and joyous effort and did whatever he could, and so must we to heal the natural environment.

Avoid blaming others by being responsible for our part

Another way our mind becomes side-tracked is by blaming others for the environmental mess, complaining, “This is due to the greed of corporations, their CEOs and shareholders. It’s the fault of engineers who didn’t plan ways to stop the flow of oil should a rig break in deep-ocean drilling. The government isn’t doing enough to control companies and stimulate research into alternative energy strategies.” This way of thinking creates feelings of helplessness, which we mask with rage and blame. It is a clever way that our self-centered thought has of abdicating our own responsibility, expecting others to fix everything, and justifying our lack of involvement.

Instead of attributing evil intentions to others, we would be better off examining our own minds, owning our bad motivations, and changing them. Instead of pointing the finger at others’ greed, how about acknowledging our own? After all, we are the ones who over-consume and deplete natural resources. I think it would be more productive to look at what we could do to change than to get stuck in finger-pointing. This is not to say that we overlook the carelessness and greed of corporations and the inertia of government. Those have to be called to people’s attention. However, let’s not think that we are not involved in the problem, for we have bought into the view of a materialistic society that wants to consume without restriction.

This leads us to examine how we live “on automatic,” with little heedfulness and mindfulness regarding how our individual lifestyles affect the planet. For example, some years ago I met a couple who were both university professors teaching ecology. They cared deeply about the environment and the people and animals living in it and were very concerned about global warming. One day their children came home from school and said, “Mom and Dad, we need to recycle our paper, plastic, metal, and glass to protect the environment,” and “We want to carpool with our friends when we go to after-school activities. Can you carpool with other professors when you go to work? Or how about riding the bus? Let’s get cloth bags for our groceries. Using so much paper and plastic isn’t good for the environment.”

The parents were surprised. They had never thought about the effect of their own lifestyle on the environment. They had not taken into consideration what they could do on an individual level in their daily lives to protect the environment and living beings they cared so much about.

Acting in a more environmentally-conscious manner in our own lives is an antidote to feelings of despair, helplessness, and anger. In doing this, we face the mind that says, “But it is inconvenient to carpool or ride the bus. I want to go and come by myself when I want to,” or “It takes time to clean glass, cans, and milk cartons and to separate recyclables,” or “It’s tiresome to keep track of cloth bags. It’s so much easier to get a bag at the store.” Here we have to face our lazy and self-centered attitude and remember that we live in an interdependent world. Recalling that each and every sentient being wants to be happy and avoid suffering as intensely as we do, we focus on the kindness we have received from others. This way of thinking generates within us a strong determination to live in a way that cares for other living beings. If this means enduring some inconveniences, we can do that because it is for a greater purpose. In this way, we should encourage ourselves, knowing that we will feel better about ourselves when we think and act in ways that care for others.

I think that if the Buddha were alive today, he would establish precepts to recycle and to stop wasting resources. Many of our monastic vows arose because lay people complained to the Buddha about what monks or nuns did. Each time this happened, the Buddha would establish a precept in order to curb the detrimental behavior. If the Buddha were alive today, people would complain to him, “So many Buddhists throw out their tin cans, glass jars, and newspapers! At the temples they use disposable cups, chopsticks and plates, which not only make more garbage but also cause the destruction of many trees. They do not seem to care about the environment and the living beings in it!” I would feel embarrassed if I was doing that and someone complained to the Buddha about my behavior, wouldn’t you? So even though the Buddha isn’t physically here to establish a precept to recycle and to curtail consumption, we should voluntarily do this as it is in accord with his teachings.

Stay connected in the heart

After the oil spill in the Gulf, someone told me that the constant images in the media of birds and sea animals covered in oil and dying brought up feeling of sadness as well as anger in her. She asked me how to work with the situation, seeing that she could do little herself to remedy the situation.

I recommended doing the taking and giving meditation (tonglen in Tibetan) to increase our own love and compassion. Here we imagine taking on the suffering of others—in this case the birds and sea animals—and use it to destroy our self-centered thoughts and then imagine giving our body, possessions, and virtue to others to bring them joy. It is good to do this meditation for the oil company executives and engineers as well as for all the people affected by the oil spill. In this way, we remain connected to those living beings in our heart and avoid falling into apathy. In addition, this meditation enhances our love and compassion so that when we have the opportunity to directly benefit others we will be more willing and confident to do so.

We are all citizens of this planet and thus each of us has the responsibility to be mindful of how we use its resources. Rather than indulge in blaming others for environment degradation and climate change, feeling helpless to do anything about it ourselves, falling into the stupor of apathy, and being heedless regarding our own personal impact on the environment, let’s do our part—however big or small that may be—to lessen and stop climate change and the destruction of nature. In this way, our lives will be meaningful and our minds optimistic as we bring the Buddhist principles of interdependence, wisdom, and kindness into our daily actions.