Peter Aronson prepared this guided meditation when he led a meditation on impermanence and death at a retreat given by Venerable Thubten Chodron.

One day, your life is definitely going to be over, and since you have no way of knowing when you’re going to die, it’s a good idea to be prepared. So now we’re going to do a meditation where you will imagine your own death.

Imagine you’re on an airplane leaving after this retreat. This is not some abstract airplane, but a specific one. Look around you and note what airline you’re flying on. Notice what seat you’re in, and whether it’s an aisle or window seat. Smell that airplane smell in the air. See the tray table in front of you, and feel the seat belt.

You’ve already had a cold drink, and a tiny bit of airplane snack food. You’re relaxed, you’re feeling good. Maybe you’re reading, or napping, or you’ve just come back from the lavatory. A typical flight. Take a few moments to get a clear image of the scene in your mind.

All of a sudden, you see three men jump to their feet, shout something in a foreign language and run toward the cockpit. There’s a commotion at the front of the plane, and you see blood spray on the ceiling. People are screaming now. Your heart is pounding. Your blood feels cold.

There’s an explosion. A flash and a boom at the front of the plane. After a few minutes, you learn that the terrorists were killed in the blast, but the pilot and co-pilot are also dead. The plane’s controls have been damaged beyond repair. It’s still flying, but there’s no way to land the plane. It will just keep going and going and going for a few more hours until it runs out of fuel, and then it will drop out of the sky and plummet to the earth. 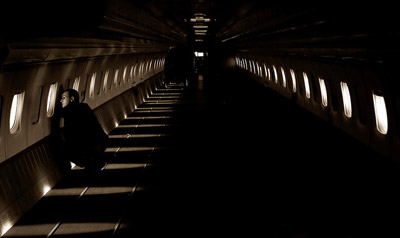 What weighs on your mind? What mistakes have you made in your life? (Photo by Joe Edwards)

Some time goes by. The plane enters some dark clouds, and you begin to feel turbulence. All the lights are off, and there’s no pilot left to comfort you, just the noise of the wind and the engine and the crying and screams. You’re thrown around wildly in your seat. After a time, it smooths out again, but the plane is flying much lower now. You think about all your friends and family on the ground, and how safe they are, while your own life is going to end so soon, even though you’re so healthy, and so full of a desire to live. Think about this.

More time passes. You hear one engine go quiet, and the plane begins to turn. You’re flying in circles now. Automatically you begin to think about your life, your whole life. From the time you were a child until now. So as you look back on your life, what has been worthwhile? What do you feel good about having done? What has created positive imprints that will help you have a good future rebirth? Consider this for a while.

And as you look back over your life, what do you have regrets about? What weighs on your mind? What mistakes have you made in your life?

Before the plane hits the ground, who do you need to forgive? How can you let go of that anger? Now bring your awareness back to the meditation cushion. You’re sitting here again, back in the relative safety of this room. Temporarily, you’re still alive. But one day in the future, everyone in this room will be dead, without exception. Knowing that one day you WILL die, what is important to you? What are your priorities?

What is unimportant to do? What is useless? How do you want to live the rest of your life, whatever time you have left?

Feel deeply, in your guts, how important it is to make life meaningful while you still have a chance. And with that feeling, come to some definite conclusions about how you want to live from this moment until your last.

Peter Aronson is an award-winning journalist with a total of two decades of experience working in radio, print, online journalism and photography. His radio work has been featured on NPR and other national U.S. public radio networks and shows, and he worked as a news producer-editor for MSNBC.com. He produced two 30-minute radio documentaries and has won national and regional journalism awards. He has reported from the mountains of Mexico and the Moskva River, from Microsoft headquarters and from call centers in India. He also worked as a vice president in the corporate world — in India.
View all posts by Peter Aronson →

Meditating on our precious human life