Andrea Miller [AM]: I would like to ask you about the topic of full ordination for women and about the Conference in Hamburg, Germany, in July of this year.

Venerable Thubten Chodron [VTC]: I really appreciate your interest in the topic of full ordination for women. There are many women and men in the West who would like to practice as monastics, and the subject of monastic life is not understood very well in the convert Buddhist population. So it’s really worthwhile that you want to make your readers aware of this as well as to remind people of the value of gender equality when we bring Buddhism to the West. In Asia, the topic of ordination lineages for women is about women specifically, but in the West I believe the larger issue is the existence of monastic lifestyle, which emphasizes simplicity and ethical conduct as a path of practice, in a culture that emphasizes consumerism and a “do what you want as long as you don’t get caught” mentality.

AM: Why is it important to restore or establish Buddhist ordination lineages for women?

VTC: Establishing the Bhikshuni Order in countries where it presently exists and arranging for its restoration in Buddhist traditions where it does not presently exist is very important for several reasons. First, having the fourfold community—bhikshus, bhikshunis, upasakas, and upasikas (fully ordained monks and nuns, and male and female lay followers)—establishes an area as a “central land,” a place where the Buddhadharma flourishes. Without bhikshunis, one quarter of the Buddhist community is missing.

Second, looking at all Buddhist countries, we clearly see that the level of education nuns receive and the ability they have to serve their societies correlates with their level of ordination. In countries where women are permitted to receive only eight precepts or ten non-monastic precepts, their education and ability to serve society is hampered. In countries where women can become novices, their potential is improved. And in countries where full ordination as bhikshunis is available, women have better Buddhist education, are able to practice more extensively, and have more skills to benefit society. The nuns in those countries also receive greater financial support and respect by society. While the goal is not financial support and respect—as monastics we are trained not to be attached to these—having these enable nuns to have the facilities to train and to set up institutions that can benefit others in society. 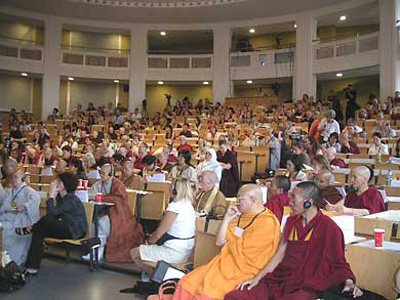 There are many women and men in the West who would like to practice as monastics, and the subject of monastic life is not understood very well in the convert Buddhist population.

Third, women have sincere spiritual aspirations and living in higher ordination will help them accomplish these. The foundation of Dharma practice is the Higher Training in Ethical Conduct, and the Buddha said that the best way to cultivate that is by living in the precepts of full ordination. The Buddha himself was a monastic and lived that lifestyle. On the basis of full ordination, women will more easily be able to accomplish the practices of the Higher Trainings in Concentration and Wisdom as well as the practices of bodhicitta and the six perfections. Thus being able to become bhikshunis is important for women as individuals because it enables them to actualize their spiritual potential. In the long term, the presence of more enlightened beings benefits us all.

Fourth, bhikshunis will naturally benefit the societies they live in. For example, in Taiwan and Korea, bhikshunis teach Dharma to the lay people; they operate Buddhist radio stations and publish Dharma books; they teach Dharma to children. In Western countries, both men and women want to study with female teachers, and full ordination gives women a good basis upon which to learn the Dharma, practice it, and then share it with others through teaching, leading retreats, and counseling. In particular, many lay women are more at ease forming a teacher-student relationship and discussing personal issues with nuns than with monks.

Bhikshunis with peaceful minds and excellent comportment set a wonderful example for practitioners of both sexes, who will be inspired to practice. Bhikshunis who are teachers and leaders will inspire women and men to actualize their potential to benefit others.

The Buddha himself affirmed women’s ability to attain enlightenment and established the Bhikshuni Order. It is important for the Buddha’s followers in the 21st century to act in accord with the Buddha’s intentions.

AM: What were you hoping the Hamburg conference would achieve?

VTC: I try not to have many hopes and expectations. While some people had hoped His Holiness the Dalai Lama would issue a statement establishing bhikshuni ordination in the Tibetan tradition, I did not expect that. His Holiness has repeatedly said that this is a decision to be taken by the sangha, that one person cannot do this. I am also aware of the conservative opinions of many Tibetan monks and that education regarding bhikshuni ordination is very much needed in the Tibetan community. Consensus building in the Tibetan community is also essential and will take time.

I thought the conference would achieve the following:

AM: What did the conference achieve?

VTC: The conference achieved all of the above and was a great success. It was a historic step along the path towards the establishment of the Bhikshuni Order in all Buddhist traditions. Many old friendships among nuns of different Buddhist traditions as well as among monastic and university professors were renewed and new ones formed. I was touched by the support the nuns received from the professors, who understood our spiritual aspirations.

There was extensive sharing about research done on the Vinaya and the history of the Bhikshuni Order. This is very useful because the key issue is how the ordination can be established if the bhikshuni lineage is not existent in particular Buddhist traditions. For example, a bhikshuni sangha never existed in Tibet, which is the only country that follows the Mulasarvastivadin Vinaya tradition. Thus Tibetan monks wonder if it’s possible for the bhikshus alone to give the ordination when the Vinaya says that the bhikshuni sangha must also be involved. Can bhikshunis from another Vinaya tradition—for example, the Dharmaguptaka followed in East Asia—participate in the ceremony? For Tibetan monks, the technicalities of a proper ordination are of great importance and so we try to meet them on their own ground and help to do the research that pertains to their concerns.

There was extensive press coverage of the conference in Germany. At the teachings His Holiness the Dalai Lama gave in Hamburg just after the conference, the general audience was very respectful of the nuns. The public was interested and supportive.

Personally, the process of preparing for the conference gave me the opportunity to learn a great deal about the various Vinaya lineages—their history, practices, and so forth. This was fascinating. Several of us monks and nuns from various Buddhist traditions were in regular email contact with each other before and after the conference and have learned a lot from each other.

In terms of the topic of my paper—discovering a precedent in Tibet for a sangha composed of monastics from different Vinaya lineages to give an ordination—I enjoyed doing the research together with Ven. Tien-chang, a Chinese bhikshuni. We investigated the 9th or 10th century ordination of Lachen Gongpal Rabsel in Tibet, which re-established the bhikshu lineage after Buddhism had been severely persecuted by the Tibetan king Langdarma. It was inspiring to think of these previous generations of sangha, due to whose kindness in continuing the monastic lineage I have had the opportunity to ordain in this life. The efforts they went to in order to keep this valuable tradition alive inspires me to do the same as we engage in the challenge of establishing monastic communities in the West.

AM: How do you feel about what the conference achieved or didn’t achieve?

VTC: I feel satisfied and optimistic. His Holiness called the participants together in an impromptu meeting the day after the conference and outlined steps to take in the future. He very much wants there to be bhikshuni ordination available in the Tibetan tradition.

VTC: There is a lot of work to do. His Holiness would like there to be another international conference on bhikshuni ordination, this time in India hosted by the Tibetans. Prior to this, Tibetan nuns need to learn more about the purpose and value of receiving full ordination as bhikshunis. Tibetan monks need to be educated so they see the benefit of having fully ordained nuns. Much Vinaya research has been done already, and this needs to be shared and the information widely distributed amongst Tibetan monks in India and hopefully in Tibet as well. Further research needs to be done as well. Many people are already engaged in bringing all these projects to fruition.

In the West, there needs to be more education so lay practitioners see the value of monastics and monastic communities in general and of fully ordained nuns in particular. It is essential to keep raising the issue of gender equality in Buddhism so that all people will have equal opportunities to learn and practice the Dharma.

Bhikshuni ordination in the Tibetan tradition