I recall the day that religion died for me: it was the day spirituality was born. I was 12 years old at the time, standing in The Pajama Room, contemplating life.

The Pajama Room is what my sister called the disciplinary room at the rehab center. It got its name from the paper hospital clothes, complete with matching blue booties. That they made you wear in The Pajama Room.

There was, however, a window in The Pajama Room. It was picture-window size, quite large. Of course, it was reinforced with steel frames and security mesh that ran through the glass itself. Can’t have people breaking free from their misery, now can we?

Looking out the window was like looking onto the landscape of my life. It was wintertime, just after Christmas. There was a little tree, fragile and lifeless, standing outside the window. The grass was dead too, as though it was showing its love for the dead tree, joining it in lifelessness. The sky was bleak, as though the sun would never shine again.

I spent many hours looking out of that window, wondering how I had gotten into The Pajama Room; wondering where I’d go from there; wondering if the security mesh of life would keep me from freedom.

There, in the midst of my brooding and anger, it happened. I should have seen it; it was a long time in the making. But I didn’t. Nor did I realize it had happened until long after the fact. Whatever the case, it happened there. God died in there, while I sat remorse, there in The Pajama Room. Not God, great-big-ol’-father-figure-in-the-sky God, though he was part of the equation, but God anyone or anything outside of myself that could fix me.

Sitting in The Pajama Room, contemplating life, I had finally come to accept what everyone had been telling me for so long. I was broken. Not just a kid who acted “bad” every now and again. I was completely broken. I was worthless.

Don’t get me wrong; it was not that I stopped believing in the existence of such things. I had quite a long history of churchification and occultism, and everything else in between, which ensured that I would not let go of belief so easily. I had pled to every kind of being I had read about in my short 12 years of life: “Please, please stop the suffering that is my life.”

There in The Pajama Room I finally came to accept it though, finally come to accept the fact that if such a being existed, it just didn’t care. God was no savior, no matter what form he or she took. I smile now, recalling the irony of my act, my eulogy to God if you will.

When I got out of The Pajama Room, I returned to my room for privacy. Standing there in the bathroom, clutching the disposable razor I’d convinced the orderly I needed for my three chin hairs, I pried the blade free from its plastic encasement. Laying it next to the ink pen I had placed on the sink, I removed my shirt and stared down at my hairless chest. Without much thought as to why, or even the significance of the symbol, I picked up the razor and began to carve—of all things—a Sign of David into my chest. The cuts weren’t very deep; it was a disposable razor, after all. They were deep enough, though, to bring a bright red bleeding star to my chest. Setting the blade down, I picked up the ink pen. I didn’t know at the time that there was a difference between tattoo ink and disposable pen ink. I pried off the top of the pen and began smearing ink in my wound. I wanted this star to remain, there on my chest, as a reminder to the world that yes, I was broken. Never again would I forget that all hope was lost. In my 12-year old mind, this act said all that.

Well, I didn’t accomplish my goal, and the star only lasted for a week or so. But I believe the star saved my life. Had I not found the inner strength to make that mark of defiance, I might have given in to the overwhelming sadness and ended it all. After all, I wanted to die back then, and I spend many hours trying to figure out how to do it painlessly. My mark, my stand against the suffering of life, somehow kept me going.

What’s more interesting to me, now in retrospect, is what was born in me that day. As with all birth, it began with blood and ended with tears. Guess you can say I had a long delivery, though, as the blood came when I was 12, the tears when I was 20. When I was 20, I was sitting in a prison cell, finally convinced of what I had first started to believe all those years ago. Now, not only was everyone telling me that I was broken, there in my prison cell (in administrative segregation—solitary confinement—for disciplinary reasons, no less), I had proven it, proven them all correct. I was broken. There was no one to fix me, and there was no hope.

So why did I start this discussion by saying that the day religion died in me spirituality was born? Religion is a process of looking to the world outside of yourself for assistance. Religion is looking for the world around you to fix you. I gave up on that, at the young age of 12, in The Pajama Room. I gave up on the idea that the world would ever fix me. That was the death of religion for me. 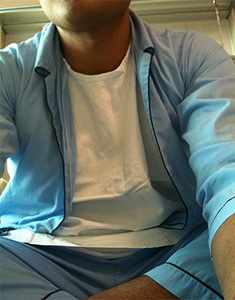 We can be fixed, but we have to fix ourselves. (Photo by Gurmit Singh)

At that time I didn’t think I could be fixed, so I can’t say that spirituality was fully formed in me. But the process was begun. The seed was planted. On the day I first considered the Four Arya Truths, there in the administrative segregation cell—the pajama room which was my current residence—on that day I figured out I could be fixed. I could fix myself. That’s when spirituality was born in me.

I am, in fact, a long way from fixed. I have a mountain of shame which every now and then grows oppressively high. And just in case I ever forget “broken,” just in case I might start to think I’m alright … I just have to look around, to look at “where I live,” and I remember how I got here. I can never take that back. It will never go away.

So, when I say I am the only one who can fix me, it is not some grandiose idea of how suited I am to the task. Lord knows, if this were an interview to decide who was most suited to the job, I would be the last one to hire me to fix me. Unfortunately, there’s no one else who will do it, as I have learned, and no one else who can do it.

Which brings me to the point. It is often the case that we as American Buddhists come to Buddhism not as Buddhists but as apostate Christians/Muslims/Jews/Etc-ers. We come to Buddhism saying, “Oh, right; no father-son-holy-ghost business.” But what we really mean is “I like that Buddha-God fellow.” What we mean is, “Well, I wanted to be fixed by one of the other Guys, but they didn’t seem to be up for the job when it was offered, so I’m going to try the new Guy on the block. Maybe he can do it.” As a man with a mountain of problems, I can tell you that this new guy, the Buddha, can’t fix your problems any better than the others.

So if this is all true, if I really am still broken and the Buddha can’t fix me, why do I have such faith? Why do I trust in the words and teachings of a being I know can’t do the one thing I want anyone, in this world or some other, to do for me? Why do I trust a being who can’t fix me, can’t make me whole?

Many incarcerated people from all over the United States correspond with Venerable Chodron. They offer great insights into how they can be of benefit to themselves and others in even the most difficult of situations.
View all posts by Incarcerated people →
Building confidence and self-esteem