You are here: Home > Practical Buddhism > Prison Dharma > By Incarcerated People > On Compassion > Working with inmates
By G. S. on Apr 16, 2007 in On Compassion

Venerable Thubten Chodron was invited to give two talks at Harvard to people that volunteer in prisons. Knowing that inmates know best what effect volunteers have, she asked G. S., a prison inmate who is her student, “What do you think is important for people who work with inmates to know? What do they need to understand? To do or not to do?” The following is his response. 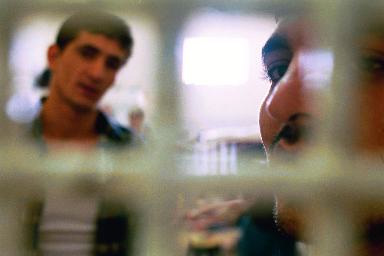 Inmates are no different than those on the outside. Suffering is suffering: we all experience it. (Photo by Physicians for Human Rights – Israel)

Hmmm. An interesting thought. I’ll describe it in writing as best as I can, I think that compassionate people who choose to do prison work should truly believe that we inmates are no different than they are. After all, suffering is suffering: we all experience it whether we’re incarcerated or not.

I have found that a few volunteers come off as condescending, as if they didn’t have problems and must save the “poor wretched prisoners” from their hellish existence. This is the wrong mindset because it puts more obstacles in the path of trust. Instead, they should see us as we are, just like people on the outside. If they can get beyond judgmental attitudes about the crimes we committed, they’ll see there really is no difference between us. Those who volunteer to lead meditation or Buddhist groups should know that some of us in here are very serious spiritual seekers. Some inmates have been practicing for years, even decades. Finally, I suggest that they assume nothing and come in with a fresh and open mind.

I hope this will help you in your future talks with those who work with prisoners. It seems like so many who do this work—as kind as they may be—put out that it’s more about them and what they are doing for the “poor misguided prisoners” than any real Dharma practice. I do not mean to sound harsh or unappreciative. For some of us, this is the only chance we have for a qualified formal Dharma practice.