This morning I was informed by someone who wrote to this website that yesterday L. B. held a female guard at Oregon State Penitentiary hostage before releasing her unharmed three hours later. According to the news report, he is now being held in a psychiatric ward in solitary confinement.

I was extremely saddened by this news—sad for the guard’s suffering and sad for L’s suffering. As a human being and as a woman, my heart goes out to all those whom L has harmed. I pray for their wellbeing as they heal from physical and mental trauma. L first wrote me in 2002 and we have corresponded since then. However, since he was released from IMU (Intensive Management Unit) a couple of months ago I have received only one letter. In that letter, it sounded like he was having difficulties, experiencing a lot of paranoia and fear being with others in general population again.

I’ve read many of L’s writings, including poetry that is on this website. He suffers from mental illness for which he has not received proper treatment either before or after he was imprisoned. The Dharma has been a refuge for him and a light in the midst of his suffering and confusion. His writings on this website illustrate that. Still, practicing the Dharma does not bring about quick remedies to deeply seated difficulties and karma, as those of us who use the Buddha’s teachings to work with our own unruly thoughts and emotions can attest. Although I have seen positive changes in L over the time of our correspondence, his disturbing impulses can still overpower him. 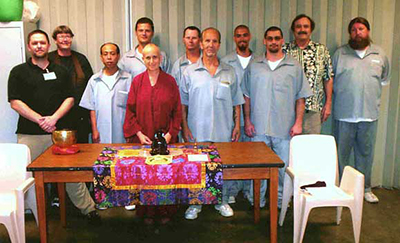 While some may abandon compassion and dissociate themselves from a person who has harmed others, I will not do this.

While some people may be tempted to abandon compassion and dissociate themselves from a person who has harmed others through his actions, I will not do this. Perpetrators and victims of crimes both suffer, albeit in different ways, and compassion for everyone involved in such a situation is called for. A person is not his actions, although he is responsible for his actions. The person has Buddha nature—he is not inherently evil. Such sentiment towards those who do criminal actions is encouraged by many religious traditions. Jesus said, “Let you who have not sinned throw the first stone.” In other words, we too have done harmful actions because we have the seeds of ignorance, anger, and fear inside of us. Still, his harmful actions must be censured. While our actions may not have been as harmful as L’s have been in this lifetime, we would like for others to have compassion for us when our minds have been overpowered by negative emotions. Similarly, we can open our hearts with compassion for L as well as for the victims of his crimes.

Compassion does not mean we condone destructive actions. It means we have compassion for the person who commits them. That person needs to be incarcerated in a living situation where there is not the possibility for him to harm others or himself. He needs proper medical and psychological treatment, and he needs compassionate connection with other human beings in order to overcome the factors that motivate his harmful actions.