I recently returned from a winter sojourn in Mexico, the first week spent leading a week-long Lamrim course/ retreat with 120 people, organized by Casa Tibet. This was followed by a month-long meditation retreat attended by 30 people, held at Tonalli, a beautiful retreat center in the countryside a few hours outside Mexico City. This was co-organized by DFF and Casa Tibet, and the blend of Mexicans and Americans meditating together was wonderful. The Americans were touched by the warmth of the Mexicans, their community spirit, and the instinctive feeling they had for the Dharma. The Mexicans benefited from strength and focus the Americans gave to the retreat due to their their serious attitude towards practice and their familiarity with the Manjushri sadhana. 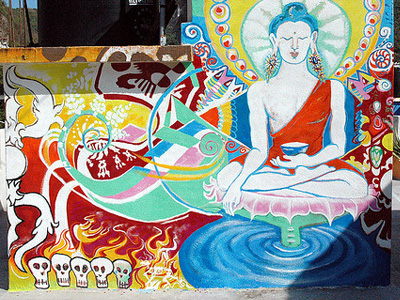 It’s wonderful what people can do and how they can change when they’re able to concentrate on the Dharma with a supportive community in a good environment. (Photo by Wonderlane)

The retreat was held in silence, with six meditation sessions a day. No one missed a session the entire retreat, despite the difficulties of dealing with aches and pains of a body unused to sitting for so many hours a day. Almost everyone attended the optional seventh session of prostrations and The King of Prayers at the conclusion of the day. I would be inspired to see everyone meditating so diligently. It’s wonderful to see what people can do and how they can change when they’re able to concentrate on the Dharma with a supportive community in a good environment.

I’d given a series of talks on the Manjushri practice in Seattle in the autumn, and these were taped and sent to Mexico, so that people could prepare for the retreat beforehand. In the months preceding the retreat, in both Mexico and Seattle, the participants met together weekly to do the Manjushri practice so that they would be familiar with it before beginning the retreat. Still, during the first part of the retreat, participants listened to the tapes again, which they found beneficial.

While the group did Manjushri retreat in a larger room, I did solitary retreat in my room. I followed a slightly different schedule than the group, although we saw each other during meals and walking meditation. Once a week I met with the group for an informal question and answer and check-in session, during which people asked remaining questions about the meditation and about working with their mind and emotions.

The weather was generally warm and wonderful during the retreat, though it rained before New Year’s Eve. At that time, after the students left the meditation hall one afternoon, they saw a huge, perfect rainbow. After meditating so much on emptiness in conjunction with Manjushri, the Buddha of Wisdom, they reflected that the rainbow exemplified what they were aiming to understand. It looked real but was intangible and unfindable. Nevertheless, produced by causes and conditions, it appeared and functioned to delight their minds.

At the end of the retreat, to enable people to summarize the highlights of the retreat, I asked them to write about what they had learned. The last day, we did a go-around, during which people shared their reflections. I was very impressed with their thoughtful comments. It was clear that they had done serious practice and really benefited from it. They saw their ego’s machinations and worked on them and also recognized their good qualities, giving them a new sense of self-confidence. Their refuge in the Three Jewels deepened, their bodhicitta expanded, and their understanding of emptiness deepened.

As the “leader” of the retreat, I learned that one of the best ways to lead is to set up a conducive structure in a good environment, give the teachings necessary to do the practice, and then get out of the way and let the students take the ball and run. In that way, people develop confidence in their own ability to work with their minds and to practice, and the retreatants bond together and support each other well.

Both the course and the retreat went extremely well. People were “blissed out” at the end of the retreat, and the feeling was contagious. Their family and friends who met them in Mexico City could see the difference. The retreatants immediately requested another month-long retreat again next year. We set the dates, so people can begin preparing now. The month-long Chenresig retreat will be December 15, 2001, to January 13, 2002, and the Lamrim course/retreat will be January 15-20, 2002.

The purpose of precepts