Recently, I went to hear Archbishop Desmond Tutu at Seattle University, which was conferring an honorary degree on him. The event began with a Seattle-based African group of drummers and dancers that were excellent. Following behind them were all the professors, etc., dressed in their gowns and hats, and then a group of international students. Various people from the community and university did welcome speeches, throughout which Tutu looked bored. I can imagine that for someone who has been what he has been through, to now hear words of praise seems quite strange. When you’re in the thick of working for peace, dealing with people who criticize, blame, and hate you, you have to reconnect with the deep motivation and spirituality in your heart to keep going. There’s no time for daydreams about receiving honors, when your own life and the lives of others are at risk. I think that ceremonies such as this one are for the benefit of the audience, not the person being honored. They help people touch their own good nature.

Tutu is a small man, frail looking, but very passionate, powerful, and extremely humble when he speaks. He reminds me a lot of the Dalai Lama. The two of them have met; one time His Holiness, when talking about inter-religious dialogue, said, “Archbishop Tutu told me…” Must have been quite a meeting!

Of course he spoke from a Christian view, but his message was one of hope and openness. After he listed the world’s ills, he then said: but this century has also witnessed the fall of communism and fascism, the end of apartheid, renewed efforts for peace, thus helping everyone to see what has been and can be accomplished when people work together. He commented on youth: Not all of them are on drugs (the audience laughs). Young people want to see a world with less hate, more justice and equality, and they want to contribute towards this aim. 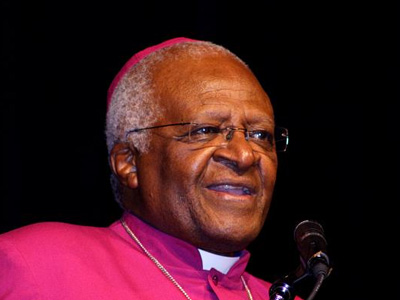 We are part of a large human family. We shouldn’t wonder what to do with our budget surplus! We should spend it helping each other. (Photo by Joshua Wanyama)

About the Truth and Reconciliation Commission which heard the stories of victims and perpetrators of apartheid: the perpetrators look like everyone else. They are not evil people with horns on their heads and tails growing from their backside. They are husbands and fathers who care for their families. At the same time, they did things that it’s difficult to listen to. For example, after slaying one youth, they burned his body and while it was burning, they sat by the side enjoying a barbecue of cow’s meat and human meat.

About self-confidence: a physicist spoke to a priest, telling him all the reasons why he doesn’t believe in God. The priest responded, “But God believes in you.” From there Tutu talked about human potential, saying, like Buddhists do, that people are by nature good. This really touched the audience and gave people a feeling of hope and confidence in their own ability to effect positive change.

He encouraged everyone to see that we are part of a large human family. In our family, we wouldn’t wonder what to do with our budget surplus! We should spend it helping each other.

The future is stainless, open time, with infinite potential. Yesterday is history, tomorrow is mystery. Today is a gift, and that’s why it’s called “the present.”

On behalf of his country’s people, he thanked people for supporting the economic sanctions against the apartheid South African government. Emphasizing the unity of all people, he told the audience, “I wave my magic wand and transform you into South Africans. Now thank the people in America for all they did to help you in your struggle for freedom.” The audience of course applauded. And when they finished, he said, “If someone helps you gain your freedom, do you thank them by clapping sitting down?” at which point everyone stood up and the expression of happiness in the room was incredible.