You are here: Home > Approaching the Buddhist Path 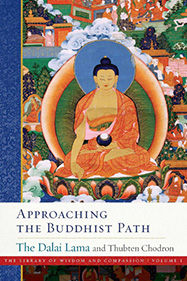 The Library of Wisdom and Compassion

The Library of Wisdom and Compassion is a special multi-volume series in which His Holiness the Dalai Lama shares the Buddha’s teachings on the complete path to full awakening that he himself has practiced his entire life. The topics are arranged especially for people not born in a Buddhist culture and are peppered with the Dalai Lama’s own unique outlook. Assisted by his long-term disciple, the American nun Thubten Chodron, the Dalai Lama sets the context for practicing the Buddha’s teachings in modern times and then unveils the path of wisdom and compassion that leads to a meaningful life and a sense of personal fulfillment. This series is an important bridge from introductory to profound topics for those seeking an in-depth explanation from a modern perspective.

Traditional presentations of the path in Tibetan Buddhism assume the audience already has faith in the Buddha and believes in rebirth and karma, but the Dalai Lama realized early that a different approach was needed for his Western students. Starting from the universal human wish for happiness and the dynamic nature of the mind, His Holiness here provides a framework for the modern reader to make sense of this rich tradition. Subsequent volumes will delve more deeply into particular Buddhist subjects, but this first volume provides a wealth of reflections on Buddhist history and fundamentals, contemporary issues, and the Dalai Lama’s own personal experiences.

A distillation of all Buddhist wisdom, Approaching the Buddhist Path covers its history, philosophy, and meditation. Flowing in limpid language and powered by the dynamic reasoning of eminent Dharma authorities, it is suitable for all readers, beginner and advanced.
—Tulku Thondup, author of “The Heart of Unconditional Love”

We are living in an era when religion and science appear to be at odds and neither relates deeply to philosophy, and when many people regard all three—religion, science, and philosophy—as having little bearing on their own personal lives or on real-world economic and political crises. In this series of volumes, beginning with “Approaching the Buddhist Path,” His Holiness the Dalai Lama, with the capable assistance of Bhiksuni Thubten Chodron, illuminates a path of awakening that is deeply integrative and utterly relevant to all the challenges that face humanity in the twenty-first century. Presented here is an authentic path to freedom from suffering and its inner causes and to tapping into the full potential of consciousness—our own Buddha-nature. There can be no greater gift than this.
—B. Alan Wallace, president of the Santa Barbara Institute for Consciousness Studies and author of “The Attention Revolution”

It’s truly wonderful that His Holiness and Thubten Chodron are collaborating to produce this much-needed series of books on the Lam Rim designed for a modern audience. These books will be highly beneficial for teachers and students alike!
—Kathleen McDonald, author of “How to Meditate”

Continuing the fruitful collaboration they began with Buddhism: One Teacher, Many Traditions, H.H. the Dalai Lama and Ven. Thubten Chodron here provide the perfect entry-point for people drawn to the Buddhadharma but uncertain how to understand and practice it in a modern context. Like the great Lam Rim (stages-of- the-path) texts of Tibet, Approaching the Buddhist Path guides readers toward the Dharma by directly addressing their own values, interests, and qualms, utilizing wisdom, sensitivity, and humor to pave the way for confident engagement with the Buddha’s teaching. As the debut volume in His Holiness and Ven. Chodron’s 8-part Library of Wisdom and Compassion series, Approaching the Buddhist Path leaves us both richly satisfied and anticipating with delight what will come next.
—Roger Jackson, John W. Nason Professor of Asian Studies and Religion, Emeritus, Carleton College