Being kind to oneself

(The Buddha then repeats the entire statement of King Pasenadi and adds the following verses:)

If one regards oneself as dear
One should not yoke oneself to evil,
For happiness is not easily gained
By one who does a wrongful deed.

When one is seized by the End-maker (death)
As one discards the human state,
What can one call truly one’s one?
What does one take when one goes?
What follows one along
Like a shadow that never departs?

Both merits and the evil
That a mortal does right here:
This is what is truly one’s own,
This one takes when one goes;
This is what follows one along
Like a shadow that never departs.

Therefore one should do what is good
As a collection for the future life,
Merits are the support for living beings
(When they arise) in the other world.

Shakyamuni Buddha is the founder of Buddhism. He is believed to have lived and taught mostly in eastern India sometime between the sixth and fourth centuries BCE. The word Buddha means "awakened one" or "the enlightened one." "Buddha" is also used as a title for the first awakened being in an era. In most Buddhist traditions, Shakyamuni Buddha is regarded as the Supreme Buddha of our age. The Buddha taught a Middle Way between sensual indulgence and the severe asceticism found in the Sramana (renunciation) movement common in his region. He later taught throughout regions of eastern India such as Magadha and Kośala. Shakyamuni is the primary figure in Buddhism, and accounts of his life, discourses, and monastic rules were summarized after his death and memorized by his followers. Various collections of his teachings were passed down by oral tradition and first committed to writing about 400 years later. (Bio and photo by Wikipedia) 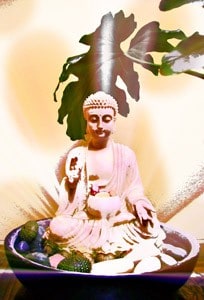 The preliminary practice of taking refuge