Question: In the Sutra on the Merits of the Fundamental Vows of the Master of Healing, the Lapis Lazuli Radiance Tathagata (Medicine Buddha), under the section “saving those on the brink of death or disaster,” it says:

Then, while his body lies in its original position, he is seized by the messengers of Yama who lead his spirit consciousness before that King of the Law. The inborn spirits attached to all sentient beings, who record whether each being’s record is good or bad, will then hand down these records in their entirety to Yama, King of the Law. Then the King will interrogate this person, and he will sum up the person’s deeds. According to the positive and negative factors, he shall judge him.

My question is: Doesn’t Buddhism teach selflessness? Why does this speak of a spirit consciousness? Doesn’t Buddhism say that karma is a system of cause and effect, and there is no one to judge us after we die? 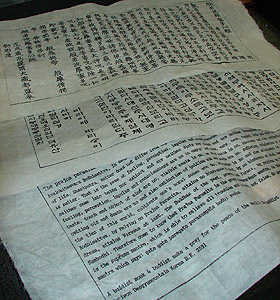 Any positive action we do has good results, and thus copying sutras and so forth, when done with an altruistic motivation or with trust in the Three Jewels, can help to purify negativities. (Photo by Asian Art Museum)

Venerable Thubten Chodron (VTC): This is an example of a passage requiring interpretation; it should not be understood literally. According to Buddhism, there is no spirit consciousness. There is no Yama or Lord of Death who judges us. I believe this section was included in the sutra because it corresponded with the way ordinary people saw the process of death and rebirth in ancient times. Remember most common people during those times were illiterate. They had heard many folk beliefs as they were growing up, and the ideas of Yama and spirit consciousness were familiar to them. Common people were not educated and did not know philosophical vocabulary such as “selflessness,” “dependent arising,” “emptiness,” and other concepts needed to express how karma actually functions.

Thus using the kind of language and concepts uneducated people were used to help them to understand more easily the idea of karma. The purpose of the Buddha saying this was two-fold. He wanted people to understand:

Question: If that is the case, couldn’t some people accuse the Buddha of lying, because everything the he said is supposed to be true. Won’t this cause some people to lose faith in Buddhism? Shouldn’t the Buddha know that in the future people like me, without profound knowledge of Buddhism, would misunderstand the meaning?

VTC: Maybe the Buddha knew that people like you would ask good questions to clarify their doubts, just as you have done!

After the Buddha’s life, great sages, scholars, and practitioners debated the meaning of many sutra passages because the Buddha said different things to different people on different occasions. What they noticed more than anything was the Buddha’s great skillfulness as a teacher. He knew the cultural, educational, psychological, and spiritual backgrounds of the people in the audience and spoke in the way best suited to the particular audience he was addressing at the time. For example, a good math teacher teaches differently when she’s teaching young children in pre-school, when she’s teaching in secondary school, and when she’s teaching in college.

The Indian sages wrote commentaries to the sutras. In them they delineated sutra passages that could be taken literally from those that required interpretation. They said that because the Buddha taught people what was appropriate for their particular level or way of thinking, he was not lying when he said different things to different people. These sages then set out guidelines so we would know what to understand literally and what required interpretation. They also taught guidelines for how to discern the difference between passages that gave the definitive meaning of emptiness and those that set forth the stages of the path and the variety of phenomena, and thus were interpretable.

For example, the sutras describe the world as being flat. We do not take this literally because scientists have proven that the world is round. The Buddha said this because this was the predominant view of society at his time.

Question: In the sutra mentioned above and in several other sutras, it says that many evils and much negative karma can be purified by copying, reciting, or making offerings to the texts. Is this true? Couldn’t someone think that he can do many wrongs but purify at the end and thus not suffer? Also, isn’t this unfair to the victims of that person’s harmful actions?

VTC: This does not mean that just by copying, reciting or making offerings to a sutra, all of a person’s negative karma will be gone. Any positive action we do has good results, and thus copying sutras and so forth, when done with an altruistic motivation or with trust in the Three Jewels, can help to purify negativities. However, just reading or writing a sutra without focusing on its meaning or with a good motivation, doesn’t have much good effect because it’s simply a rote activity.

The sutra talked about the good effect of copying the sutras and so forth to encourage people to purify their negative karma rather than to spend the rest of their lives feeling guilty and not practicing the Dharma because they feel so bad.

The fact that karma can be purified does not mean it’s okay to create negative karma. For example, a broken leg can be fixed, but does that mean breaking your leg is fine to do?

You seem to think that for the perpetrator of a harmful action to suffer is fair to the victims. As Gandhi said, “An eye for an eye would make everyone blind.” A victim’s pain is not alleviated by the perpetrator suffering. In fact, rejoicing in another’s suffering only creates more negative karma.

Question: I read in a book that bad deeds and good deeds can offset each other. For example I did two good deeds and two bad deeds today, so in the end I did nothing good and nothing bad. Is this correct?

VTC: Karma is very complicated; it’s not as simplistic as stated above. It’s true that constructive actions help to purify destructive karmic imprints, but many other factors are in play to determine the strength of any particular action (karma). We shouldn’t think that we can do a very harmful action and then a small positive one that will cancel it out. Instead, we should do our best to abandon all harmful actions, or at least minimize their strength. In The Great Treatise on the Stages of the Path to Enlightenment, in the chapter on karma, Lama Tsongkhapa explains some of the factors that make karma heavy or light.

Question: I read that we should not expect a reward when we do a good deed, but most of the time when I do something good, deep inside my heart I am hoping to get something good in return. Is it alright? It seems that I do good deeds just to get good rewards and not out of a pure heart.

VTC: People may be different in this regard. The first person may start out thinking, “I’m doing this to benefit all sentient beings (or at least to benefit one other person),” but their self-centeredness may sneak in later thinking, “I’m creating positive karma and will get something good as a result of this action.” The second person may start out with the motivation of self-benefit, “I’m creating good karma. Now happiness will come my way in future lives.” The third person may not think at all about future lives and simply have the motivation, “If I do this for someone, he’ll like me and will do something nice for me later on.”

Clearly, the purest motivation is bodhicitta, doing the action for the benefit of all sentient beings. But when self-centeredness sneaks it—as it will because we are ordinary beings—we should try to correct it. The first person should think, “It’s true, I may get a good result in the future, but when that happens, I will use that opportunity to increase my Dharma practice for the benefit of all.” The second person, although lacking a bodhicitta motive, at least has faith in karma and is dedicating his good result for a future life. That much is positive, for he’s not thinking just of his own personal happiness in this life. That person can rejoice for that part of his motivation and then try to expand it, first generating the determination to be free from cyclic existence, and then the aspiration for enlightenment (bodhicitta). The motivation of the third person is basically selfish, just thinking to get something good for himself as soon as possible. He needs to meditate on impermanence and death and the disadvantages of cyclic existence in order to improve his motivation.