You are here: Home > Practical Buddhism > Prison Dharma > By Incarcerated People > On Mindfulness > How spirituality changed my life
By Thubten Jampel on Jun 18, 2011 in On Mindfulness

Thubten Jampel is C. W.’s Buddhist name, received when he took refuge in the Three Jewels. He served a year in prison and met Venerable Chodron when she and others from the Abbey met with the Buddhist group at Airway Heights Correctional Center. Later, after he was released, Jampel’s CCO (Community Correction Officer) noticed the change in him and asked him to write about how spirituality changed his life. 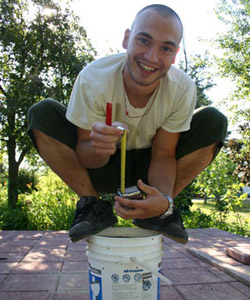 Now my Dharma practice has become my life. (Photo by Sravasti Abbey)

At about 14 years of age I decided that religion was a crock. I spent much time going over all of the holes in the various Christian denominations. There were so many contradictions that I figured the whole thing must be a glorified fairy tale. This seemed to be very empowering at first, to know that everyone was wrong and I was right—that we were all just flying around on this huge rock, no purpose, no goal except our own happiness.

Quickly this feeling began to fade. I soon realized that I didn’t know how to make myself happy. There were careers, soul mates, lovers, beautiful women, children, new cars, big houses, fame and fortune. But for some reason these things didn’t appeal to me. I have had new toys, but the excitement fades and they get lost in the back of the closet.

Women were becoming more important to me. It seemed that true happiness was a wife who loves you unconditionally and 2.5 kids that never cause trouble at school. After trying out a few love interests I learned posthaste that what you see in the movies wasn’t quite an accurate portrayal of real life.

So, there I was, the only one who could make me happy and no idea how to do it. I began to envy those with spirituality. They were so lucky to be so dumb; ignorance is bliss. After a few years I got a bit depressed and started using drugs as a sort of limbo. Something to pass the time while I floated down the stream of life. I spent most of my time watching movies and wishing I could be a monk, ninja or samurai warrior: anything to have a true purpose. Eventually I came across some Buddhist teachings and truly believed in what they had to say. Maybe not everything, but I seemed to identify with the way of thinking.

By this time I was smoking so much pot I couldn’t get the wherewithal to do what I truly wanted. What I gained in creativity, I lost in motivation. This went on for a couple of years. Women coming and going, true love, not so true love, none of them lasting long, all of them leaving an empty feeling in my stomach.

Eventually I got arrested and was sent to prison. By this time I was so bored and eager for a change that I actually wanted to go. One short year and I knew it would change my whole life. This is where I really started to learn and practice Buddhism. It was a chance to turn inward and focus my mind. It started slowly: meeting like-minded people, finding the time and energy to practice. But the ball was rolling, and it could only accelerate, unless I chose to stop it.

Now my Dharma practice has become my life. I work at a Buddhist abbey, and spend five days each week there. I wish I never had to leave. The empty feeling I had when I thought about how alone I was is now overcome by the realization of how much I rely on others. Now I know that religion is not about gods and demons, nor is it for the ignorant. It is about finding your path. It is about finding peace.

Karma, confusion and clarity
A Christmas gift in prison