I have been observing how certain Buddhist practitioners act, specifically a Tibetan nun, a Zen priest and a Zen Dharma teacher as well as a man who is an acupuncturist and Buddhist. Each of these persons is my friend and teacher, and I am sure very close to Buddhahood. Each is different in personality, approach and technique of teaching. However, there is one theme, one connecting thread that sticks out in each one of them that points to the authenticity of their Buddha nature. That thread is their unselfish, consistent and often painful (for them) devotion to others.

Recently my Dharma teacher and good friend Dr. Jerry Braza came in to visit me, and he looked out of balance. His brow was all squinched up, his eyes tight and red. I could tell he was a little tired and uncomfortable. I came to find out he had very little sleep the night before, yet he’d still gotten up early to come visit me.

Later that week I received a letter from a friend of mine who is a healer and acupuncturist who travels one and a half hours to work and then another one and half back at night in order to treat others and support his family. On top of this sacrifice, as if that’s not enough, he writes to me at the end of his evening and not once did he complain of his tiredness or sacrifice to stay up and write and school me in my study of meridian points (energy areas of the body) and healing!

To really emphasize my point: I received a letter from Venerable Thubten Chodron who had been teaching overseas tirelessly and her “body of thought” in the letter was the wonder of the Dharma and her perception of my growth compared to a few years earlier.

But the most eye-opening and heartwarming look at the Buddha qualities in us mere mortals was the telling of a prisoner who, relatively poor in material possessions, managed to accumulate some goodies like candy over the holidays and went to the yard on Christmas and handed it out to whomever he had contact with. Later, one of the people to whom he gave it told him that the candy was the only gift he received!

To me, this is a powerful showing of the message the Buddha conveyed in his teachings—to overcome our own suffering we must help others in their suffering. We must do it with joyous effort, cherishing the happiness that others receive through their release from suffering. To me, the Buddha shines in all these people as they spread their compassion to me and to others, and I aspire to touch that part in myself and share it with others. I bow to you Buddhas with many thanks! 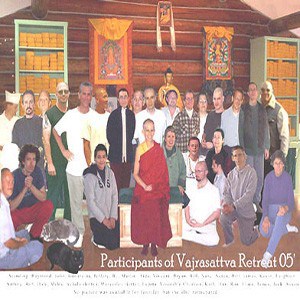 Questions about initiation and meditation