On September 4, 2003, Venerable Thubten Chodron and I traveled down Interstate 5 to Salem, Oregon, to visit the Buddhist group in Oregon State Prison (OSP). Our liaison to the prison, Karuna Thompson, one of the prison chaplains, informed us that one incarcerated person had murdered another just a day or so before and that the men had all been in lock-down ever since. She informed us that activities such as our visit were just restored to the men. So, we arrived at OSP wondering how this terrible event had affected the men. The waiting room was packed with family members who went one at a time through the metal detector to get a short visit. One teen girl had worn jeans with many zippers and could not get through and was denied her visit.

Once again, Father Jacobsen the Jesuit priest chaplain escorted us in. We passed through two security points, with ID checks, hand stamps etc. and then climbed two flights of grey concrete steps. We passed the prison library and entered the chapel. A few men greeted us and set up a small altar and arranged the pews into an L shape. Then the others trickled in: some grey haired, one Asian, one African heritage, young, tall, short, hefty and slender. We greeted, gathered quietly together and then Venerable led these eight men in prostrations. Most of them said they had never prostrated before. Most of the men went to the floor, honoring the Buddha, Dharma and Sangha in their blue prison jeans and shirts stamped with the word “inmate” on their backs. I don’t think I will ever forget the sight of this group of men engaged in this simple, but profound act of humility and purification.

After a short meditation, Venerable opened up to questions. The range was far and wide: several men talked about how much the Dharma means to them; how it evens out their responses to the daily provocations they experience at OSP. One described that in dangerous or tense times armed guards with masks are posted on the prison rooftops with guns leveled at them as they have time in the yard. Venerable asked them how the murder was affecting them.

Of course, there had been no time in the yard for several days—and it was hot, in the 90s. They were grateful just to be out of their hot cells. One man said that he had played chess sometimes with the victim. He said the man wanted to improve, but, “just didn’t have the talent to do it.” Everyone was quiet. Suddenly I could see the humanity of the murder victim. He was a man, he played chess, he wanted better. As the Dalai Lama always reminds us, we all want happiness. As we prepared to leave the chapel, I glanced down at the pew I had been sitting in. A swastika was carved in the wood. Prison. It’s a hard hard place to live; full of blatant hate, fear and even murder. And yet these eight men showed up to study Dharma and to purify their karma by prostrating and meditating. They have a Buddhist community. And hope. 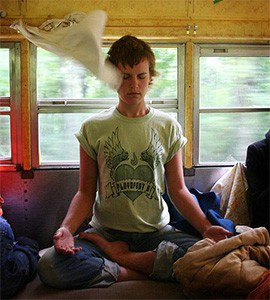