You are here: Home > Following in the Buddha’s Footsteps 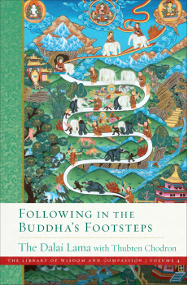 The fourth volume of the Dalai Lama’s definitive series on the path to awakening, Following in the Buddha’s Footsteps delves into the substance of spiritual practice. You’ll first hear His Holiness’s explanation of the Buddha, Dharma, and Sangha, why they are reliable guides on the path, and how to relate to them. His Holiness then describes the three essential trainings common to all Buddhist traditions: the higher trainings in ethical conduct, concentration, and wisdom. The chapters on ethical conduct show us how to live a life free of harm to self or others. Chapters on concentration give us detailed instructions on how to develop single-pointed concentration as well as the higher states of concentration available to an earnest practitioner. The chapters on wisdom contain in-depth teachings on the noble eightfold path and the four establishments of mindfulness for developing greater awareness and understanding of our body, feelings, mind, and other phenomena. Together, these topics form the core of Buddhist practice.

This is a book to treasure and refer to repeatedly as you begin the path, progress on it, and near the final goal of nirvana.

The Library of Wisdom and Compassion is a special multi-volume series in which His Holiness the Dalai Lama shares the Buddha’s teachings on the complete path to full awakening that he himself has practiced his entire life. The topics are arranged especially for people not born in a Buddhist culture and are peppered with the Dalai Lama’s own unique outlook. Coauthored by one of his long-standing Western disciples, the American nun Thubten Chodron, each book can be enjoyed on its own or read as the logical next step in the series.

His Holiness the Dalai Lama and Ven. Thubten Chodron continue to give generously to the Buddhist community, and in particular to the community of Western Buddhist practitioners. This fourth volume in the magnificent Library of Wisdom and Compassion maintains the high standards set in the first three: it is comprehensive without sacrificing relevant detail, it is precise without sacrificing accessibility, it is of enormous value to practitioners and teachers but still of great interest to scholars of Buddhism.
—Jay L. Garfield, Doris Silbert Professor in the Humanities, Smith College and the Harvard Divinity School

This authoritative volume serves as a rich source of information on two major themes—the bases of Buddhist faith and the framework of Buddhist training—each viewed from the two complementary perspectives of the Pali tradition and the Indo-Tibetan tradition.
—Bhikkhu Bodhi, scholar-monk and translator of Pali texts

If we were to set off on a trek across the mighty Himalaya for a month or two, we would spend plenty of time, perhaps years in advance, to prepare for such a journey. We would list all of the essential items we might need to bring along, where we wanted to travel, and which route would be the best to follow. Most important, we would locate an excellent guide who knew the terrain and could lead us safely along the path.

How much more so when we set off on our sacred journey to explore and develop our mind’s highest potential: enlightenment. We need to be even more diligent in our preparations for this journey, and most important, we certainly need a qualified guide who has discovered a qualified path that leads us exactly to the correct destination, without unplanned-for meanderings, getting lost in the vast terrain.

Following in the Buddha’s Footsteps clearly lays out how to take the journey to explore and develop our mind’s highest potential, following the Buddha as the unmistaken qualified guide who discovered the unmistaken qualified path all the way up to the final destination: enlightenment. The chapters in this book are logical, historically accurate, in-depth instructions and directions on how to skillfully and diligently create a meaningful Dharma practice. Especially helpful will be the chapters on mindfulness, establishing this contemporary practice in its rightful historical function within traditional Buddhist meditation techniques.

It is written by two qualified guides, Bhikṣu Tenzin Gyatso, the Fourteenth Dalai Lama, and Bhikṣuṇī Thubten Chodron, who themselves have been trodding the path for several decades (and several lifetimes too!), according to the Buddha’s clear teachings. Therefore the reader can be assured that the thorough contents, historical referencing, and easy-to-follow significant and detailed instructions will be of great benefit to help progress in one’s practice. It is with heartfelt gratitude for the work undertaken and included herein that I happily recommend this volume, with the wish that all beings may benefit.”
—Bhikṣuṇī Jetsunma Tenzin Palmo