A group of rabbis and Jewish leaders met with His Holiness the Dalai Lama and various Tibetans in Dharamsala for inter-religious discussion. This visit was the inspiration for a popular book, The Jew in the Lotus by Rodger Kamenetz, which recounts the meeting and explores the histories and commonalities of Judaism and Buddhism. 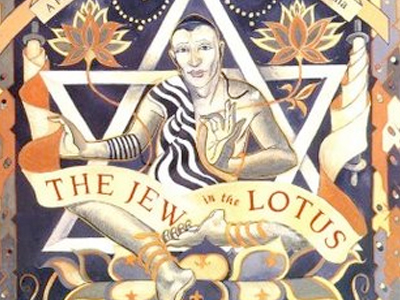 The Jew in the Lotus explores the histories and commonalities of Judaism and Buddhism.

I was living and studying in Dharamsala, India, in 1990, when a group of rabbis and Jewish leaders (mostly from USA, one from Israel) came for inter-religious discussion with His Holiness the Dalai Lama and various Tibetans. As a JuBu (Jewish Buddhist), I was interested in their visit and spent as much time with them as I could during their brief stay. The Jews’ talks with His Holiness weren’t open to the public, but I heard they went very well. The Jews were affected by His Holiness’ presence, humor and sincere interest. From his side, His Holiness appreciated the Jews’ energy and commitment to their faith. He even mentioned the other day that he liked the Jewish idea of human responsibility: God created the world, but humans are responsible for improving the situation on earth. People can’t wait for God to do everything. We have to do something to help others.

I attended many other activities with the rabbis. First was Sabbath dinner, to which they invited the older geshes and lamas. There was a lot of joy and festivity as they welcomed in the Sabbath: the Jewish men faced Jerusalem — which, from India, was westward, towards the setting sun. They danced and sang, while the geshes sat there. Later, one of the lamas told me that since the Jews were facing the sun when they danced, they thought they were worshipping the sun! Though I laughed when hearing this, it pointed out that we should never presuppose we understand what others are doing. Clearly dialogue is needed!

The lamas loosened up later during the after-dinner discussions. In the group I was in, talk centered around how to keep a culture together while in exile, as both the Jews and the Tibetans have this in common. The Jews described their educational system – Jewish schools, Sunday schools, after-school activities – and the importance of taking care of the youth as a means to transmit the cultural heritage. This is very important for the Tibetan community to do as so many of their youth know very little about Tibetan culture and religion. Many youths love blue jeans and rock music and would like to go to the West to earn a good living. Although the Tibetan community has done remarkable things such as establishing the Tibetan Children’s Villages, a lot more needs to be done if the culture and religion are going to continue for a long time. Since Tibetan culture and Buddhism are being suppressed in their own land, it’s up to the exile community to keep them intact.

Several JuBus were at the Sabbath dinner and for us the service, singing, and prayers were like a flashback. I would hear different melodies and think, “Oh, I remember that.” Alex Berzin even recalled the words of many prayers. “It’s amazing what you remember from when you were eleven years old!” he said.

The next morning informal discussions between the Jews and Western Buddhists occurred in the garden. The conversation ranged from anger to meditation to what our parents said when we became Buddhist. Some of the rabbis were in the Jewish mystical tradition and did meditation, which interested the Buddhists very much.

Initially, I wasn’t sure how the Jews would react to so many Buddhists who grew up Jewish. One rabbi assured me that he respected my decision to become a Buddhist nun. In fact, as he did meditation from a Jewish perspective, he wanted to deepen it by learning meditation from the Buddhists. As a result, we met several times and I gave him some instructions on Buddhist meditation. The last day we meditated on the Eight Verses of Thought Training together with the visualization of light flowing into oneself and purifying selfishness and ignorance. After the meditation, he had an incredible look on his face: the meditation had touched something very deep within him.

One of the Jews later commented to HHDL about his sorrow in seeing so many Jews become Buddhist. His Holiness the Dalai Lama responded that Buddhists don’t proselytize and that people have different dispositions and so must find a religion fitting for them. He also told them that if they keep their meditative and mystical traditions hidden away, they will lose people who are inclined towards those practices to other religions.

The Jews also met with young Tibetan scholars and leaders. This meeting was in English, which made communication much closer (with the geshes, everything had to be translated).

While the young Tibetans described the persecution of Tibetans by the Chinese communists and their personal experiences of Tibetan identity in exile, the Jews nodded their heads and tears came to their eyes. They understood so well the suffering of persecution, prejudice and trying to keep one’s cultural and religious identity while living in countries which had other cultures and religions. There was a sincere wish on the part of the Jews to aid the Tibetans.

The young Tibetans were also open about the obstacles they face not only from without, but from within the Tibetan community: the bureaucracy, the conservatism. I appreciated their honesty and their efforts.

This inter-religious and inter-cultural contact was enriching, and I wish our world had more of it. It would stop a lot of prejudice and hatred. When I go to the States next year, I’ll visit many of the Jews, and one rabbi even asked me to give a talk at his seminary!

My personal reaction to the Jewish-Tibetan dialogue was interesting. I came to see that I’m neither a Jew nor a Tibetan culturally, although I am a Buddhist. I understand the Jewish culture because I grew up in it and understand the Tibetan culture because I’ve lived many years in it. I’ve lived with Chinese also and feel at home with them. However, none of these are my cultural group. This has its advantages and disadvantages: everywhere I’ve lived in the world I’ve met kind people and have felt comfortable. On the other hand, no place is really home, with “my” people. I see good points and bad points in both Western and Asian cultures and values, and am somehow trying to incorporate the best of both into my personal life.

Read more about this historic dialogue: Judaism and Buddhism: What I learned from the Dalai Lama, by Rodger Kamenetz