You are here: Home > Practical Buddhism > Prison Dharma > By Incarcerated People > On Self-Worth > Letting go of guilt and shame
By L. B. on Aug 1, 2007 in On Self-Worth

How many of us find ourselves buried in guilt and shame because of the hurt and harm we have caused others in the past? I will bet most if not all of us at one time or another have. 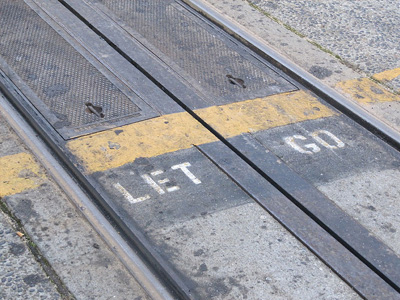 We become immobilized mentally when we dwell on guilt and shame. (Photo by Mr. Littlehand)

For those of us who have spent a lifetime causing others pain, guilt and shame can come crashing down on us like a five-ton weight and flatten us like a bloody pancake. We become immobilized mentally and we walk around utterly useless when we dwell on guilt and shame to obsession.

Sometimes I will be doing some task, just going along with my day and I will have a flash of robbing someone of their money, and such a wave of guilt and shame will rise up that it literally makes me sick to my stomach for a little while. These feelings and thoughts that surround guilt and shame can become like a merry-go-round that we get stuck on and go round and round. Guilty memories and thoughts of “I’m no good” just build up momentum and keep these negative thoughts and feelings going in our daily lives. They get to a point where they feed on each other and the cycle of hurt and pain continues on and on.

When I was a teenager I would get drunk and assault someone, then I would sober up and realize what I had done and then start drinking again to deal with the guilt and shame. Once I was drunk I would look for someone else to hurt to make myself feel superior. But that superiority only lasted until the next guilty thought, and I would feel like a useless ass and the cycle would start all over again.

Personally I do not believe we have to be under the influence of drugs or alcohol to get caught up in this cycle of abuse that starts with our own thinking of worthlessness and moves outward until it encompasses every facet of our lives eventually destroying all of those around us and even ourselves.

When I was a child my guilt and shame started when I was constantly told that I was useless and good for nothing. When you tell a six year-old child something, especially if the one doing the telling is a grownup they admire, they tend to believe what they are told. Once a child believes he is useless or no good, he will act that out in his daily life.

As I got older the drugs and alcohol were used as a poor coping mechanism to deal with the guilt and shame I had built up since childhood. Eventually I was good for nothing, very selfish and in need of locking up!

Once in prison the guilt can come crashing down like never before. For most of us this is because we can not dull our senses with alcohol and drugs, and we sober up to the reality of all the harm and havoc we have heaped on others. If we let these thoughts of guilt and shame continue to invade our daily lives and we don’t deal with them they can destroy us.

So how do we deal with them in a healthy way that helps us heal and get rid of the guilt and shame and start to lead a life that is positive and productive? First we must look at what guilt and shame really are.

Guilt is an emotion that comes up around thoughts of the hurt and pain that we cause others. Guilt is also the ego’s way of saying, “Look at all of the bad things I have done. I am no good (enter shame) and I don’t deserve any happiness.” Guilt is a pity party, a way for the illusion that we call ego to stay alive. If we focus on the guilty feelings and shameful thoughts, we are focused on the self, and we are not dealing with the problem in a straightforward manner. So we have guilt reminding us of all the wrong deeds we have done, and shame telling us we are bad. These two emotions keep us in a cycle of thoughts and feelings that keeps us acting out on others and ourselves in a totally negative way, and we build negative karma that keeps us in a suffering state.

What can we do? Sharon Salzberg, a Buddhist author, wrote “The practice of metta (showing loving-kindness to all sentient beings), uncovering the force of love that can uproot fear and anger and guilt, begins with befriending ourselves. The foundation of metta practice is to know how to be our own friend. According to the Buddha, you can search throughout the entire universe for someone who is more deserving of your love and affection than you are yourself, and that person is to be found nowhere. You yourself, as much as anybody in the entire universe deserve your love and affection.” How few of us embrace ourselves in this way.

With metta practice we uncover the possibility of truly loving ourselves. We discover that, as Walt Whitman put it, “I am larger and better than I thought. I did not think that I had so much goodness!”

So we start by loving ourselves. We look inward and see that we are in need of loving-kindness ourselves and that we need to let go of the guilt over our past wrong deeds and realize that we are not bad. We did bad things and regret them and vow not to repeat them, but we are not bad. That helps us let go of the shame and we can start to respect ourselves and show ourselves love. Then we can start caring about others and showing them loving kindness. As we start growing in loving kindness towards all sentient beings, we can start doing good things for others and start covering over all the bad we have done.

The Buddha said, “Whoever has done harmful actions but later covers them up with good is like the moon which, freed from clouds, lights up the world.”

So we take the unskilled focus off of ourselves by realizing that guilt and shame are negative emotions surrounded by negative thoughts that continue to feed our ego in a negative way. It keeps that ego, that sense of “I” alive, and it does not allow us to focus on anything positive.

Once we let go of guilt and shame we can focus on ourselves in a skillful way that does not feed the ego, but rather heals our minds by way of opening up to loving-kindness, first to ourselves and then outwards toward all sentient beings. Once we have learned to love ourselves, the illusion of us being separate from others diminishes and the growth we get from giving that loving-kindness to others allows us to see how we are interconnected to all sentient beings. This will bring us peace and free us from guilt and shame.