The significance of the kathina ceremony

The significance of the kathina ceremony

A talk given during Sravasti Abbey’s monthly Sharing the Dharma Day.

Today we’re combining Sharing the Dharma Day with a special ceremony—the kathina ceremony—that is the culmination of something that we were actually celebrating the last Sharing the Dharma Day. It’s something that’s so rare in North America that I think it’s important to talk about a little bit. You’ll be hearing about it throughout the day, but to give a framework, or context, for what this kathina “thing” is about I think may be helpful.

During the Buddha’s time—in the beginning—the monastics (especially the monks) lived under trees, they didn’t have homes, they wandered, that was part of being the mendicant life. As there came to be more and more of them lay people began to offer parks and places where they could stay for a while. Then as nuns began to be ordained they weren’t allowed to wander because it wasn’t safe for women to live in that way, so more and more communities were formed.

As you know, the Buddha was teaching in India where there is a famous monsoon season of three months of torrential rain (and I understand “torrential” is an understatement). I haven’t experienced them myself but it’s like sheets, and sheets, and sheets of rain that go on for months. During the Buddha’s time some of the lay people came to him and said, “You know, the Jains (that other order), those people during the rainy season, they stay put. They don’t walk around. But your monks are out walking around stepping on the bugs and stuff. Why is that?” So, as the Buddha did in many ways, when the lay people came to complain about the behavior of the monastics, he set up a regulation. That’s how the “rains retreats” became established. It was a three-month time when monastics stay in one place and spend time focusing on Dharma study, meditation, and also instruction. It’s not so much a silent meditation retreat, which is kind of a different kind of thing, but it’s a time of really focusing on the Dharma and to take advantage of the weather.

At the end of that retreat comes a period that’s called the pavarana, because during that period of time, with all these people staying together closely, one of the guidelines is to not admonish one another for our behavior, in order to promote harmony. It’s a very helpful practice, actually. At the end of that retreat we take an opportunity then to invite feedback from others: “Please give me anything that you’ve seen, heard, or suspected, I want to hear feedback about my behavior.” It’s in order to grow in the Dharma, not because I want people to criticize me, why would I do that? But I want to invite the feedback that give me information about something I may not know, or I may not understand about myself. I may not realize my impact on the people that I live with. So please give me that kindly, compassionately.

The pavarana is a ceremony that has now been passed down for almost 2,600 years. At the end of that period the story goes (the short version) that some monks were trying to get to the Buddha to do their rains retreat with him and the weather was so bad that they didn’t make it. So (there were 30 of them) they just set up camp wherever they were and they had a very nice rains retreat. As soon as it was over they went—not much further actually, they had almost made it to the Buddha but they didn’t quite make it—they went to see him. The roads were still muddy, their clothes were drenched and torn and bedraggled, and they were really pathetic. The Buddha asked them, “How was your retreat? And they said, “It was lovely.” He said, “Did you have enough to eat?” “Yes we did.” Then he noticed that they had bad robes and someone had offered cloth to him to make robes, so he said, “I’d like to offer this to you.” That began this kathina period.

The reason that’s significant is that part of the guidelines for monastics is that we do not buy things. We’re completely dependent on lay people—the kindness of lay people—for everything. By living on the kindness of others to receive the four requisites of food, clothing, medicine, and shelter you can’t just go, “Well, my robe’s dirty I’m going to run down to Nordstrom’s and see what I can find.” You just live with it. You just live with it. In setting up the kathina what the Buddha established was a situation whereby lay people could make offerings to replenish the supplies and take care of the sangha after this long retreat. Everybody was gathered there, they were all present. If there were supplies that were at that place they were pretty much used up after the group had been living there for three months, so that became a ritual that’s still done in Southeast Asia.

These two—this rains retreat and this pavarana ceremony that happens that the end—are two of the three monastic rites that the Buddha prescribed for a fully functioning sangha community. The other one is a bi-monthly confession and restoration ceremony whereby the monastics come together, confess any transgressions of their precepts, and those precepts are restored. So every two weeks there’s a ceremony where we come together and check in: “This is one I transgressed.” Minor ones. Major ones then you’re no longer part of the sangha. But the minor ones we also confess. And then those precepts are restored. It keeps us current in our ethical conduct. And also, because of the revelation, really (within our community, what I see, anyway) is by being open about our faults and our downfalls we support each other to continue to grow.

These three practices then, this posadah (this bi-monthly confession), the annual varsa (or rains retreat), and the pavarana, are the three rituals (or rites) that mark a fully functioning sangha community. This is a little arcane because outside the monastery doors who knows this is happening? Nobody. But it’s important to know that it’s happening, because in North America there are very few, places that are actually performing these rituals, that have the conditions to perform the rituals. One condition is you have to have fully ordained monastics. I won’t go into the details of it but as you may know, in the Tibetan tradition the full ordination for women actually never made it into Tibet, so to receive full ordination as a woman in the Tibetan tradition you actually have to go to the Chinese tradition where there is still a bhikṣuṇī (or fully ordained nun) sangha to receive that ordination. We have here ten fully ordained nuns. I’m fairly certain that…. I don’t know if there is another one with that many in North America. Maybe in the larger Chinese monasteries. But this is extremely rare. Then, to have a community that’s doing all three of the rites (or rituals), extremely rare. Even in Asian countries it’s not so easy for all these, even very large monasteries, to do all these rituals together anymore. So there’s a way of carrying and preserving the Buddha’s teachings throughout all these many, many years that we’re so fortunate that we have the conditions to do that.

Why is that important to you? Because since the beginning, since the Buddha’s time, the people most entrusted in carrying on the teachings has been the monastic community. Why? Because that’s our way of life. Lay practitioners can study, and there are many, many very realized lay practitioners, many Buddhist scholars, but to actually live the Dharma day in, day out, and carry on the tradition, try to study it, embody it, and keep the ethical guidelines that the Buddha laid down for the monastic community is what historically has been what kept the seed of the Buddha’s teachings going, through all these (now) millennia, on and on, so that here, outside of Spokane, Washington, up in the hills, in little Pend Oreille County, there is a little place on the hill where people are practicing the Dharma in that way is kind of a miracle.

Now, we don’t have miracles in Buddhism, I’m borrowing from a different tradition. But it’s amazing that the causes and conditions have come together, and it’s important to know that you are part of that condition. If there is no support from the lay people the sangha cannot live. Or, the sangha has to compromise how they live. There are places where monastics go out and get jobs in order to try to keep their precepts. There are places where monastics are extremely poor and hardly getting by if they are trying to keep their precepts. Our culture isn’t… Who knows what to do with a Buddhist monastic? Our culture isn’t made for that, really. People are doing amazing things to try to keep their precepts and hold their ordination within the confines of this culture. Here, however, due to the kind support that we have and also the wisdom of our teacher in founding the Abbey in the way that she has, we have these kinds of conditions where this mutual relationship between the lay people and the sangha can really be lived. So it’s important that we all know what’s happening.

In Southeast Asia the kathina ceremony is a big deal. They have huge festivals where they say there are processions where there are even live elephants that lead the way. We don’t have an elephant, but our friends did make us a “moose” sign that you’ll see today, so it’s like a moose leading the procession. But it’s a big celebration.

This is our third annual. It’s growing. I want to appreciate Tracy who has the skill, the tenacity, the sensitivity to the needs of the sangha to be able to check and ask, “What do you guys need?” Because we can’t call you up and say, “You know? I really need a pair of shoes.” We can’t do that and that’s what today’s talk is about, how and why and what that means. So people have brought offerings… People brought lunch today. It’s amazing. That people came today is a part of the exchange. I think it’s very important that we get that today is a special day. It’s Sharing the Dharma Day, which is special in itself. But there’s a bigger picture today that we’re working with. And thank you very much for being part of it. 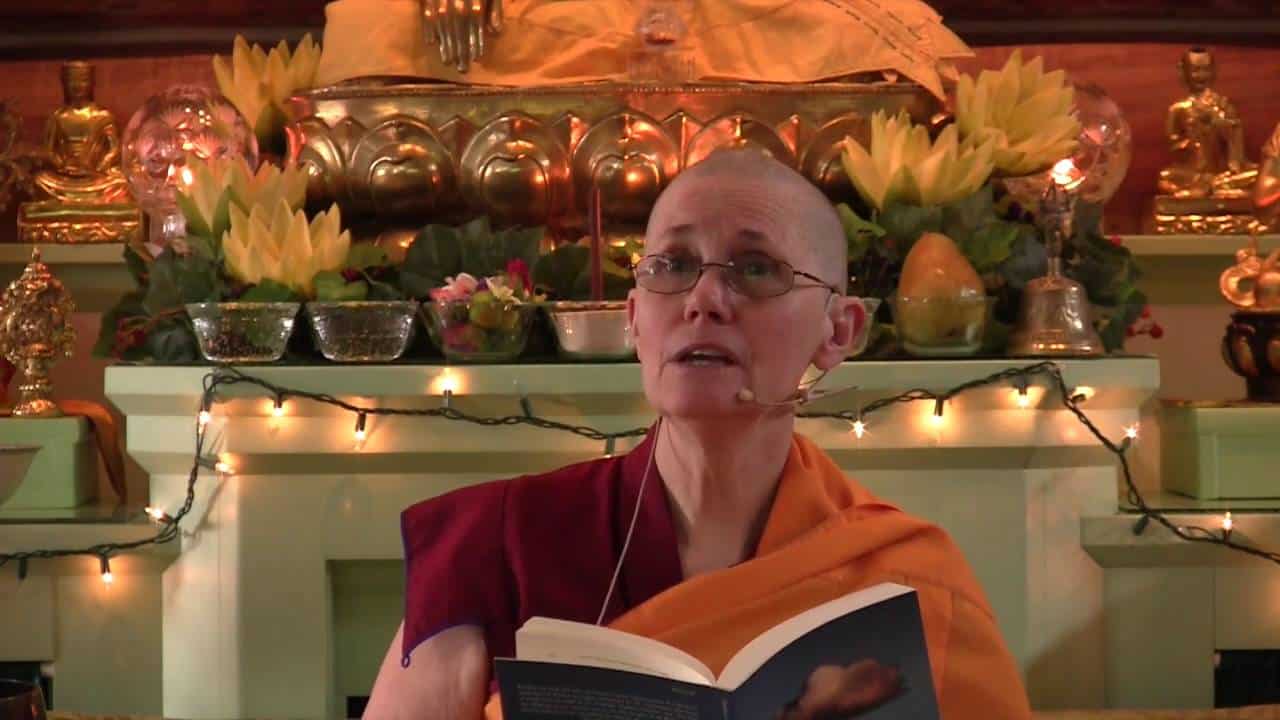 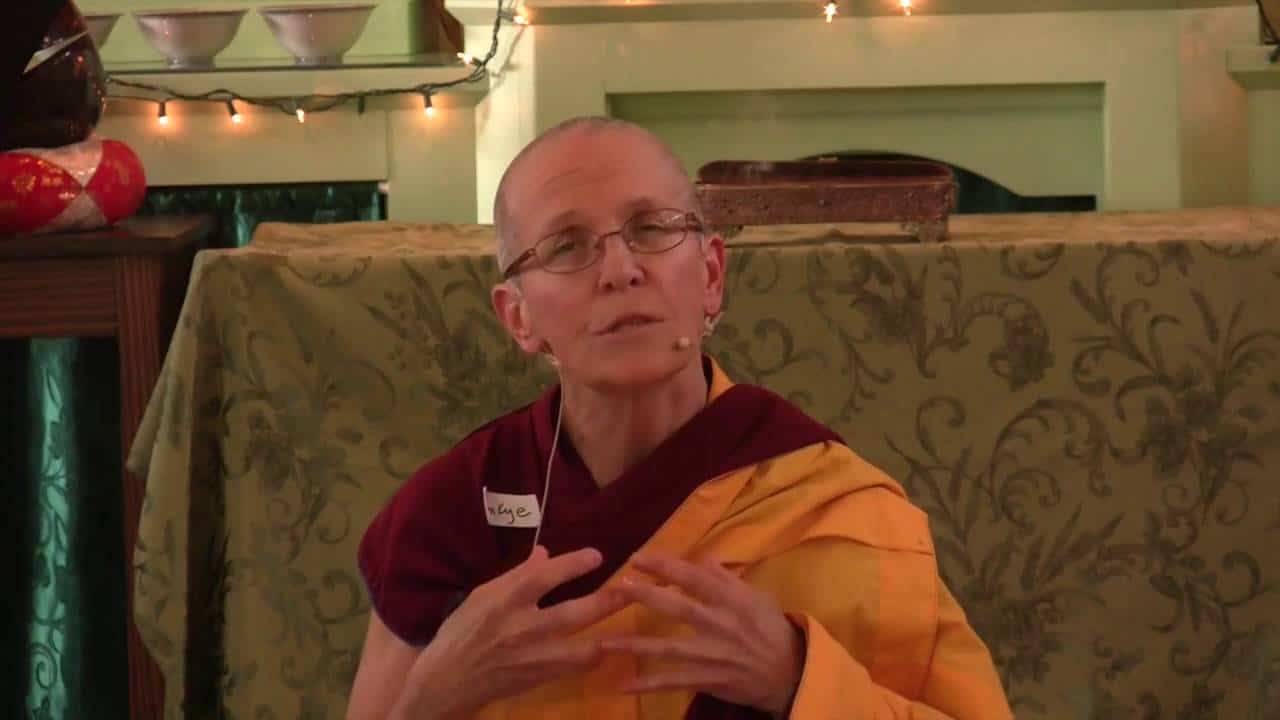 Bringing the kathina ceremony to the West