This article was originally published in The Times of India as Life is like sowing seeds, not in our control. 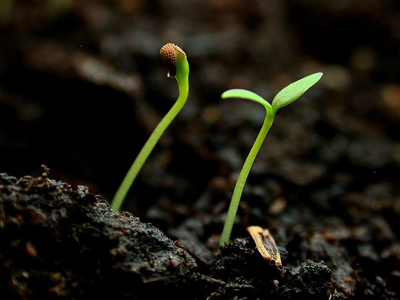 “Life is like sprinkling seeds. You don’t know which ones will blossom into beautiful flowers, as their growth depends on factors like soil and water. That’s beyond one’s control.”

Succinct and profound, the words of Bhikshuni Thubten Chodron effectively summed up the dichotomy between human efforts and reality.

A Chicago-born history teacher who got ordained as a Buddhist nun in 1975, Chodron is popular for her practical explanations on applying Buddhist teachings in daily life. In Bengaluru on Tuesday, she spoke on `dealing with situations when they fall apart’.

At the talk organized by The Garden of Samadhi Mind Centre, Chodron, 65, shared instances from her own life.” Over 18 years ago, I had a student who had potential and I was trying to help him learn more. My other students organized a party on my birthday and this particular student didn’t show up. Instead, he sent me a letter that shocked me. He said ‘he is stepping back, doesn’t want to attend classes and wants to think for himself’. This message hit me like the tsunami. It made me lose confidence as a teacher. But I learnt a lesson—that I cannot control anyone else. We see potential in people but they may not see it themselves. When you encourage them, they think you are pushing them,” Chodron said. 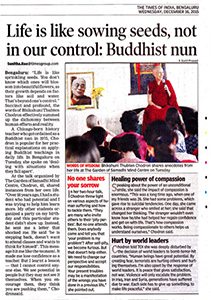 No one shares your sorrow

In her two-hour talk, Chodron threw light on various aspects of human suffering and how to tackle them. “They are many who invite others to their ‘pity parties’. But no one attends them. Does anybody come and tell you that ‘your problem is my problem’? After self-pity, we become furious. But that doesn’t help either.We need to change our perspective and accept our responsibilities. Your present troubles may be a manifestation of the wrongs you have done in a previous life,” she pointed out.

Speaking about the power of an unconditional smile, she said the impact of compassion is enormous. “This was a long time ago, when one of my friends was 26. She had some problems, which gave rise to suicidal tendencies. One day, she came across a stranger who smiled at her; she said that changed her thinking. The stranger wouldn’t even know how he she had helped her regain confidence and get on with life. That’s how compassion works. Being compassionate to others helps us understand ourselves,” Chodron said.

Chodron told TOI she was deeply disturbed by the decision of world leaders to bomb terror-hit countries. “Human beings have great potential. By creating fear, terrorists are hurting others and hurting themselves. I’m also upset by the response of world leaders. It is peace that gives satisfaction, not war. Violence will only escalate the problem. In Iraq, Iran and Syria, generations have suffered due to war. Each side has to give up something, to make life peaceful,” she said.