It was a moment of insight, of realization. Maybe I’m just more open to such moments now; those brief, simple occurrences in life that at first appear so insignificant, but then, ZAP, something hits you, something suddenly makes sense, or at least becomes clearer to you.

I was sitting in my bunk reading Tricycle, a Buddhist magazine, preparing to meditate. My two cellies were both in the TV room so I had the whole cube to myself, all 80 square feet of it. The overhead lights had been dimmed, so the only light in the Cadre housing unit was the fluorescent lights in each of the 62 cubes.

Three Muslims walked down to the end of the aisle outside my cube and laid out their prayer rugs in preparation for evening prayers. I watched as they stood, hands folded, softly chanting in unity before prostrating. Across the aisle, my friend JD was kneeling by his bunk, his Bible on the bed beside him saying his evening prayers. I marveled at the surreal, serene scene. Here, within a span of fifteen feet were five convicted felons, to many, dregs of society practicing their spirituality with reverence, tolerance, and harmony. So many thoughts came to my mind.

I thought of the talk radio show I had listened to the previous evening a “discussion” between a Mormon and a Christian evangelist about whether or not Mormons believed in Jesus. While the Mormon was very tolerant of the other’s beliefs, the Christian evangelist was a raving, ranting maniac, constantly yelling that Mormons were Satan worshipers destined for hell. So much intolerance and hate.

I thought about the newscast I had just heard on NPR concerning Palestinians and Israelis fighting in Gaza; battling over holy land and differing beliefs.

Of course, I thought of 9/11 and Iraq; of Muslim fundamentalists and Christian fundamentalists. More intolerance and hate. People so rigidly attached to dogma, their minds obscured by ignorance, pushing their beliefs onto others, insisting only they are right; everyone else is just plain wrong.

I thought of the current political and religious climate in our country, where over-zealous politicians desiring re-election unite with well-intentioned but dogmatic citizens to blur the line between church and state. At times, our society seems to be regressing back to the days of public pillories, banned books, and scarlet letters.

The Buddha always cautioned his followers to not just take his word for what he was teaching, but to try it for themselves, if it didn’t work, find something that did. The Dalai Lama has said Buddhism isn’t for everyone; and when asked what Buddhism would do if science suddenly refuted a Buddhist belief, he said, “We’d have to adjust our thinking.” Wow! I admire such openness, such nonattachment. Buddhists understand and accept that there are many paths to liberation. Buddhism happens to work for them, but may not for others. That’s okay! Buddhism is all about being tolerant and truly desiring that others find happiness. 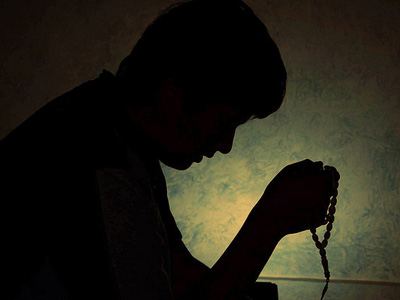 There was no screaming that the other group was wrong; no degradation of someone else’s beliefs. We all practice in harmony. (Photo by Muhammad Rehan)

There are 15 different religions officially practiced here by approximately 900 inmates. There are no shouting matches between Muslims and Christians. We Buddhists have never thrown stones at the Native Americans’ sweat lodge. Last evening, in the main courtyard, I observed a group of Muslims studying the Koran while a Catholic Bible study was in progress just a few feet away. There was no screaming that the other group was wrong; no degradation of someone else’s beliefs. We all practice in harmony.

How does this happen, especially here? I think it has to do with respect. Respect is a big deal in prison, an ideal not just spoken about, but practiced. I also think that inmates so clearly understand suffering and every being’s quest for happiness. We understand it all so well it’s how we ended up here, because of our misguided efforts to end our suffering; because of our selfish, reckless pursuit of happiness. So, when we come across someone who’s on a true spiritual path, courageously striving to cease their suffering and find happiness, whether that path is Judaism, Hinduism or Rastafarian-ism, we respect their quest. If such tolerance, understanding, and acceptance is possible here, why is it not possible beyond the fences? As John Lennon once said, “Imagine… ”

A Christmas gift in prison
Things to think about