You are here: Home > Practical Buddhism > Prison Dharma > By Incarcerated People > On Addiction > Without a vodka bottle in my hand
By B. T. on Jan 29, 2006 in On Addiction

Like you said about the other inmate you know who will get out soon, my biggest problem will be to stay away from drugs and alcohol when I get out. Not so long ago, I think that was a major setback for me, but I really don’t think so anymore. I mean I know that I’m an addict. That won’t ever change I guess, but I really don’t have the desire to be high or drunk anymore. For a long time I would say that I won’t ever get drunk again, that I won’t use when I get out. But I was just saying that because it was logical, not because I really meant it. 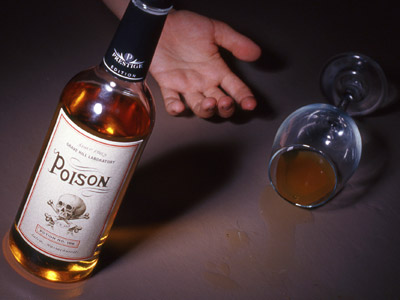 I want to live life now. I can’t do that with a vodka bottle in my hand. (Photo by Great Beyond)

I have not been high since ’99. Not drunk since ’98. I guess there are a lot of reasons that I don’t want that anymore. Part of it was that I drank to medicate my problems. Some of those problems I no longer have. Of course that doesn’t mean all my problems are gone, but I’m not so overwhelmed by them anymore. My self-esteem is markedly improved to begin with. I’m more patient and less angry. I am better equipped to deal with both the highs and lows of life.

In fact, I think that it is when things start going well that I should watch out the most. It’s kind of like the man who never goes to church but is lying on the bathroom floor throwing up drunk. He prays to God and swears he will never drink again if He’d just stop him from being sick. But the next day after the puke has been washed out of his hair and he has a little pep in his step, it’s easy to forget about his prayer by the toilet. When I’ve got my feet under me, it’s easy for me to think I’ve got all the answers. When I’m lying in the gutter, there is no doubt in my mind that I need some help.

The whole drinking and drugging scene used to be part of my identity. I no longer want to be seen that way. That’s not who I am anymore. Another thing is that I know, without any doubt, that if I get out of here and drink, I will come back. No question about it. Chodron, I’m done with this place! It’s not fun anymore.

I have a lot of regret for things that I did in my life, but the things that I regret the most are the things that never happened. Wasted opportunities. The person that I could have been and the people’s lives that I could have touched in a positive way. I regret having let so many people down, not because of things I did, but what I didn’t do. Those thoughts are sobering to me (no pun intended). I want to live life now. I can’t do that with a vodka bottle in my hand.

Many incarcerated people from all over the United States correspond with Venerable Chodron. They offer great insights into how they can be of benefit to themselves and others in even the most difficult of situations.
View all posts by Incarcerated people →
What are your non-negotiables?
Strong attachment to desire