J. H. and Venerable Thubten Chodron had been writing for several years and then many months went by when she didn’t hear from him. When he wrote, he explained why. Here are excerpts from his letter.

You are right, I have not written in quite some time. I will explain why. An analogy will work best here.

Several years ago, I came to you and my other kind teachers, complaining of an illness (suffering). I mentioned the symptoms, complained of the ones that bothered me the most. You guys listened well, with kindness on your faces. You suggested a treatment to me (the Dharma), your suggestions filled with your compassion. I responded like any child would when he went to the doctor. “What do you mean I have so and so?” “You want me to take what? That stuff tastes so icky!” “Now how much should I take, and when should I take it? Are you sure I should take it like that? I think I know better (smile).” On and on I’ve poked and prodded, questioned and even rebelled. As time went on, I grew up a little. As I listened to your advice, and sometimes followed it (smile), I started to get a bit healthier. Finally, it occurred to me that you guys are skilled physicians. The advice you gave me was sound, the diagnosis was true. The medicine you gave me was the best in the world, there is none other that could cure me like this stuff. So, it became time for me to stop questioning you, second guessing your advice, asking for directions to the pharmacy (not to mention how many times I asked if you had directions to a closer pharmacy, smile). It was time to stop asking all the questions and just go home, bundle up, settle in, and take my medicine.

Now, don’t get me wrong, I still balk at the bitter taste (it’s only bitter because I’m accustomed to the taste of things that are bad for me). I’m still not a very good patient either. I don’t follow my medication schedule at all like I should; but I try.

That’s why you haven’t heard from me, Venerable Chodron. In all honesty, I’ve fallen deeply in love with the Dharma, and I’ve decided to cuddle up with it. In the analogy, I’ve decided that I will go home and take my medicine. If I get weird side-effects, I’ll call the doctor (my kind teachers). If things go as the doctor has said they should, no sense showing up at the office pestering him/her all the time. Instead, I’ll make my regular check-ups, and continue my treatment.

So, how’s this been working out for me? Stellar, my kind friend. I feel really good. Sure, I’m still a very poor Buddhist; but, that’s all right. Master Shantideva has taught us, nothing gets harder through habituation. So what if I’m a bad Buddhist, I’m getting better every day. The great part is that I’m not getting better at being a good outward Buddhist … my mind is getting better. That’s the point really, and it has been great.

Speaking of languages, let me tell you about the kindness of our librarian (so you can get your ten percent of the merit for rejoicing, smile!) I asked our librarian to consider placing a Sanskrit grammarian and dictionary on the quarterly book order. Well, she tried to find some, had some difficulty, and then eventually found, The Sanskrit Language, an Introductory Grammar and Reader, by Walter Harding Maurer. I don’t even want to mention what it cost; but, it is enough to say that I would have never had access to such excellent materials had it not been for her kindness.

This is all going somewhere, Venerable Chodron. I’m not learning Tibetan and Sanskrit so that I can say, “Oh, look at me, I’m mister know-it-all.” It’s because I’ve made a decision. At first, this all started with, “I’d like to be able to read the texts that are not translated yet.” Then, it was, “I’d like to read the 100,000 verses on the Perfection of Wisdom.” After all, I’ve read the 18,000 verses. But the translator of that text said something that really bothered me. He said that it would be unlikely, in the next 20 years, that anyone would attempt to translate the 18,000 verses again. I said to myself, “What? What about the 100,000 verses?” Will I die before I read that? What about others?” 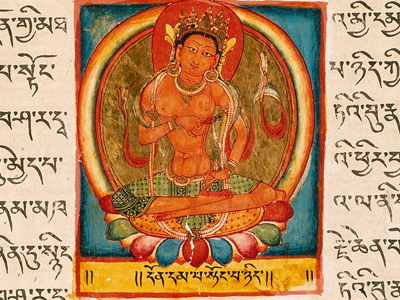 Folio from a Shatasahasrika Prajnaparamita (The Perfection of Wisdom in 100,000 Verses). (Photo by the Los Angeles County Museum of Art)

So it has become a life goal, I want to translate The Perfection of Wisdom in 100,000 Verses. I know, that’s kind of ambitious considering the fact that I don’t know either Sanskrit or Tibetan. So what, I’m not a Buddha yet either. Does that mean I can’t become one because I’m not one yet? Of course not. Same thing with the languages. Because I don’t know them, that doesn’t mean I can’t learn them. After all, I already have a classical literary Tibetan language primer, a Tibetan-English dictionary, and the Sanskrit grammarian. That, and I have a whole lot of time!

This brings me to my question concerning materials. Do you know where I could acquire a copy of this particular Perfection of Wisdom sutra? Preferably, I would like to find it both in Sanskrit and in Tibetan. It doesn’t really matter if it is a photocopy, or whatever. It just matters that the text is legible. I also need to find a Sanskrit-English dictionary (it doesn’t have to go from English to Sanskrit, as I only intend to translate one way.) If you don’t know of any place, please keep you ears open for me. Once I find out where to get it, I can seek the assistance of my friends and family to actually acquire it.

You might wonder if I have considered the magnitude of this task, and whether or not I have considered that I might not be able to accomplish such a task in this life. Of course I have. After much consideration, I have come to this conclusion: If I were to die in the midst of accomplishing this task, or maybe even before I had begun (who knows if we will wake up tomorrow, huh?), I am still better off for having tried. That is to say, the karmic propensity to make this holy scripture available to as many sentient beings as I can will stay with me, even if I don’t recall the language I learned in this life, or even the name of the sutra.

That’s something I’ve learned here. I’ve figured out why bodhisattvas can be patient, why three countless great eons doesn’t really matter. I’ve come to understand that it doesn’t matter whether or not I will die only once, or 100,000 times, before I become a Buddha. It doesn’t even matter if I will forget my name each and every time I die, as well as forget the name of every person I ever knew, and every book I ever read. In the end, the propensity for the truth grows ever stronger in me, the more I cultivate it. So, while I may lose the already ripened result of karma—this body, this name—I will not lose that immeasurable merit that comes from seeking the truth for the sake of all living beings. I will move ever closer, this life and the next. Such is the power of the truth, of interdependent origination.

With that I shall close. Please take care of yourself, and everyone you meet.

Preparing the mind for tonglen
Growing through the Dharma