You are here: Home > Practical Buddhism > Prison Dharma > By Incarcerated People > On Attachment > Prison of desire
By A. B. on Apr 9, 2004 in On Attachment

A. B., a veteran of the Vietnam War, served 20 years in a maximum security prison in southern Indiana. He was released in April 2003. An ordained priest in the Pure Land Buddhist tradition, he is currently in residence at Udumbara Sangha Zen Center in Evanston, Illinois. This article was reprinted with permission from Tricycle Magazine, Spring 2004

Every day of the 20 years I spent in prison for armed robbery, I heard the word freedom tossed about as if it were a prayer. For all of us convicts, it meant the same thing: to get out, to be back in the world. This wonderful notion of freedom—it occupied our days, our dreams, our fantasies. And for all that talk of freedom, few of us could see that we were in bondage long before we ever went to prison. Years of my life were spent in a prison of my own desires and aversions: I used drugs, alcohol, and relationships like they were aspirin. 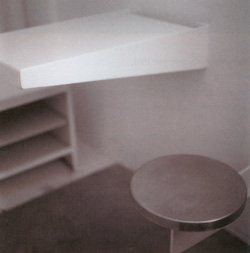 I resisted meditation practice because I didn’t want to be alone with myself. (Photo used with permission from Tricycle Magazine.)

I resisted meditation practice my first few years inside for the simple reason that I couldn’t be alone with myself. The pain of seeing what was in my heart was too great. I could navigate the world of prison much more easily than I could the cesspool of my own mind. The thoughts I had were of mayhem, violence, sex, drug relapses. In my mind I had murdered, raped, stolen, and maimed. I did not want to be alone with that person.

When years had passed and I finally summoned the courage to turn and face myself, I thought I could manipulate my mind. I would sit for hours and try to direct my thoughts away from the anguished memories of the past, the recriminations, the bitterness, and the violence. It didn’t dawn on me that I had no control over the arising of my thoughts. I was not thinking the thoughts; they were thinking themselves. When I realized this, I was profoundly relieved. The thoughts were not me, and whatever judgment I might make about them was totally unnecessary. My responsibility was only to sit with them, without motive, agenda, or intention.