An incarcerated person with whom Venerable Thubten Chodron was corresponding had just been transferred to one of the most violent state prisons in the country. He was in PC (protective custody), a special, restricted living situation that incarcerated people may request when they are threatened by another person or believe that another person or gang may attack them. To learn more about how incarcerated people deal with fear, Venerable Thubten Chodron asked him about his experience.

About the guy in the other state and how I cope with fear: First, I’ll qualify myself by saying that I’ve done time at every level from max to minimum. But other than being in some really bad county jails, I have never done “state time.” The Feds are a little different than the state prisons. The level of violence in the maximum security places in the state system is higher than in the federal max places.

I have been in two federal max joints and in the mediums too where there are killings, suicides, and beatings, stabbings, and all sorts of scandalous, depraved things going on. But the place that guy is in is a pretty hardcore spot. It’s like Folsom (CA), Huntsville (TX), Florence (AZ), Starheville (FL), or Stateville (IL). In those kinds of places, those incarcerated there basically run the prison. I don’t mean “run” in the sense that they tell the guards/cops what to do. I mean “run” in the sense that they have an established protocol with the staff and the staff leaves them to manage their own affairs (within reason) inside the walls.

Incarcerated people can keep a joint running smoothly or they make everything utter chaos. I’m sure in the prison this guy is in there is some form of this type of incarcerated person/staff détente (for lack of a better word). This man has already done 22 years, so his crime was of the most serious nature (obviously). He is in protective custody … that is a bad sign (bad thing totally!). That he is in PC in such a spot is a reflection of the seriousness of whatever he did many years ago. He either snitched/ratted on someone, killed someone (this carries a payback element with it), was convicted of a crime for which convicts administer vigilante justice, such as child-molesting (or worse) or rape. Since he mentioned not being able to stand up to a group, I’d say that he burned bridges in the past with one of the gangs. Maybe he killed one of their members or snitched one off. Whatever he did was serious enough to get him killed for it now (sometimes it doesn’t take much). He’s in a bad spot and he’ll probably have to stay in PC.

Now your question of how I have handled fear. The most honest answer I can say is, “I don’t know.” I have been very scared several times since getting busted. I’ve seen people get killed and stabbed. I’ve gotten into fights (three to be exact), and I’ve covered my homies’ backs. But I’ve never thought about how I handled the fear part of the equation. Like the old saying goes “there’s strength in numbers.” Whenever something was amiss, I had the support of other people (to use the proper prison slang, “my car”). “My car” (my friends/homies) always “had my back” (more slang), and I had theirs. In the maximum security prison (state or federal) being a lone-wolf (loner) is not the norm. There are some lone-wolves of course but not many. To be a man in PC in a max-joint is to be a “marked man.” Someone has an axe to grind with you, and whomever it is that has that “beef” with you probably has a pretty strong “car” to back his play. So this guy is in probably one of the worst positions that a person incarnated can be in. I wouldn’t even begin to presume that I could give him any meaningful advice. To be totally blunt, Chodron, this guy is in deep shit. The only way I ever see him getting out of PC and into general population is if he gets his security level lowered and gets moved to a less violent place. 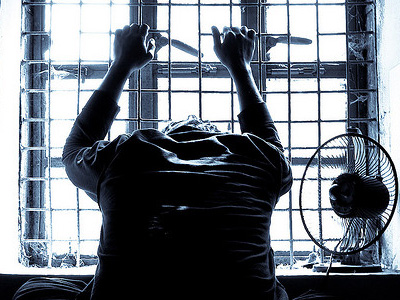 As far as me being scared while in prison; well those were the worst times of all. (Photo by Khan Mohammad Irteza)

How did I handle fear like that? Sometimes amazingly well, and sometimes pretty poorly. But fear at that level is where the primal part of a person takes over, and in that mode we are all hard to predict. I hate being scared like that. I’m glad that I am in a minimum security place now and don’t have to worry about those kinds of things anymore. When I hear people in these lower level joints talk about being bored or how lousy it is because there’s nothing exciting going on, I tell them that boring is great. The alternative to boring is Drama, and Drama is not pretty. “Exciting” is not something you want when you’re locked up. To have excitement in prison is usually a pretty bad event, something you don’t want to be around. So I tell these guys to be happy with boring. It’s the best way.

The benefits of love
A Buddhist nun in high school