An invocation of the seventeen great sagely adepts of glorious Nalanda

Concerning the teachings of the profound and vast given by the Fully Enlightened Supramundane Victor, the Buddha, the foremost sages of the Holy Land of India have, as mentioned above, composed numerous excellent, meaningful texts that can open the eyes of those possessing fine discriminative awareness. During this time more than two thousand five hundred years have passed, but still those teachings (dealing with) hearing, contemplation and meditation survive undiminished. Therefore, I recollect the kindness of those who were the cream of sages and aspire to follow them with unflinching faith.

At the present time, when in the ordinary world there is great advancement in the fields of science and technology, but we are also distracted by the hustle and bustle of our busy lives, it is extremely important that those of us who follow the Buddha should have faith based on knowledge of his teaching. Therefore, we should examine the reasons for it with an unbiased and inquisitive mind, analyzing them closely. If we are to develop faith supported by an understanding of the reasons, these excellent texts concerning the profound and vast by such renowned masters among the Six Ornaments and Two Supremes as Buddhapalita and Arya Vimuktisena are indispensable. With this in mind I have had a new thangka composed, depicting the seventeen sagely adepts of Nalanda. This collection was achieved by adding nine teachers to the existing way of depicting the Six Ornaments and Two Supremes.

Consequently, I developed an urge to compose an invocation with whole-hearted respect for each of these supreme sages and some of my aspiring Dharma friends encouraged it. This is how it came about that I, the Shakya Bhikshu, Tenzin Gyatso, who am placed in the back row of those studying the works of these sages, have composed this text Illuminating the Threefold Faith—an invocation of the seventeen great and renowned sages of Nalanda—having developed unfeigned conviction in the superb works of these sublime masters.

It was completed at Thekchen Choeling, Dharamsala, Kangra District, Himachal Pradesh, India on the 1st day of the 11th month of the Iron Snake Year in the seventeenth Tibetan rabjung, corresponding to 15th December, 2001 of the western calendar, 2545 years, according to the Theravada system, after the Buddha’s passed away.

Translated by Venerable Lhakdor and edited by Jeremy Russell in Dharamsala, February 26, 2002. 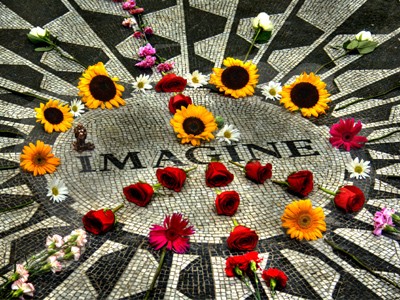 Peace and justice after September 11 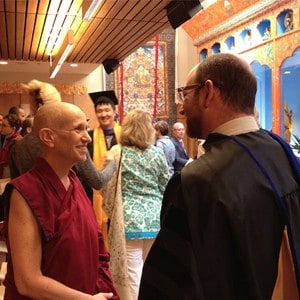 Teaching meditation in the prison system