Many people wrote that they were inspired to read about my visit last year to Michael, who is in a federal prison in Ohio. I visited him again this year, which was just as rewarding. 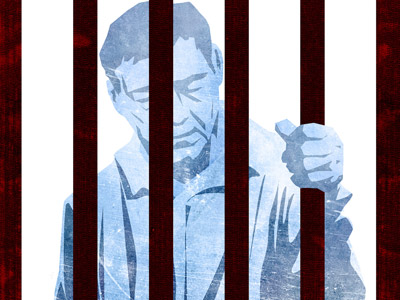 There he was, standing behind a huge metal gate with enormous bars. (Photo by Truthout.org)

He had initially arranged for me to give a talk to the Buddhist group as well as to a large assembly of men, but unexpectedly he was thrown in “the hole”—the “punishment quarters” in which the men are locked in a dingy two-person cell for all but an hour a day. If I was to see him now, it would have to be on a clergy visit, and according to prison rules, I could not do that and be a volunteer who gave a talk to an assembly at the same time. Thus, the talks unfortunately had to be canceled. (Did you really think prison rules were to help the men?)

As it turned out, two days before my visit, the assistant warden told the officers in “the hole” to let Michael out as he hadn’t done anything to merit being there to start with! So we met in an attorney’s room—a stark white room with a round table and blue chairs—off the general visiting room, for four hours on a Sunday morning.

Michael continues with his daily meditation practice and Dharma studies, as well as tries to practice in daily life—not easy in a prison environment where hostility is the norm and violence is frequent. Last year he took the eight precepts for life, and keeping them has helped him tremendously.

Our correspondence continued throughout the year: I send him questions to contemplate, he writes his reflections, and I comment on them. He has begun his 100,000 prostrations. (Anyone want to be his prostration partner and keep each other going?)

For several months, he has been asking me to do the aspiring and engaging bodhisattva ceremonies during this visit. So that morning, we discussed the motivation for taking the bodhisattva precepts and went through the eighteen root precepts, discussing their implications in daily life. Due to lack of time, we couldn’t get to the auxiliary precepts, so he will write his thoughts on how to abide by those and send them. Then we did the ceremonies in the attorney room, with him kneeling on a gray blanket on the floor and me sitting in a chair. Forget about setting up an altar, but the Buddhas and bodhisattvas were there for sure! Those of you who have taken bodhisattva precepts with me before will be happy to know that I made it through the ceremony without crying. (A crying nun was all the prison guards needed!)

While we were doing the ceremony, things felt “normal,” but afterwards when I considered what had happened, I was amazed. Imagine trying to generate even the slightest bodhicitta—the intention to become fully enlightened in order to benefit all sentient beings most effectively—in a prison environment. It’s similar to generating it in hell! I felt profoundly thankful for the opportunity to be there.

After our time together ended, Michael returned to the compound, while I waited for a guard to escort me out. Then, his mother came into the visiting room. Since he had left the room already, a guard arranged for him to meet us at the gate as we left the visiting room. There he was, standing behind a huge metal gate with enormous bars. He bent over and kissed his mother through the bars and then we turned to walk away.

My last image was of him behind the gate looking at two people he cared about leaving. My first thought was, “How sad,” but reconsidering and knowing Michael as I do, I knew that wasn’t his feeling at all.

He was feeling very full and grateful as he watched us depart. He rejoiced at what he had, rather than lamented that it was over. If only the rest of us could do that with the good things in our lives! 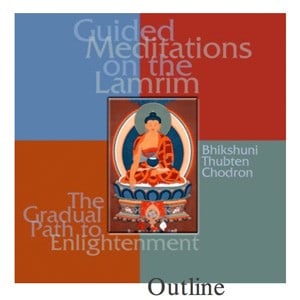 Guided meditations on the lamrim

The purpose of precepts