The situation of Western monastics

The situation of Western monastics

From Blossoms of the Dharma: Living as a Buddhist Nun, published in 1999. This book, no longer in print, gathered together some of the presentations given at the 1996 Life as a Buddhist Nun conference in Bodhgaya, India. This paper about the situation of Western monastics ordained in the Tibetan Buddhist tradition was presented at the first Conference for Western Buddhist Teachers with His Holiness the Dalai Lama in Dharamsala, India, March 1993. It was one of the stimuli for Life as a Western Buddhist Nun. 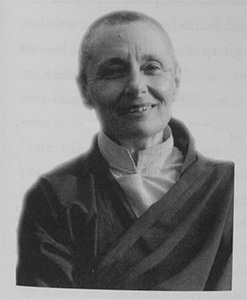 Monasticism is wonderful for some people, but it is not for everybody, nor should it be. It exists for that small group of individuals who are drawn toward the ideal of a life totally dedicated to the Dharma through the renunciation of worldly concerns and through ethical purity. As we all know, modern society is based principally on greed and promotes the view that happiness depends mainly on acquisition and the satisfaction of desire. Sex and violence rage everywhere nowadays. In contrast, the sangha is a group of monastics whose lives are based on renunciation, purity, restraint, and discipline, all of which are aimed at reducing our wants and desires. What these people do goes completely against the current of the world.

Dharma centers are not immune to the idea that “more is better.” Traditionally in the East, the sangha had the role of preserving and transmitting the Dharma. Because the people of those societies supported the Dharma, they respected the sangha; they loved the sangha and were very proud of their monastics. However, in the West, the situation is different partly because in modern times many of the scholars and meditation teachers who transmit the Dharma in the West are laity. This does not mean that the sangha is useless for the modern world. Because the sangha preserves a way of life based on Dharma principles, monastics are a living example that restraint and simplicity bring happiness and peace. They remind us that one can live with few possessions and without sex, family, or security and yet be happy and content. Monastics should have the time to devote to study and practice without having the material problems of earning a living or the emotional problems of entanglement in personal relationships based on attachment. The sangha has freedom—both physical and emotional—which is often not available to those who live a lay life.

Unfortunately, due to modern attitudes that stem from our Protestant and materialistic backgrounds, many Western Buddhists strongly feel that having close relationships, family, and career is a superior way of practicing the Dharma. Having these things, which are mostly objects of our attachment, is still projected by many Western Buddhists as being desirable, as well as providing a good opportunity to practice the Dharma by integrating it into daily life. Therefore, in the West, sangha members are seen as escapists, neurotics, and parasites, as people unable to face up to the challenge of intimate relationships. Renunciation is misunderstood and disparaged. In fact, some people consider it to be slightly perverse—because you cannot make it in the world, you renounce it, basically because it has renounced you. 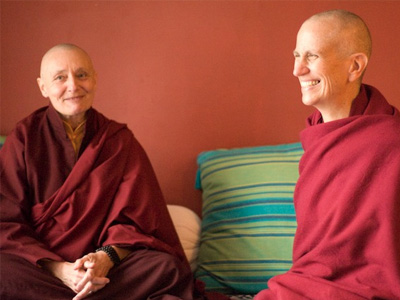 A true monastic lives without security, dependent upon the unsolicited generosity of others. This is not being a parasite—this is going forth in faith. Jesus said, “Give ye no thought unto the morrow what ye shall eat and what ye shall wear.” In a way, that is what being a member of the sangha is all about: we are not overly concerned with our physical existence and have confidence that the Dharma will provide enough for our simple needs. We have faith that if we practice sincerely, we will not starve; we will be supported not just materially, but in every way.

However, in Dharma circles in the West, the sangha lives in a kind of limbo. We are neither supported by the laity, nor by the lamas themselves. Even when monastics work for centers and are thereby supported, they are still in many ways second-class citizens. They are not given good accommodations and are treated as inferior to paying guests, who have a lot of money and can support the centers. There is very little respect or appreciation for sangha members having devoted their entire lives to the Dharma. Centers are mainly geared toward lay people and monastics are shunted to one side and considered unimportant. Or, they are overworked and expected to run centers before they have had sufficient training or experience. People expect them to be capable even if they have had little training, while they are imperfect human beings like the others.

Western sangha members also need understanding and appreciation, but they very seldom receive it. Because they often do not live in monastic communities but in Dharma centers or by themselves, they cannot do things that the lay people can do. Yet they do not have the conditions to live a monastic life either. They lose out on the pleasures of a family life, and at the same time, they have few of the joys of a true monastic life.

Some of them feel lonely; also they feel they are unable to integrate the ideals of non-attachment with seeing others as lovable. They are unsure of what friendship means in a Dharma context and feel that developing affection means becoming too involved, which is not suitable for a monastic. Because they do not have the examples of older practitioners or live in a monastic community, they do not understand how to balance the introspection necessary for Dharma practice with friendship and affection for others, which are also important for practice. Thus their practice may become sterile, and they may feel alienated from the people around them. Some feel that wearing robes alienates them from other people, that people act artificially toward them, cast them in a role, and do not see them as human beings who have problems and need moral support and friendship. Some feel conspicuous wearing robes in the street in the West because people stare and some even say, “Hare Krishna!” Because others react toward them differently, they feel they cannot help people effectively.

Also Western monastics receive very little support from the lamas. Your Holiness, this is true. Unlike in traditional Asian societies where the lay people naturally esteem and support the sangha, in the West, with our tradition of democracy and equality, this is not so. Western lay people are not encouraged to respect the sangha, at least not the Western sangha. The lamas do not teach their lay students that this is part of their practice. Thus, the lay people look at Western monastics and think, “Well, who are they?” and have little sympathy or appreciation for what they are trying to do. The lamas take good care of their own Tibetan sangha. They build monasteries and train the monks. When Tibetans are ordained, they have a support system. There is a monastery they can enter and the society respects their decision to live a monastic life. For the Western sangha, this is largely non-existent. The lamas ordain people, who are then thrown into the world with no training, preparation, encouragement, support, or guidance—and they are expected to keep their vows, do their practice, and run Dharma centers. This is very hard, and I am surprised that so many of the Western monastics stay for as long as they do. I am not surprised when they disrobe. They start with so much enthusiasm, with so much pure faith and devotion, and gradually their inspiration decreases. They get discouraged and disillusioned, and no one helps them. This is true, Your Holiness. It is a very difficult situation, which has never before occurred in the history of Buddhism. In the past, the sangha was firmly established, nurtured, and cared for. In the West this is not happening. I truly do not know why. There are a few monasteries—mostly in the Theravada tradition and a few in other traditions—which are doing well, but for the nuns what is there? There is hardly anything, quite frankly.

But to end on a higher note, I pray that this life of purity and renunciation which is so rare and precious in the world, that this jewel of the sangha may not be thrown down into the mud of our indifference and contempt.

(At this point, His Holiness remains silent. He then puts his head in this hands and weeps, as the audience sits speechlessly. After several minutes, he raises his head and says, “You are quite brave.”)

Born in England in 1943, Bhikshuni Tenzin Palmo joined the Buddhist Society in 1961 and went to India in 1964. There she met her principal teacher, Venerable Khamtrul Rinpoche, a Drukpa Kagyu lama, in whose community she studied and worked for six years. In 1967, she received sramanerika ordination from Gyalwa Karmapa and in 1973, bhikshuni ordination in Hong Kong. In 1970, she began a twelve-year retreat in a cave in the mountains of Lahaul, India. In 1988, she moved to Italy where she also did retreat. Now she teaches internationally and is establishing Dongyu Gatsel Nunnery in Tashi Jong, India. This paper about the situation of Western monastics ordained in the Tibetan Buddhist tradition was presented at the first Conference for Western Buddhist Teachers with His Holiness the Dalai Lama in Dharamsala, India, March 1993. It was one of the stimuli for ‘Life as a Western Buddhist Nun’. (Photo by Tgumpel) 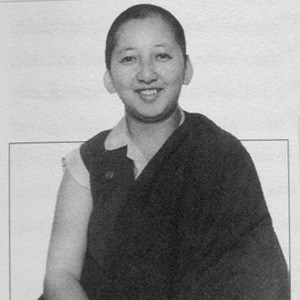 Audience with His Holiness the Dalai Lama